At its core, the Ukraine story is about Rudy Giuliani’s effort to remake the United States in Ukraine’s image.

He’s doing that in two related ways. First, he’s trying to discredit the very notion of investigating a billionaire politician for using his position for personal profit. And, he’s trying to legitimize the selection of top law enforcement officers in a given country based on whether they investigate the political opponents of said billionaire politician.

Which is why it’s so interesting that, yesterday, Barr responded to a question about Rudy’s alleged crimes by refusing to comment on “the shenanigans” “going on inside the Beltway.” 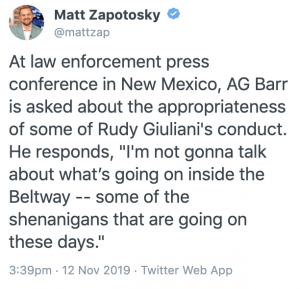 Curiously, WaPo’s Matt Zaptosky didn’t reveal that he asked this question, rather than asking Barr about his own obstruction of the investigation into the whistleblower complaint. In many ways, Barr’s activities are even more inappropriate, and it’s time DOJ beat reporters started reporting on that fact.

Rudy and Barr are simply mirror images at this point, both engaged in efforts to turn law enforcement into the tool of one or more corrupt oligarchs. And in his response, Barr suggests that the locus of activity in question is not Madrid or Vienna or the Trump International or any other location where Rudy has held meetings in the service of turning law enforcement into a political tool, but the Beltway, where impeachment is happening.

Which is why I think it’s time to stop calling Barr the “Attorney General of the United States,” and instead, to start calling him the “Prosecutor General,” the term Ukraine uses to refer to the series of prosecutors Ukraine has had who serve the interests of corruption and self-dealing rather than serve law enforcement. After all, Barr was the oligarch-President’s hand-picked choice to come in and not just thwart investigations into the President’s own self-dealing but also to launch investigations into anyone who challenges the President.

Sure, Barr might still believe he’s doing this in the name of corruption. But that’s only true because in the echo chamber he occupies, daring to investigate organized crime amounts to corruption.

As AG, Barr is no better than the corrupt prosecutors that the US has long lectured other countries about. And as such, we should start referring to him using the title he has earned, Prosecutor General.

Update: Zapotosky reported on a question some other reporter (whom he doesn’t credit) asked at that event.

Attorney General William P. Barr said Wednesday that he did not remember President Trump ever asking him to hold a news conference declaring the commander in chief broke no laws in a controversial phone call with the leader of Ukraine, but he acknowledged discussions with the White House on how his department would communicate to the media about the matter.

At an event in Memphis about a Justice Department crackdown on gun violence, a reporter inquired, “Mr. Attorney General, did the president ask you to publicly defend him regarding the Ukrainian call, and if so, why did you not want to do that?”

“If you’re talking about press reports that he asked me to have a news conference, the fact is, I don’t remember any such request,” Barr said. “In fact, my recollection is that I told the White House that we would do what we would normally do, and that is issue a press statement, which we did, and that was not an issue. There was no pushback on that.”

This is basically confirmation that he provided what the White House asked — an exoneration — but that he delegated the actual statement.

The 900 Pages of George Nader Testimony the Government Wants to Keep Hidden BREAKING: The First Amendment Is Part of Something Called the Constitution