Was Chris Ruddy a Second Back Channel between Manafort and Trump?

It also includes Chris Ruddy’s 302 (starting at PDF 58). As DOJ has been doing with most 302s, they’ve left mostly stuff that showed up in the Mueller Report unredacted, hiding the rest under deliberative (b5) exemptions.

But I’m interested in Ruddys’ 302 because four paragraphs that show a b7ABC redaction, which mostly has been used to hide stuff pertaining to Roger Stone. 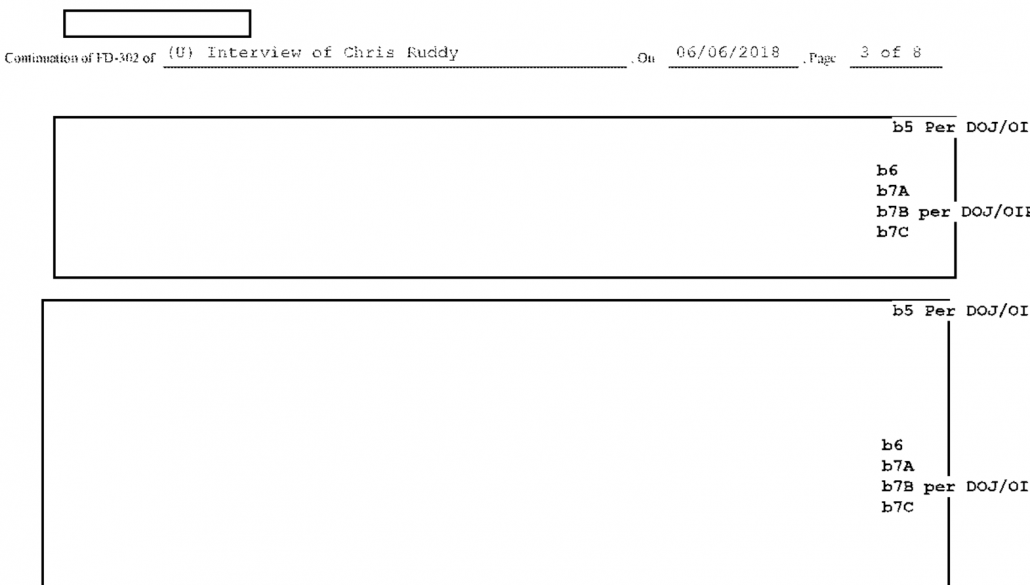 I doubt this redaction pertains to Stone, though, at least not exclusively.

As I noted last June when Amy Berman Jackson liberated the Sean Hannity texts with Manafort, she withheld another set of communications (probably showing Kevin Downing reached out to the media, as he had done with Hannity, which is why they were submitted as part of Manafort’s sentencing). She withheld the other texts because of an ongoing proceeding.

At the time, I suggested that the other proceeding might pertain to Chris Ruddy because:

All that provides one possible explanation for why Manafort decided it’d be a good idea to put his lawyer directly in touch with Hannity, in violation of her gag order. But that doesn’t explain the other reason ABJ decided not to release the second set of texts: some “ongoing matters” that require the communications remain secret.

There’s one other notable date in that time period. As I’ve noted, the Downing – Hannity discussions came just before Howard Fineman reported, on January 30, 3018, not only that Trump planned to beat Mueller by having Sessions investigate him…

Instead, as is now becoming plain, the Trump strategy is to discredit the investigation and the FBI without officially removing the leadership. Trump is even talking to friends about the possibility of asking Attorney General Jeff Sessions to consider prosecuting Mueller and his team.

… But also reported that Trump was confident that Manafort would not flip on him.

He’s decided that a key witness in the Russia probe, Paul Manafort, isn’t going to “flip” and sell him out, friends and aides say.

Chris Ruddy was one source for the Fineman story. And Ruddy was interviewed by the FBI about his knowledge of Trump’s efforts to obstruct justice on June 6, 2018, the day after the FBI extracted the Hannity texts from Manafort’s phone.

If you’re going to contact one of Trump’s close media allies — Hannity — to send Trump an ultimatum about Manafort and get the media person on board for a plan to undercut Mueller, you’re likely to contact Trump’s other closest media ally, Chris Ruddy.

None of that answers what Downing had to explain to Hannity and what the ongoing proceeding might be. But it does suggest that Ruddy was in the same kind of discussion circle in January 2018 as Hannity was.

The four paragraphs in Ruddy’s 302 that, nine months after Mueller finished remain redacted because of an ongoing investigation, suggest my speculation was probably right, and that the ongoing proceeding pertains to communications between either Manafort or Downing back before Howard Fineman reported that Trump had confidence that the one witness who might hurt him, Manafort, would not flip on him.

I’m not sure what ongoing proceeding that would entail. And if Manafort was also using Ruddy as a back channel to Trump, it would mean his later testimony was false, because he didn’t also admit to using Ruddy in that fashion.

tweets from our circle
emptywheel@emptywheelFor those interested in the TECHNICAL aspects of the Sussmann trial, I'm trying to stick the most informative mater… twitter.com/i/web/status/1…5 minutes ago24 May 2022
emptywheel@emptywheelStarting a new thread for the first part of Gaynor's cross. Gaynor is the third Durham witness who was obviously co… twitter.com/i/web/status/1…58 minutes ago24 May 2022
bmaz@bmazWho? Source: Commanders spend $100M on Va. land espn.com/nfl/story/_/id…7 hours ago24 May 2022
bmaz@bmazRT @LemonSlayerUS: @MatorinLaw @bmaz @MrKovalenko @SecDef Better than getting this promotion.👇 pic.twitter.com/pVxEw8lnlg7 hours ago24 May 2022
Jim White@JimWhiteGNVRT @bettycrackerfl: I’d like a full accounting of how much FL taxpayers have paid to lawyers defending the shoddy work products signed by @…8 hours ago23 May 2022
Ed Walker 🍞🌹💉💉@MasaccioEWRT @RedEyedDespair: Damn that's crazy, why aren't you fighting for healthcare then twitter.com/TheDemocrats/s…12 hours ago23 May 2022
Ed Walker 🍞🌹💉💉@MasaccioEWRT @tribelaw: Alito’s Five Fallacies: 1. Women’s lives won’t be turned upside down 2. We are just returning this issue to the states 3. “On…14 hours ago23 May 2022
Ed Walker 🍞🌹💉💉@MasaccioEWRT @josefmtz: this paragraph is brutal. we truly are in an “emperor has no clothes” point in history pic.twitter.com/XWhBwdMdH315 hours ago23 May 2022
RayneToday@raynetodayLOL Perhaps the mythical "single server" the right-wing wanted turned over after the DNC was hacked already resides… twitter.com/i/web/status/1…2 days ago22 May 2022
RayneToday@raynetodayRT @darth: i know this is completely unrelated but imagine spending nine fuckin hours with that guy3 days ago21 May 2022
RayneToday@raynetodayRT @wyatt_privilege: Not a mind blowing observation but the game now is to send crazy shit upstairs to scotus and invite them to remold, sc…5 days ago19 May 2022