The Stakes and Misinformation about the Andrew McCabe Declination

Amid the other crazy events of the week, DOJ informed Andrew McCabe he would not be prosecuted as a result of the criminal referral arising from DOJ IG’s finding that he lacked candor when asked about an October 30, 2016 Devlin Barrett story.

While it’s possible the Tuesday Afternoon Massacre and Jessie Liu’s removal had some role in the timing of this notice, one thing is clear: McCabe got notice primarily because Judge Reggie Walton had imposed a deadline in a CREW FOIA to release some transcripts about the stalled decision-making process. Probably, DOJ made the decision last fall after a grand jury refused to charge McCabe, but stalled on giving McCabe notice because DOJ knew it would piss off Trump. But since the court transcripts would reveal some of that, the FOIA deadline finally forced DOJ’s hand.

In the aftermath of the McCabe news, a bunch of frothy Republicans, including Chuck Grassley, have analogized the investigation into McCabe with the investigations into Roger Stone (for conducting a two year cover-up, including making threats against a witness and a judge) and Mike Flynn (for lying multiple times to the FBI, continuing to fudge the truth in the ongoing investigation, and lying to hide that he was on Turkey’s payroll at a time when he was Trump’s top national security advisor). Even taken on their face, that’s a ridiculous comparison, one that dismisses the import of threatening judges and secretly serving as agents for frenemy governments while receiving intelligence briefings. The accusations against the men are different, with a lack of candor allegation against McCabe versus lying against the others, and egregious mitigating factors implicating national security with the others. Whereas grand jury reportedly refused to even charge McCabe, a jury found Stone guilty of every count with which he was charged.

More importantly, the comparison has treated the allegation against McCabe with a seriousness that the underlying record — as laid out in McCabe’s lawsuit against DOJ — does not merit.

And McCabe’s lawsuit may provide a partial explanation for why DOJ stalled so long before declining to prosecute the case. That’s because a key part of DOJ’s defense against McCabe’s lawsuit is that they could or even had to move so quickly to fire McCabe because there was reasonable reason to believe that McCabe had committed a crime for which he could be imprisoned.

Mr. McCabe was given seven days to provide oral and written responses to the notice of proposed removal to ADAG Schools. That response period was a departure from the 30-day response period more frequently provided for a proposed removal. But FBI policy governing the removal of Senior Executive Service (SES) employees provides that “if there is reasonable cause to believe the employee has committed a crime for which a sentence of imprisonment can be imposed, the advance notice may be curtailed to as little as seven days.” FBI SES Policy at 16 (attached as Ex. 2). Given the Inspector General’s findings that Mr. McCabe lacked candor under oath, findings which Assistant Director Will seconded after her independent assessment, there was reasonable cause to believe that Mr. McCabe had committed a crime for which a sentence could be imposed—and, therefore, a sound basis for affording Mr. McCabe seven days to respond.

DOJ has excused their rush to fire McCabe based on having reasonable grounds to believe he could be prosecuted for lies, but the rush to fire McCabe resulted in DOJ ignoring clear evidence that the IG Report was fundamentally flawed in a way that easily explains why a grand jury would refuse to indict. So the lawsuit, if McCabe gets discovery, is likely to show that he was rushed out the door to prevent him from building the case that he was being rushed out the door based on a case riddled with problems.

When the IG Report came out, I found it pretty compelling and therefore the criminal referral understandable (though I did not believe criminal charges would be upheld), even while noting the big push to make that happen before McCabe retired delegitimized it. But now it’s clear that the report didn’t get the normal level of pre- and post-publication review, McCabe’s OPR process was rushed to beat his retirement deadline, and had either of those processes been conducted in the normal fashion, they would have likely caught significant problems with the report.

Indeed, McCabe presented compelling evidence — even in a very rushed written response submitted to OPR hours before Jeff Sessions fired him — that he had at least colorable explanations to rebut the IG Report allegations. 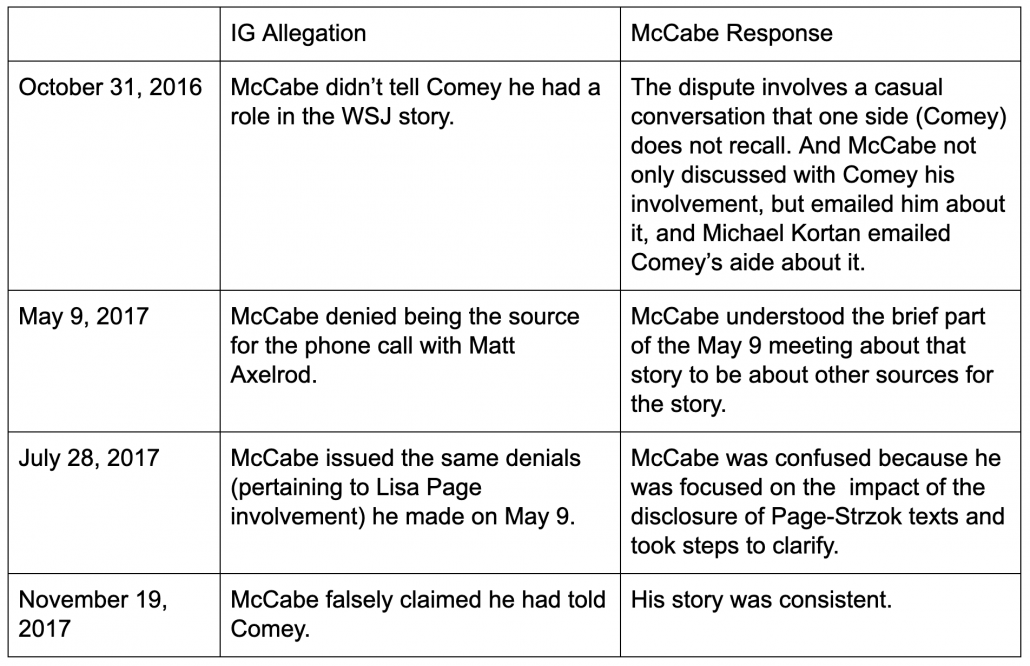 As laid out, the IG Report accused McCabe of lacking candor about two kinds of things: first, whether he had told Comey he was a source for the WSJ story, and what role he and Lisa Page had in the story. Both the middle meetings — May 9, 2017, hours before Comey’s firing and his ascension to Acting Director, and July 28, 2017, in the context of a meeting about the discovery of the Page-Strzok texts — were on two of the most momentous days of McCabe’s career. The other two pertain to whether or not McCabe told Comey about his involvement in the WSJ story, which the IG Report portrayed as a difference of opinion about a casual meeting the two had, about which the IG sided with Comey’s version.

Thus, to a significant degree, the question of McCabe’s candor pivoted on whether he had really told Comey he was involved in the WSJ story.

And, as McCabe alerted OPR before he got fired, the IG Report included no mention of one of the most central players in the October 2016 WSJ story, FBI’s Assistant Director of Public Affairs Michael Kortan, with whom McCabe worked closely on the WSJ story. In other words, the IG Report suffers from the kind of egregious failure to include exculpatory information that it just took FBI to task about in the Carter Page IG Report (which also happens to be true of the Carter Page IG Report generally and its treatment of Bruce Ohr specifically). So when the IG Report sides with Comey’s version of the story because,

no other senior FBI official corroborated McCabe’s testimony that, among FBI executive leadership, “people knew generally” he had authorized the disclosure,

The Report can only make such a claim because it entirely left out the testimony of one of the most central players, Kortan. And as McCabe has made clear, in the OPR adjudication, his team did not get the exculpatory information involving Kortan until two days before the final decision.

Reports of why the grand jury refused to indict have pointed to Kortan’s testimony, and it’s clear why: because his testimony totally undermines the conclusions of the IG Report and therefore any basis to indict him.

Most importantly, McCabe submitted an email showing that he informed Comey (and some of the other senior FBI people whom the IG Report claimed didn’t know he was involved) that he was involved in the WSJ story. 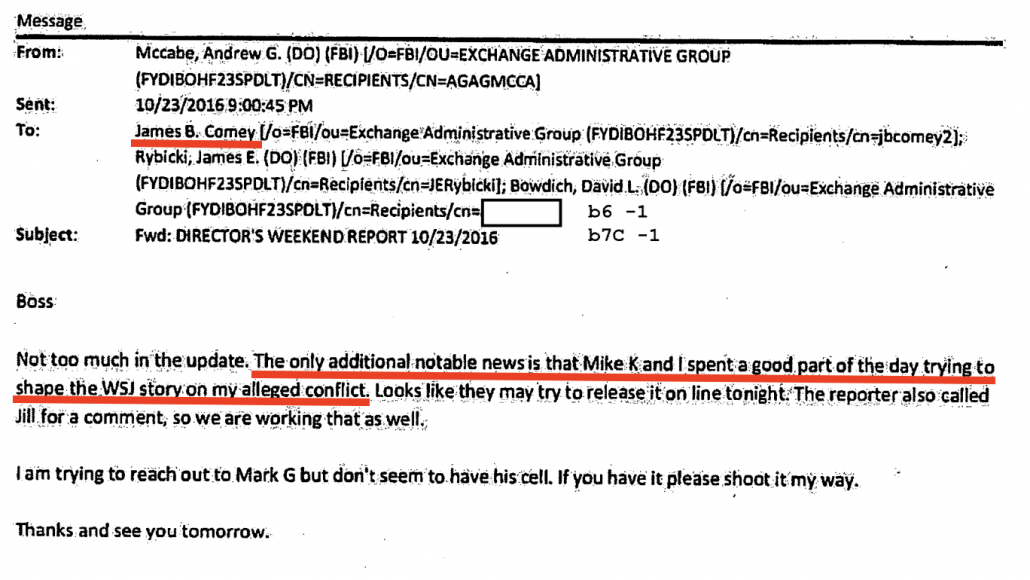 With the declination of McCabe, DOJ has admitted that a key reason they claim to have relied on (a claim McCabe disputes) on rushing McCabe’s firing is false: he’s not likely to face prison time, because a grand jury won’t even indict him. And that may increase the chances that McCabe will get to prove precisely why he was rushed out the door with Trump screaming about him all the way.

SSCI Has Already Dismissed One of the Key Issues John Durham Is Investigati... The Nonmoderns