Trump’s new spox, Kayleigh McEnany, got hired because she’s willing to say any thing, regardless of how stupid.

Consider her claim that Trump is doing a great job because the US has now conducted 3.3 million coronavirus tests. 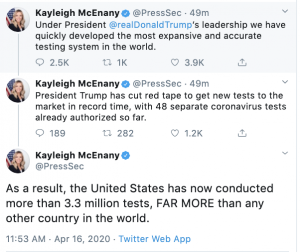 Ignore for a second what would be the appropriate amount of testing for a country of 320 million people that didn’t catch the outbreak before it spread widely (per person, we’ve done half of what Germany has done).

Back on March 6, which was over a month ago, Alex Azar said that the government would roll out 4 million tests by the following week (which would be March 13, which is also over a month ago). By my math, a month later, they’re still 700K tests off their promise, 17.5%.

In other words, McEnany is bragging that the Trump Administration still hasn’t met the promises they made a month ago.

Update: According to NBC, 41 days after making a promise on testing they still haven’t delivered, Trump is “close” to announcing a plan to do what should have been the priority two months ago.

A senior administration official said the White House is “close” to making an announcement on a plan.

But that plan still doesn’t include the single most thing Trump could do to restart the economy.

Another idea that’s been discussed would use the Defense Production Act to rapidly scale up testing, according to one person familiar with the discussions, though officials played down the idea given that Trump has been resistant to more consistently deploying that presidential power since he would rather use the law as leverage to get companies to take such steps.