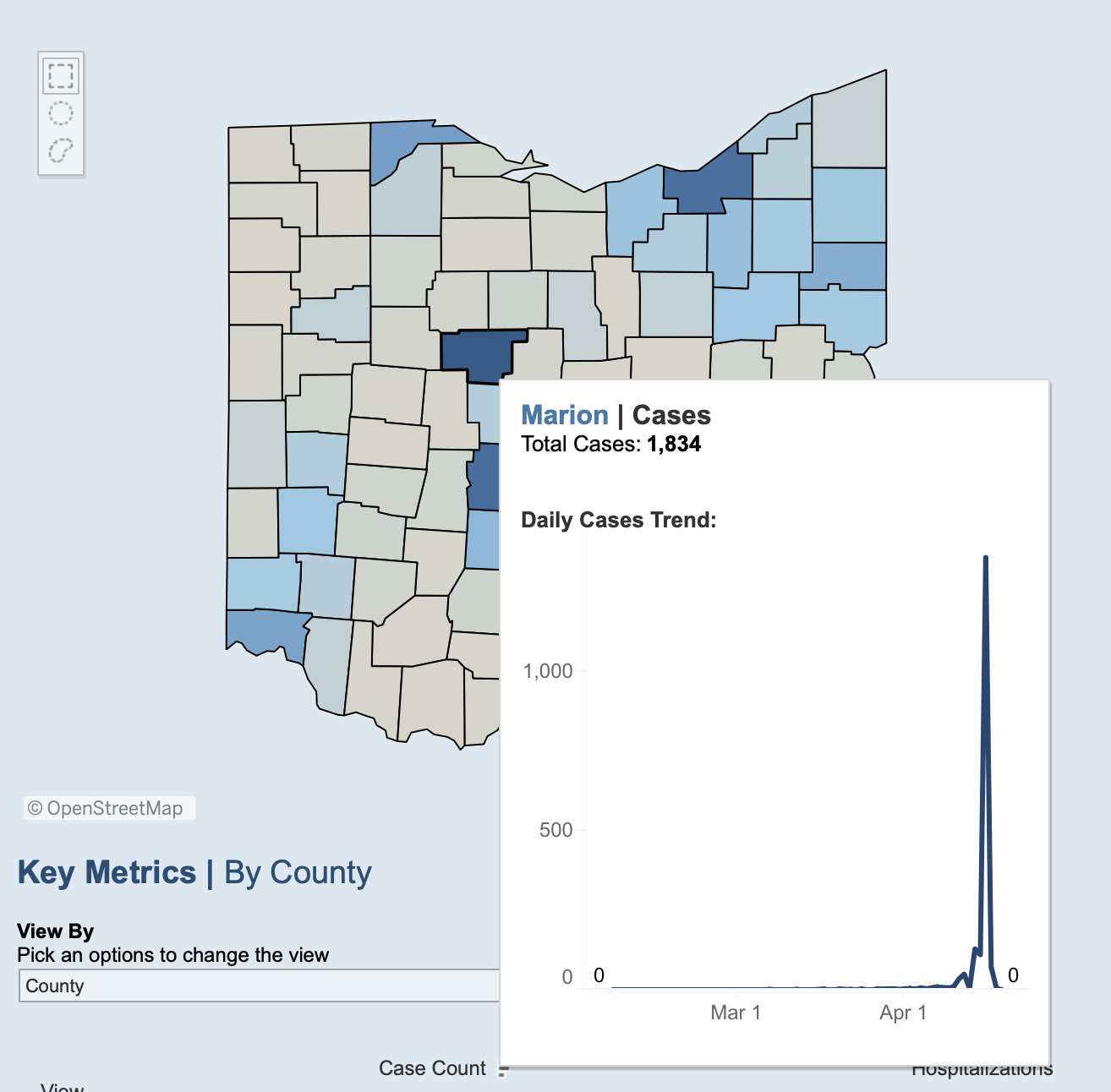 Given shortages on testing, there have been just a few populations exposed to coronavirus in the US that have all been tested. Among the first cruise ships to be tested, up to 19% of those on board tested positive. 660 members of the crew of the USS Teddy Roosevelt have tested positive, about 13% of the crew. At the Kirkland Life Care Center, 67% of residents tested positive by March 27.

In Marion Prison in Ohio, two months into this crisis, an astounding 1828 — around 73% — of prisoners have tested positive, per Ohio’s official numbers.

I have no reason to believe that Ohio’s Governor Mike DeWine conducted this experiment intentionally — or even considers it an experiment at all. This is data the state needs to understand how to deal with COVID. His medical officer, Amy Acton, has been first rate. I assume that as Ohio considered the areas where their aggressive response hasn’t succeeded in stopping the spread of COVID, the prisons in the state were one of the most obvious failures (the federal prison at Elkton, Ohio has an official count of 50 inmates who have tested positive, with 6 who have died, though federal prisons aren’t testing everyone). And so the state decided to test everyone at three different institutions.

*DRC has taken an aggressive and unique approach to testing, which includes mass testing of all staff and inmates at the Marion Correctional Institution, the Pickaway Correctional Institution, and the Franklin Medical Center (which is Ohio’s medical facility for inmates). Because we are testing everyone – including those who are not showing symptoms – we are getting positive test results on individuals who otherwise would have never been tested because they were asymptomatic. The total tested and total pending are part of the large mass testing currently underway. Pickaway staff testing will begin the week of April 19, 2020. Once all of those results are received, these columns will be filled. Positive and negative results are still being reported and are current as of this posting.

Thus far, the positive rates in the other two facilities are lower than at Marion. While I’m not convinced all the Marion prison cases get included in the Ohio count right away, as of now, almost 16% of the Ohio’s cases are in Marion prison. 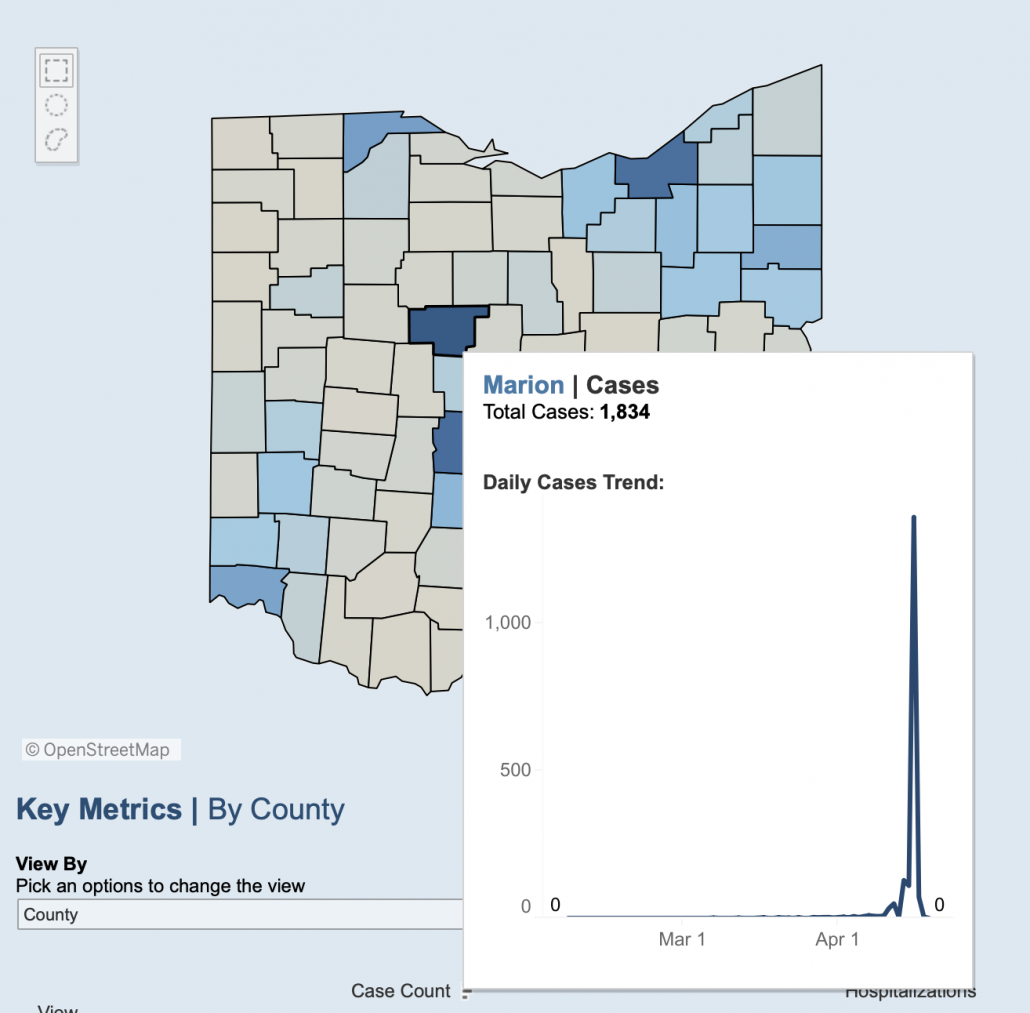 Whether intentionally or not, Ohio will soon begin to understand what happens when COVID spreads in an enclosed space with a younger population and — in the weeks ahead, what percentage of those men will weather the exposure without deathly symptoms, and then, what percentage of those men have antibodies that suggest they might be able to leave in a prison rampant with the virus with some kind of immunity.

At a minimum, the Marion prison experience shows that — even with two months of warning — without testing, spread of the disease inside closed quarters, will outrun any attempt to generate herd immunity, presumably because the lag between getting the disease, exhibiting symptoms, and developing immunity is too long.

Ohio is collecting necessary data. Better to collect it and identify all the people that might need medical treatment, then pretending the problem is not as bad as it is, which is what virtually all other prisons are doing. The data will help Ohio understand what’s happening at all of its prisons and make informed decisions as a result. One reason DeWine’s response in Ohio has been so good is that he has followed the data.

But having it will create ethically fraught policy questions, particularly in places where those making policy decisions have already shown an inclination to put economic decisions over health considerations.

It poses some pretty troubling policy considerations. While 109 guards at Marion have also tested positive (244 guards in state prisons across Ohio, as well as 38 at Elkton), it’s not yet clear whether the guards have contributed to clusters in surrounding communities — though that’s another thing Ohio will learn as it tests all the Marion population. No prisoner at Marion has yet died (one staffer has). Effectively — again, I’m not saying that this was at all intentional — Ohio is testing whether it’s possible for certain, younger enclosed populations to just weather this illness.

The thing is, I suspect something similar may be happening in other clusters where entire populations will be tested, one where ethical considerations won’t be aired publicly. Will meatpackers, for example, decide that their workers are so expendable that losing ten or so, but then reopening a plant with an immune workforce, is worth the human cost? if they do, we’re unlikely to find out they’ve made that decision anytime soon.

Given the disproportionate impact of this disease on the poor and those who live or work in confined spaces, especially people of color in both populations, given the political stakes Republicans are placing on proceeding as if a pandemic doesn’t change ordinary politics, as more populations like the one in Marion do tests of the entire population, will present ethical questions that our society is in no way prepared to handle.

Trump Blames Mueller for Woes Mike Flynn Brought on Himself On Trump’s COVID Rallies: Lying and Bullying Are Different Things