In an Attempt to Absolve Mike Flynn, Eli Lake Accidentally (and Erroneously) Accuses Flynn of “Outright Espionage,” Then Lies about the Evidence

As part of the campaign to magnify the cover story for Mike Flynn, Eli Lake has written a long, prettily edited piece laying out the same narrative everyone else uses. It has drawn applause from the typical facilitators of gaslighting: Maggie Haberman, Jonathan Swan, and Pepe the Frog. 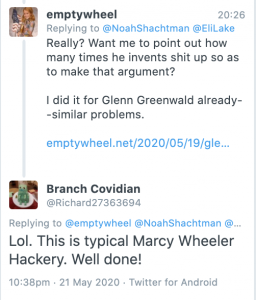 But it also got plaudits from someone who normally cares about accuracy and facts as much as pretty narrative, Noah Shachtman, which led me to do a long thread pointing out all the times Eli misrepresented the record or outright lied about it. You can read that thread or read the post I did on Glenn Greenwald’s attempt to defend Flynn and Bill Barr, because Eli makes many of the same false claims that Glenn did, as if there’s a script these men are working from.

Unlike Glenn, though, Eli performs the entire Logan Act part of the script. He claims, as if reading from a Sidney Powell script, that the FBI researched the Logan Act solely to keep any case against Flynn alive.

Bringing up this old chestnut suggests that the FBI was looking for any conceivable pretext to keep its Flynn hunt alive. To that end, the FBI officer overseeing the Flynn case, Peter Strzok, eagerly provided a Congressional Research Service report on the history and utility of the Logan Act to FBI lawyer Lisa Page, who was working in the office of Comey’s deputy, Andrew McCabe.1 In his 2019 memoir, McCabe writes that in “high-level discussion at the relevant agencies and at Justice, the question arose: Was this a violation of the Logan Act?”

And then he points to two more references to the Logan Act in support of a claim that the FBI was considering it.

Then Eli steps in it.

Moreover, a recently declassified “scope memo” on the Mueller probe—a document defining the range of issues Mueller was to examine—drafted on August 2, 2017, by then Deputy Attorney General Rod Rosenstein authorized Mueller’s team to investigate whether Flynn had “committed a crime or crimes by engaging in conversations with Russian government officials during the period of the Trump transition.” The only crime or crimes that could be found in this case would either be outright espionage or a violation of the Logan Act.

Here’s the document in which Eli claims to see Flynn investigated for “outright espionage.”

Somehow, Eli skips the opening memo for the Flynn investigation, which names the crimes actually under investigation in August 2016 (and still, on January 24, 2017, along with the Logan Act): FARA and 18 USC 951. Had Eli examined that memo, his entire Logan Act canard would have been clear, and his silence about the evidence showing that the Flynn interview always prioritized Foreign Agent component would be more damning.

The goal of the investigation is to determine the captioned subject, associated with the Trump Team, is being directed and controlled by and/or coordinating activities with the Russian Federation in a manner which may be a threat to the national security and/or possibly a violation of the Foreign Agents Registration Act, 18 U.S.C section 951 et seq, or other related statutes.

It is true that early in 2017, the FBI had decided Flynn’s calls with Russia did not make him a Foreign Agent of Russia (though later obtained evidence may have changed that view). And the Foreign Agent investigation listed in the 2017 memo focused on Flynn’s hidden relationship with Turkey, not Russia.

Nevertheless, in an attempt to defend Flynn, Eli Lake either lies or appears to describe 18 USC 951 as “outright espionage.”

If 18 USC 951 is “outright espionage,” as Eli claims, then an “outright espionage” charge is what Flynn was avoiding when he pled guilty to the false statement charge that Eli is now misrepresenting. Here’s how Brandon Van Grack explained that to Judge Emmet Sullivan at Flynn’s aborted sentencing in 2018.

THE COURT: And that would have been — what’s the exposure in that indictment if someone is found guilty?

THE COURT: Could the sentences have been run consecutive to one another?

MR. VAN GRACK: I believe so.

THE COURT: Right. Exactly. I’m not minimizing that at all. It’s a five-year felony.

THE COURT: Excuse me one second. (Brief pause in proceedings.)

According to Flynn’s own sworn statement, that 15 year sentence is what Covington’s lawyers advised he might be facing if he didn’t take a plea deal that (if Flynn behaved) would result in probation.

November 16, 2017, was the first day of the proffer with the SCO. That same evening, after concluding the first proffer, we returned to the Covington offices where my attorneys told me that the first day’s proffer did not go well and then proceeded to talk me through a litany of conceivable charges I was facing and told me that I was looking at the possibility of “fifteen years in prison.”

That Eli considers Flynn’s exposure to 18 USC 951 because he was secretly on Turkey’s payroll “outright espionage” is telling, because — way at the end of the story, as if the Turkish investigation didn’t happen in parallel with the Russian one — Eli finally gets around to mentioning it. When he does, Eli outright lies about the record on Flynn’s work for Turkey. First, he lies that Inovo was the client, not Turkey.

The reason that Flynn put his name to something he knew was not true was that Mueller’s investigators were squeezing him on an unrelated matter.

In August 2016, Flynn took a contract to represent a Dutch firm known as Inovo BV on a project aimed at investigating and defaming Fetullah Gulen, a charismatic Turkish cleric who had become a mortal enemy of Turkey’s president, Recep Tayyip Erdogan, and was living in exile in Pennsylvania. In 2016, Erdogan survived a military coup he blamed on Gulen’s followers. Erdogan’s regime sought Gulen’s extradition back to Turkey, where he would almost certainly have faced the death penalty.

Taking that contract showed horrendous judgment on Flynn’s part. He was the Trump campaign’s national-security adviser and had no business getting himself in the middle of this. That said, it was a potential political problem for Trump, not the national-security threat that many in the resistance now say it was. It’s fair game for journalists and Democrats to make a stink about the Inovo contract. But it was highly unusual for Flynn’s missteps in this case to be the basis for a criminal prosecution on the grounds that Flynn had violated the Foreign Agents Registration Act (FARA).

According to Flynn’s grand jury testimony — almost the only sworn statement that Flynn has not reneged on yet — the work was always being done for Turkey.

Q From the beginning of the project what was your understanding about on whose behalf the work was going to be performed?

A I think at the — from the beginning it was always on behalf of elements within the Turkish government.

Q Did he ever mention to you that the project had significantly changed in any way? A He d.id not, no. No, we pretty much stayed on the same track.

Q Did he ever mention to you that the principal beneficiary of the project had changed?

Q Let me finish the question if you it be fair to say, as you testified would, General. So would earlier, that the principal beneficiary was the government of Turkey?

Q Or these high-government officials?

Flynn’s testimony describes how, after Ekim Alptekin said the Turkish clients had given him permission to discuss “confidentiality” and budget with Flynn, just days before Flynn sat in on his first classified candidate briefing with Trump, the named client changed to Inovo.

Q Do you see the first part of the email where Mr. Alptekin says, “Gentlemen, I just finished in Ankara after several meetings today with Min. of Economy Zeybekci and M.F.A. Cavusoglu. I have a green light to discuss confidentiality, budget, and the scope of the contract”?

Q Is this email an example of how Turkish government officials provided the initial approval for the project?

Q Originally what was the planned source of funding for the project?

A Initially I was told that the Turkish government would likely — you know, may fund it. And then it changed when that came back that they would not fund it, that it would be funded, you know, via different means, via Ekim’s business, basically.

Q Who told you that the Turkish may fund the project originally?

A Bijan. Conversations we had.

Q Do you recall the name of Mr. Alpteikin’s company?

Not only does Eli outright lie about whom Flynn was working for, he misrepresents the source of Flynn’s registration problems, the reason they became so acute he faced 15 years in prison over them.

Flynn had initially registered the Inovo contract in August 2016 through a less stringent law known as the Lobbying Disclosure Act. He did so on the advice of his counsel at the time. And when Flynn took the contract, that advice was sound. The legal environment for FARA registrations was quite permissive at the time. But at the end of 2017, and with Mueller in hot pursuit and with unlimited resources, Flynn—and his son, Michael Jr.—could have found themselves facing years in prison. So Flynn, in financial ruin and wishing to get his son out of Mueller’s crosshairs, agreed to cooperate.

Eli doesn’t explain that in March 2017, after Trump had been elected, after Flynn had engaged, as incoming National Security Advisor, in discussions about a Russian-Turkish peace plan for Syria, after Flynn had been fired for hiding details of his conversations with Russia, Flynn registered under FARA, but even then lied about having worked for the Turkish government until days before he became National Security Advisor.

This was not, as Eli falsely portrays, about misrepresenting work for a foreign company. It wasn’t even just that, as Flynn, with his Top Secret clearance, was sitting in on Trump’s first classified briefing, he was also inking a deal to secretly work for Turkey. It’s that Flynn continued to lie about it, even in his official FARA filing in March 2017.

And claimed national security hawk Eli Lake, in a bid to make Flynn look less sketchy, repeats the very same lies that got Flynn in such deep legal trouble, Flynn’s cover story for his relationship with the government of Turkey.

It’s one thing to work for foreign entities and hide that fact if you’re a washed out campaign pro, as Paul Manafort was when he hid that he was secretly working for Ukraine’s ruling oligarchs for years. It’s another thing to sit in on classified briefings with a man running for President while hiding that you’re in talks with Turkish government ministers for a half-million dollar deal.

Eli, in a moment of candor or sloppiness, called this “outright espionage.”

That’s Eli’s representation, not mine. In reality, 18 USC 951 is more ambivalent than that, covering a range of secret relationships with foreign governments. But if the facts of Flynn’s relationship weren’t so damning, then why did Eli lie so aggressively to hide them?

Update: Meanwhile, Flynn’s Turkish handler is outraged that the IC might have read his communications with Flynn.