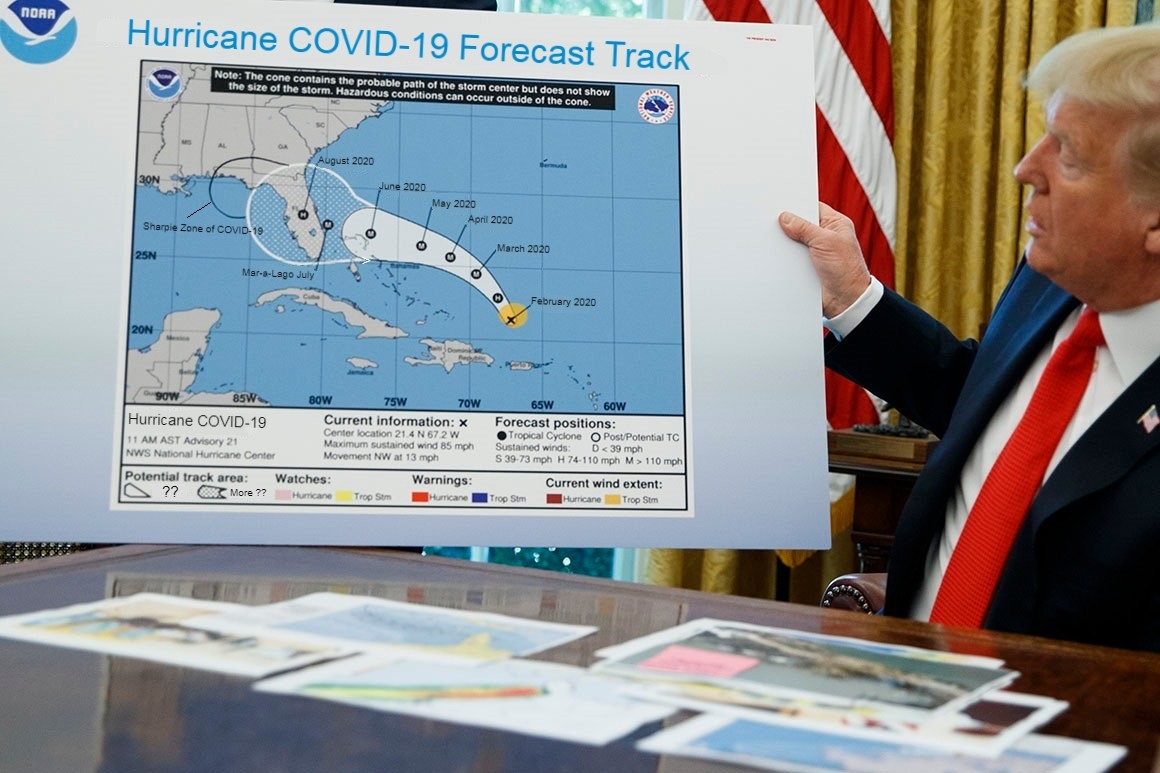 Here’s the topic Donald Trump and the Republican Party are doing everything they can to avoid:

It’s also the single biggest reason not to vote for Donald Trump.

I think Drew Gibson put it best in a tweet today:

We still have roughly 40,000 new cases of COVID-19 a day due to this administration’s colossal incompetence and they’re playing a video of Nancy Pelosi getting her hair done like it’s the goddamn Zapruder film. https://t.co/nBEshTT01Z

The White House can put all the spin on their “Zapuder tape” they want. It won’t change the fact we can see they are killing us through police brutality and COVID-19.

It won’t change the fact Joe Biden was welcomed in Kenosha by community leaders, spoke with shooting victim Jacob Blake and met with Blake’s family — none of which insensitive racist Trump could bring himself to do.

It won’t change the fact Trump failed to boost U.S. manufacturing as he promised in 2016. Instead he set off an unnecessary trade war implementing tariffs which not only inflated consumer prices in the U.S., damaged demand for U.S. commodities, but encouraged the burning of Amazon rain forest for farmland in Brazil, which sold more soybeans to China.

It won’t change the fact that the Trump administration still has no effective response to COVID-19, allowing states to continue to fight on their own as more a thousand Americans die each day from the disease. At this rate 300,000 Americans will die of COVID-19 this year.

It won’t change the fact that no one in their right mind sees the Trump administration’s politicized hyper-speed development of a COVID-19 vaccine as anything more than a ploy for re-election purposes.

It won’t change the fact that +30% of college football players who’ve tested positive for COVID-19 developed myocarditis which may inhibit their ability to play in college and professionally — and none of this had to happen had Trump done his job.

It won’t change the fact the Trump administration and the GOP senate are allowing children to go hungry, ignoring mounting food insecurity and growing numbers of  unemployed with 1.6 million new claims filed this week.

It won’t change the fact that evictions and foreclosures are creating another crisis surpassing that of 2007-2009.

But keep spinning, Kelly McEnany. Maybe you’ll survive the failed Trump years and earn yourself a gig spinning numbers for a TV game show as your next gig.

Wonder what the White House will do next to hide this?

Donald Trump, in a White House meeting, asked that a military parade exclude wounded veterans, because “nobody wants to see” amputees. My story here: https://t.co/4PUGrR7tCS

This is bad. I wonder if they’ll care, though, since they’ve fucked up the U.S. Postal Service so badly overseas military votes may not get counted in a timely fashion.

We should be pounding on Esper to help active duty military to vote.

Oh, not good. Media have been arguing about sourcing behind Jeffrey Goldberg’s piece in The Atlantic. AP verified some, and Washington Post followed up as well. But WaPo’s team published a piece which is just as blistering as Goldberg’s.

We still aren’t told who the sources are but my money is on Jim Mattis being one of them. Goldberg wrote a piece on Mattis in June in which Mattis took a stick to Trump.

See James Mattis Denounces President Trump, Describes Him as a Threat to the Constitution

Twitter was flooded with condemnation of Trump after yesterday’s piece in The Atlantic; Team Trump sent out a horde of proxies like Sarah Huckabee Sanders to swat it down.

Not certain who’ll believe her.

Treasury Threatens to Prosecute Reporters Trying to Reveal What Rod Rosenstein... Interpol Drops Red Notice against Yevgeniy Prigozhin Even Though US Charges...