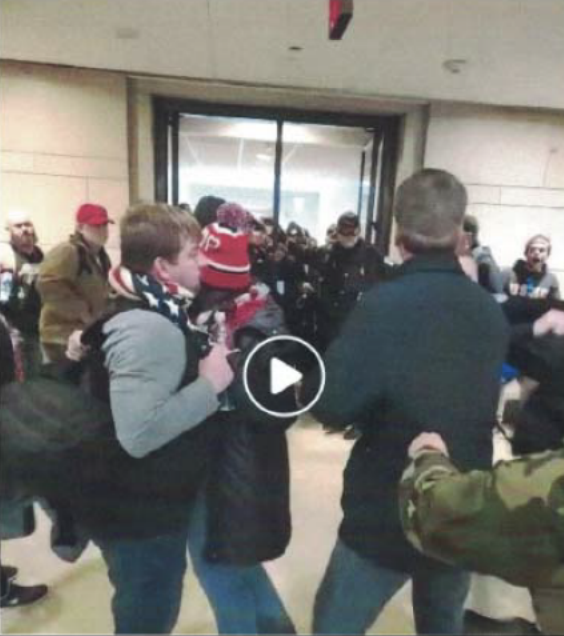 Given the focus on legal authorities used in the January 6 investigation, I wanted to look at a search warrant affidavit for the phone of Karl Dresch, a Yooper arrested on January 19 for trespassing and obstructing the vote certification. FBI obtained it Wednesday and executed it yesterday.

The investigation into Dresch arose, as most of the January 6 investigations have, when some informed the FBI — in his case, on January 7 — that Dresch had posted about busting into the Capitol on Facebook. The FBI obtained a warrant for Dresch’s Facebook content, and then, on January 19, arrested him on trespass and obstruction charges. On January 22, in part because of his Facebook posts promising “we will be back” and in part because he had a 2013 arrest and felony conviction for a high speed chase to avoid arrest in Wisconsin, he was ordered detained pending trial. Shortly thereafter, the Houghton County Sheriff, Brian McLean, who knows both Karl and his father (who helped bust the Oklahoma City bombing terrorists), told a reporter Karl should have gotten released on bail.

His father, Stephen Dresch, who died in 2006, provided the FBI information a year prior that led agents to a stash of explosives one of the Oklahoma City bombers had hidden away at his since-vacated Kansas home.

Despite the polar opposite outcomes, Houghton County Sheriff Brian J. McLean, who knows the Dresch family, called Stephen Dresch’s son “a chip off the old block.”

Stephen Dresch, whom McLean described as a “brilliant, sharp guy,” and his son were “very vocal” about their beliefs, the sheriff of 24 years said. Karl Dresch “likes to give his opinion, whether other people want to hear it or not,” he said.

Houghton County deputies have dealt with Karl Dresch on “minor nuisance calls,” but never anything serious, and he wouldn’t be on a “list of people we’re concerned about,” McLean said.

Sheriff McLean disagrees with the risk assessment. He said Karl Dresch doesn’t pose a significant risk to the public and “absolutely” should have received bond.

Since then there’s little else that has happened in this case. On February 3 he was indicted — again for the obstruction and trespassing charges, but still not an illegal possession charge tied to having two guns as a felon. On February 19, a CJA attorney filed an appearance for him. But there’s not even (in the docket) notice of his arraignment.

Now, over forty days after seizing the phone that the FBI believes he had with him on January 6, they have taken steps to access it, stating that they believe they will find evidence relating to his existing charges (trespassing and obstruction) along with unlawful possession.

Search warrant boilerplate for January 6 is slightly more comprehensive than for arrest warrants. In this case, it includes details of people calling out for Nancy Pelosi and other Members of Congress, a description of the note that Jacob Chansley left for Mike Pence in the Senate Chamber: “Justice is Coming.” It describes Eric Munchel and others wandering around with zip ties. That is, it culls the evidence from various insurrectionists that hints towards a more malign plot against Congress, without stating that explicitly. It is the story that DOJ may believe they will one day tell.

In this case, too, it includes details on the exact location and the size of the Capitol, including the Visitor’s Center.

U.S. Capitol Police (USCP), the FBI, and assisting law enforcement agencies are investigating a riot and related offenses that occurred at the United States Capitol Building, located at 1 First Street, NW, Washington, D.C., 20510 at latitude 38.88997 and longitude -77.00906 on January 6, 2021.

At the U.S. Capitol, the building itself has 540 rooms covering 175,170 square feet of ground, roughly four acres. The building is 751 feet long (roughly 228 meters) from north to south and 350 feet wide (106 meters) at its widest point. The U.S. Capitol Visitor Center is 580,000 square feet and is located underground on the east side of the Capitol.

I note the inclusion of these details because these measurements would be really useful in an affidavit that relied on details — such as the ones in Jeremy Groseclose’s arrest affidavit — that talk about the granularity of the location data the FBI is obtaining. In Groseclose’s case, a Google warrant IDed his presence in the Crypt to within 34 meters at 68% confidence. Given the size of the Capitol, then, a Google result like that would fairly clearly show the target in the Capitol, and (given a room the size of the Visitor’s Center) in the room in question.

The Visitor’s Center is one of two places inside the Capitol (the other is the Crypt) where Dresch took pictures and videos he later posted to Facebook, including this one, which court documents describe Facebook data doesn’t include the time for, but which he posted later that night.

So that may be one thing the FBI hopes to find by accessing this phone: More details about the photos Dresch took while in the Capitol. For example, there may be something on the video he took that implicates either him or others, and so want better evidence for trial.

But that’s one of the interesting absences in this affidavit. The warrant notes that Dresch used Verizon, but it doesn’t mention anything about his Verizon call records or — more especially — his location data. Presumably they have that, but have chosen not to include it.

It’s possible (indeed, the government has asserted they think they’ll find) more on the guns he has, in particular any evidence he brought them to DC either on January 6 or some follow-up trip, the one suggested by a second hotel receipt (note, in the existing affidavits, the FBI doesn’t say whom Dresch told, “we have your back give the word and we will be back even stronger,” after January 6, but Facebook surely has that).  If the FBI had reason to believe they could place someone at the Capitol with a gun, that would be an important investigative addition.

There are also his interlocutors, especially the guy, USER 2, with whom he was sharing information about what was going on in the Capitol during the event. The FBI undoubtedly knows who that is, but it’s possible FBI has reason to believe there may be more (such as deleted content) on the phone itself.

Finally, one reason the government is always going to want to exploit a phone is to obtain encrypted communications (like Signal) that wouldn’t be accessible from a provider.

None of this is at all momentous: Just an affidavit to search the phone of one presumably very minor guy, and one that can’t be all that operationally interesting (or else they would have sealed it, as virtually all search warrants currently are). Just one case among 300. At least on its face, just an effort to add another charge or learn more about other insurrectionists.

January 7: Tip that Dresch posted on Facebook about entering the Capitol.

January 19: FBI surveils Dresch’s residence and then arrests him outside it, searches his home, finding: