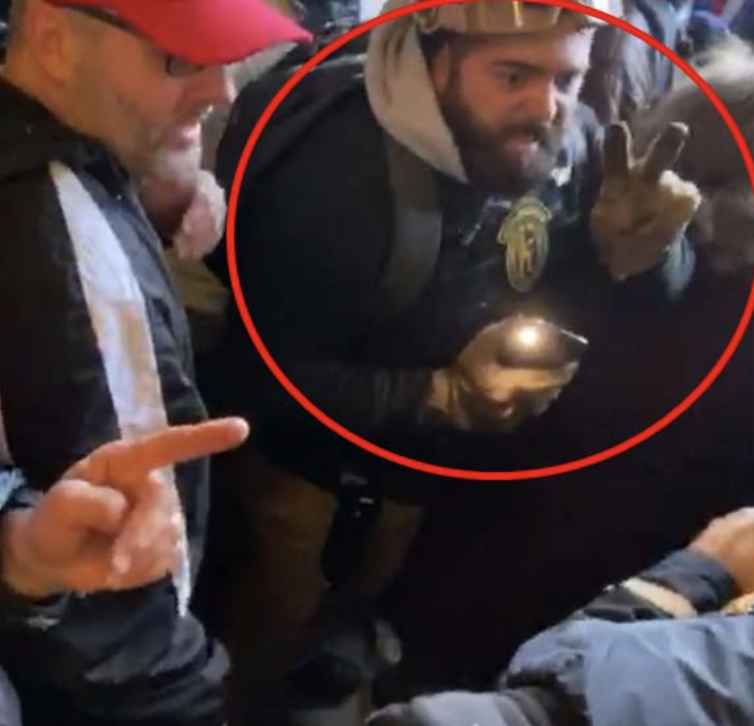 In the grand scheme of schemes leading up to the January 6 insurrection, Larry Stackhouse appears to play a minuscule role. Like over a hundred other people, according to his arrest warrant, he walked inside the Capitol and now, weeks after his colleagues reported him to the FBI, he is getting charged with misdemeanor trespassing as a result.

I’m interested in him, though, because of the evidence against him. First, there are the co-workers who, because of their obvious exhaustion with Stackhouse’s vocal support for Donald Trump, might be easy to discredit:

Unlike most referring friends, families, and disgruntled colleagues that serve as witnesses for these affidavits, W1 doesn’t claim to have seen Stackhouse post anything to social media from his trip.

The affidavit does cite social media from Stackhouse. But it’s a picture posted to Telegram from outside the Capitol, which is not a crime.

The affidavit cites “videos and images” from inside the Capitol showing Stackhouse, but the only one included is not all that clear. 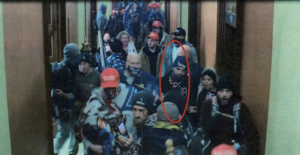 The only other piece of evidence substantiating the affidavit — the one I’m interested in — is the claim that Stackhouse’s phone was picked up on an AT&T cell site consistent with being inside the Capitol.

According to records obtained through a search warrant which was served on AT&T on January 6, 2021, in and around the time of the incident, the device associated with cellular telephone number ***-***-6199 was identified as having utilized a cell site consistent with providing service to a geographic area that includes the interior of the U.S. Capitol building.

Given the date, this must be a cell tower dump — the FBI didn’t have their first tip on Stackhouse until a month later (which would also mean the FBI obtained that dump on the day of the attack). And while the FBI uses careful language that a cell tower dump only shows what the service area includes, using it as the third data point to substantiate an otherwise thin arrest warrant suggests they’re pretty confident that it includes only the Capitol (because, again, standing outside is not a crime).

Likewise, the FBI used cell site data (this time, from Verizon) to substantiate an otherwise thin part of the affidavit against someone who does matter to grander schemes: Roberto Minuta, the Oath Keeper who went from providing “security” for Roger Stone to storming the Capitol.

There are unsurprisingly, given the focused attention to the Oath Keepers’ movements that day, more pictures of Minuta inside or existing the Capitol than of Stackhouse, tied together by the goggles Minuta wore and, in several frames, his Oath Keeper badge.

At least in what the FBI chose to reveal in this affidavit (other filings suggest they have far more collected on him and a range of his associates), the other piece of evidence included proving that Minuta entered the Capitol — rather than yelled at cops outside — is his use of a Verizon cell site consistent with being inside the Capitol.

Eventually, Minuta unlawfully breached the Capitol building itself. According to records obtained through a search warrant, which was served on Verizon, the cellphone associated with XXX-XXX-4147 was identified as having used a cell site consistent with providing service to a geographic area that includes the interior of the United States Capitol building on January 6, 2021, the day of the attack on the Capitol.

Unlike with Stackhouse, the government needs to ensure Minuta’s prosecution is water-tight, as he is a key link between the raid itself and Trump flunkies like Roger Stone, and he and several of the Oath Keeper defendants have already shown a desire to undermine the entire premise of the investigation.

As I have noted elsewhere, the granularity of the cell tower data is a critical factor in assessing the privacy impact of its use in the investigation (reiterating that reported broader cell tower dumps taken in an effort to identify the elusive pipe bomber do pose more concern). And these claims will undoubtedly be tested.

Still, the FBI seems to have confidence that these cell sites were not just serving traffic “consistent with” being inside the Capitol, but probably even “exclusive to” being inside.

Update: In an arrest affidavit for Jared Adams, arrested for trespass crimes, the FBI conveniently included a map of how the Google GeoFence works, as well as a description of how they moved from Instagram to Adams’ Google account. 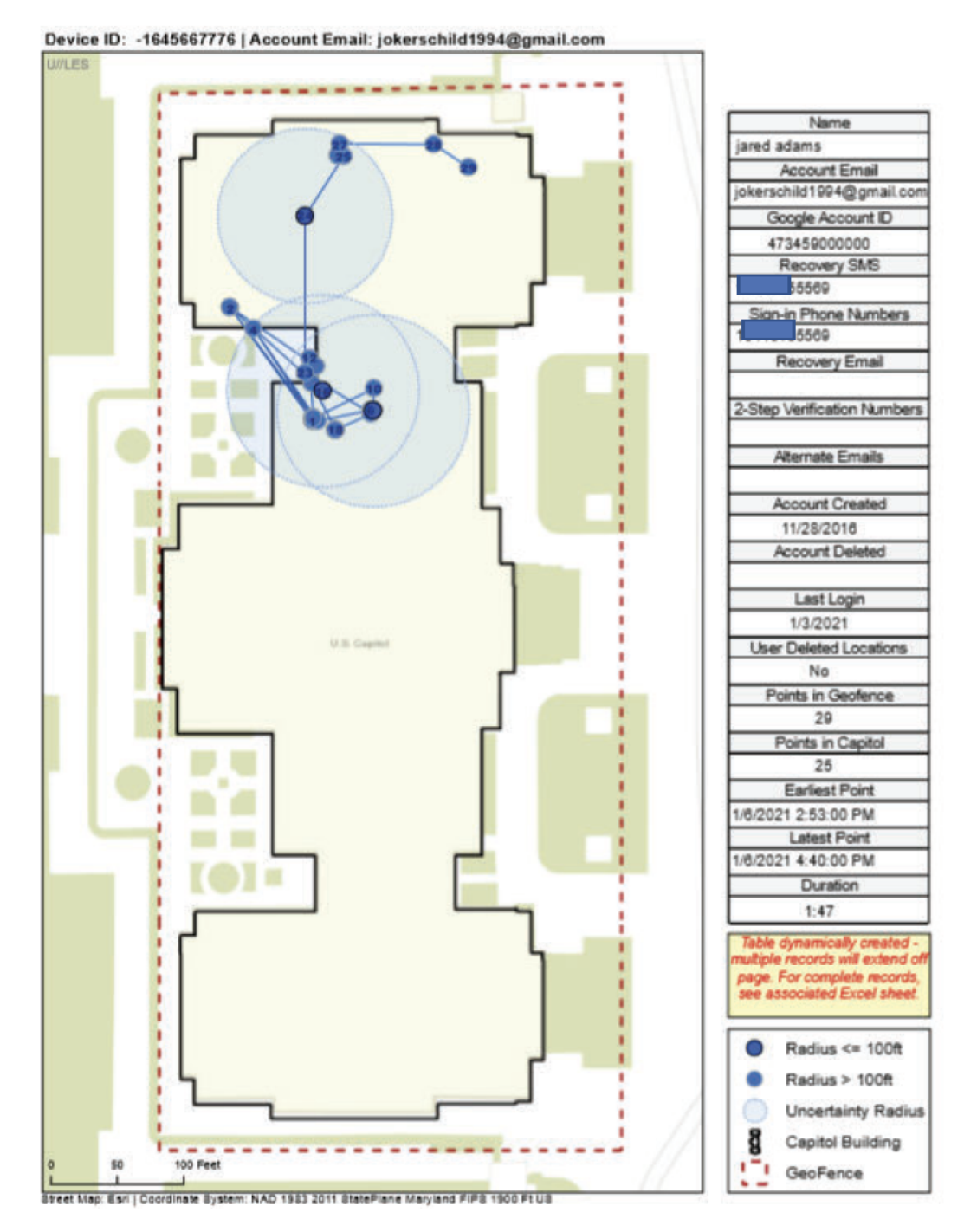 Instagram records confirmed that the Instagram account jokerschild1994 is associated with ADAMS, with an e-mail address of [email protected], and T-Mobile phone number ***-***-5569. Records provided by Facebook (username jared.adams.35325) include the same e-mail address and phone number. Records lawfully provided by Google reveal that the mobile device associated with [email protected] belonged to a Google account registered in the name of Jared Hunter ADAMS. The Google account also lists a recovery SMS phone number that matches ***-***5569, the same number as identified above. Information from law enforcement databases indicates that ADAMS lives in Plain City, Ohio. The FBI reviewed ADAMS’ application for an Ohio driver’s license, which contains the same phone number (***-***-5569)). In addition, three managers of apartment complexes where ADAMS either lived or applied for an apartment between 2017 and July 2019 also confirmed his phone number.

Then they used the Google account to geolocate Adams within the specific space of the Capitol (using, as earlier affidavits relying on Google GeoFence have, GPS, WiFi, and Bluetooth).

This reflects the same 68% confidence as an earlier use of the Geofence.

The FBI then used the GeoFence information to pull security footage showing him in the place where Google said he was. They then got his former roommate to ID him from a photo.