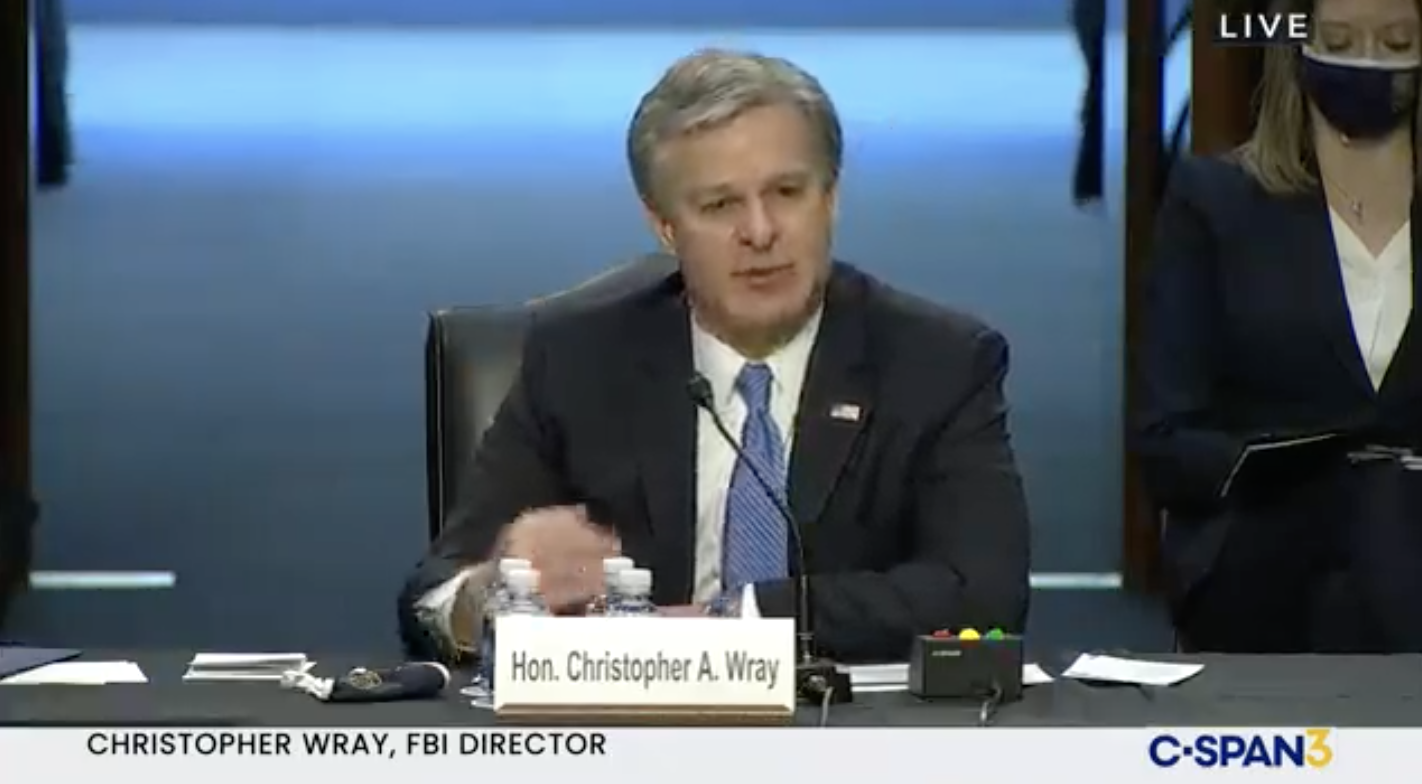 In his Senate testimony the other day, FBI Director Chris Wray was not particularly cognizant of the granular details of the investigation into January 6. But he said something else, repeatedly, that bears consideration.

In response to a Dick Durbin question about whether he agrees that the Capitol attack involved white supremacists and other violent extremists, Wray responded by explaining that as the FBI arrests more and more people, it is developing a better understanding of the motivations behind those involved in the attack.

We’re seeing quite a number, as we’re building out the cases on the individuals we’ve arrested for the violence, quite a number of what we would call militia violent extremists, so we have a number who self-identify with, you know, the Proud Boys or the Oath Keepers, things like that. We also have a couple of instances where we’ve already identified individuals involved in the criminal behavior who we would put in the racially motivated extremists who advocate for what you would call sort of white supremacy. Some of those individuals, as well — one of the things that is happening is part of this is that as we build out the cases on the individuals when we arrest them for the violence we’re getting a richer and richer understanding of different people’s motivations.

Then, in response to a Chuck Grassley question about how the FBI will learn more about alleged left wing extremists (which Wray answered for anarchists), Wray said that by arresting these people, the FBI is learning about their tactics and tradecraft.

I think as with any domestic terrorism threat or, frankly, any counterterrorism threat more broadly, we’re also looking to develop more and better sources so we get more visibility and insight into the plans and intentions, tactic, tactics, procedures of any group of violent extremists. Another is to get better at how to navigate around some of the operational trade craft that they use. So, the more times, the more arrests we see and this is relevant both for the anarchist violent extremists and the racially motivated violent extremists, for example, the more arrests you see, that’s obviously good news that we’re arresting people that need to be arrested. There’s a whole ‘nother part of that is really important. The more arrests we make, the more from those cases we learn about who else their contacts are, what their tactics are, what their strategies are, et cetera. And that makes us smarter, better able to get in front of the threat going forward.

Finally, when Amy Klobuchar asked if the attack was planned and coordinated, Wray first responded that there were aspects that had been planned. Then, in response to a specific question about the Proud Boys’ coordination, Wray explained that the FBI is escalating charges after initial arrests based on what they learn subsequent to the initial arrest.

There have been a growing number of charges as we continue to build out the investigation, either individuals who are now starting to get arrested involving charges that involve more things like planning and coordination or in some instances individuals who were charged with more simple offenses, but now we’re superseding as we build out more of an understanding of what people were involved in. And there were clearly some individuals involved, which I would consider the most dangerous, the most serious cases among the group, who did have plans and intentions and some level of coordination.

None of this is surprising. It has been apparent from the court filings in the investigation.

But the significance of it is worth considering. The FBI blew it in advance of the attack for reasons that have yet to be confirmed but at least seem to arise from an unwillingness to see right wing terrorism being planned in plain sight. But, as I’ve repeatedly said, the nature of the attack is such that every single person who entered the Capitol and many of those who remained outside, physically fighting cops, committed a crime. And so, based on those trespass crimes, the FBI is arresting a lot of people. Because that’s the way the investigation has rolled out — and because, for every single trespass defendant, the record of what they said about their actions in advance make the difference between getting charged for obstructing the vote count or not — it means the FBI arrests people before they’ve done a lot of investigation they otherwise might do before an arrest. For better and worse, that means that the FBI is arresting people and then conducting intrusive collection on them, starting with their cell phone, even for people who seem to be just trespass defendants. That further means that the FBI will get access to communications that will support conspiracy charges when they otherwise would have a difficult time making such charges without a domestic terrorism statute.

There are real problems with this approach — Oath Keeper affiliate Jon Ryan Schaffer moved to dismiss the charges against him because DOJ has left him in an Indiana jail for 48 days without obtaining an indictment. For existing networks that aren’t recognizably a militia, I’m fairly certain the FBI is not seeing associations until after initial detention bids have been lost. Prosecutors have had to backtrack on claims with some notable defendants (such as Ethan Nordean, who got sent released to home confinement as a result).

But it means the FBI will obtain a far more detailed understanding of some of these people than they otherwise would have been able to get. And as it does so, it is seeing the networks of conspiracy that they otherwise might not have.