TL;DNR = Too Late; Do Not Resuscitate

A friend sent me this tweet with an embedded TikTok clip late Friday night:

Yes, Idaho’s Department of Health and Welfare declared it was activating Crisis Standards of Care (CSC) effective September 6; the standard was reiterated on September 16. The “Universal DNR” referred to in the TikTok is on page 9 of the IDHW’s document, Patient Care Strategies for Scarce Resource Situations for use under CSC conditions.

Idaho has simply run out of ICU beds, ventilators, and personnel to support persons who either code in the hospital or arrive at the hospital in need of resuscitation.

Technically speaking, the guideline isn’t universal across all of Idaho; the IDHW noted in its September 16 statement,

… Although DHW has activated CSC, hospitals will implement as needed and according to their own CSC policies. However, not all hospitals will move to that standard of care. If they are managing under their current circumstances, they can continue to do so. …

But chances are good if the ICU beds are full in any Idaho hospital, patients are being transferred to other hospitals until their beds are full as well.

None of this had to happen.

In fact, this change in triage methodology could have been foreseen.

Last March we saw the first documented and publicly acknowledged “codice nero” conditions in northern Italy and then in Detroit, when hospitals were completely overwhelmed by the first surge of COVID-19 patients. While Italians may not have known about the implementation of code black, Detroit’s local news reported on the change in triage protocols after patients and their families were notified on admission that care would be allocated in order of patients’ likelihood of survival due to the limited resources available, from ICU beds to ventilators to qualified health care staff.

The swamping of hospitals in March 2020 could have been avoided had lock-downs and mask mandates been implemented by the end of February/first week of March, but there likely would have been a surge in hospitalizations simply because government and public alike still had not fully acknowledged the threat COVID-19 posed.

Idaho’s hospitals have been and are among the worst in the nation for crisis care preparedness. As of the third week of August, Idaho was number three behind Georgia and Texas among states that are least prepared for hospital capacity. At that time Idaho’s ICU beds were already 83% occupied.

The state had ample to adjust to a pandemic and prepare for the possibility of a surge in COVID-19 cases. They had plenty of examples of crisis level care across the country to shape their response.

But now, nineteen months after the first wave began, when multiple vaccines are freely available to the public? The ICU beds are beyond full if Idaho must declare the equivalent of a code black.

Unvaccinated Idahoans chose this. They willfully opted to court hospitalization, long-term disability, and death by COVID-19.

The worst part is what the unvaccinated are doing to those who chose otherwise — like those who arrive at the hospital with a gunshot wound or a heart attack or stroke, who may have been vaccinated but are likely to die because they will only receive palliative care instead of interventions to save their lives.

To make it easier for folks who don’t want to open the IDHW’s document, Patient Care Strategies for Scarce Resource Situations for use under CSC conditions to read page 9, here’s a snapshot: 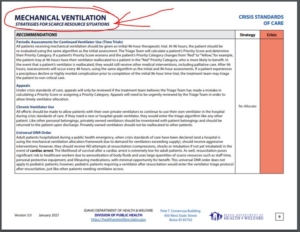 Note there is zero reference to COVID-19 on the entire page and the “Universal DNR Order” refers to all patients in cardiac arrest.