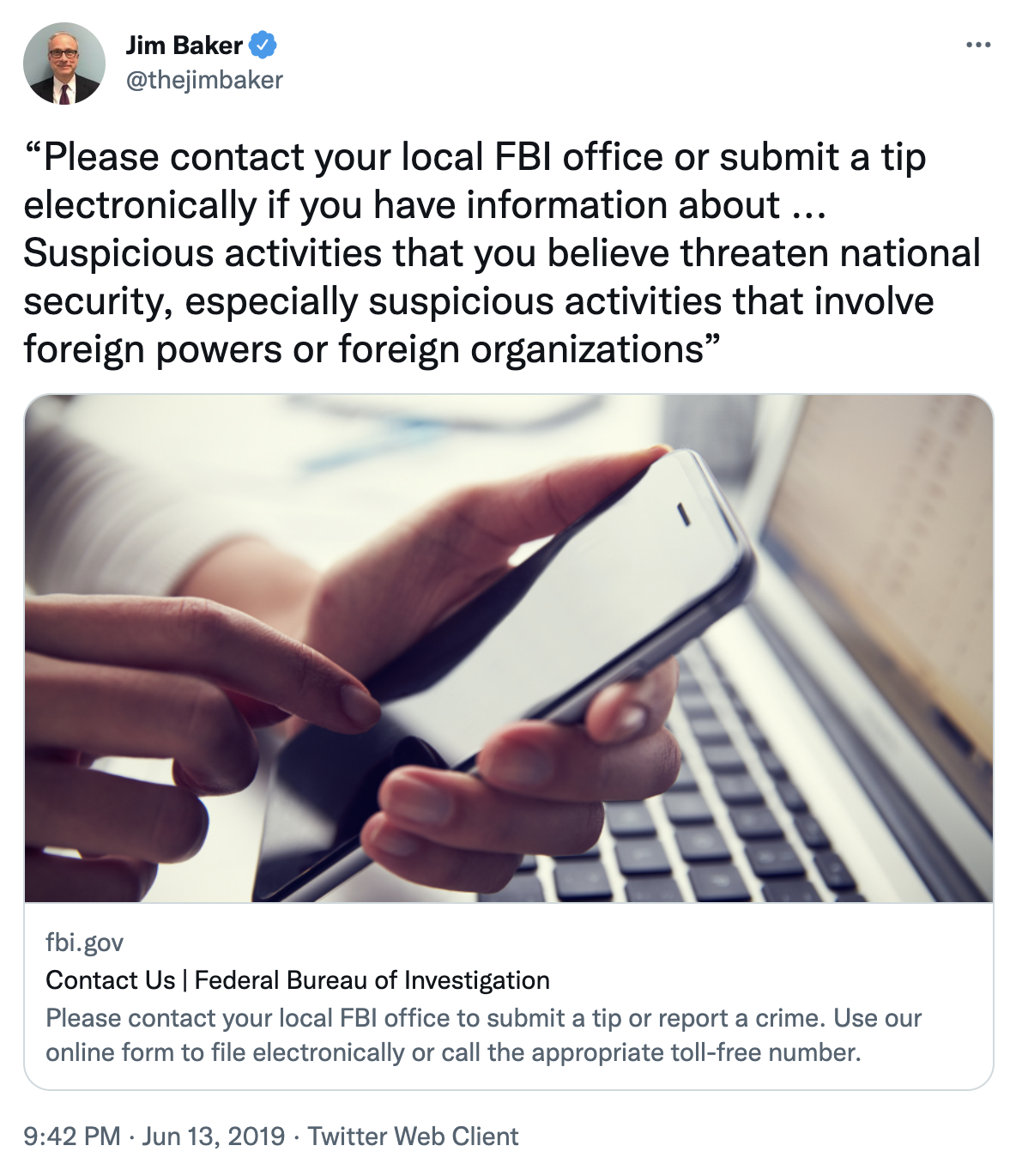 In my post on what prosecutors need to prove to win their case against Michael Sussmann, I noted they had to prove that:

I think the government has, in some ways, done best presenting their materiality arguments (but then, that’s the lowest bar). But even there, exhibits submitted at trial show that at least two of the key decision-makers on investigative issues had received a text referencing that this was a DNC report; Andrew DeFilippis speculated with one of the witnesses who received the text that it was a typo for DNS. And it appears, in multiple situations, people just assumed that Sussmann was at the FBI on behalf of the Hillary campaign, and took it into account. That said, Berkowitz got Baker — who was a key player in the Stellar Wind story that Eric Lichtblau held through an election in 2004 — to explain how important, from a national security perspective, it can be to hold certain stories.

And as I’ll show, Sussmann’s team may have something very special in store to make their materiality argument.

Regarding whether his statement that he was not there “on behalf of any client,” I think Sussmann has made a very good case that he meant his comment to Jim Baker on September 18 that he wanted to help the FBI. Both Marc Elias and Robbie Mook testified that sharing advance warning of a story they wanted to come out was the last they would have wanted or approved, because Jim Comey had done so much to damage the campaign. Particularly if Eric Lichtblau testifies, Sussmann will have a powerful story about all the damage that going to the FBI did to the campaign.

As to the other questions, they all go to Baker’s credibility on the stand.

I can’t say how the jury reacted, but I think prosecutors really didn’t do what they needed to do to prove that Sussmann repeated his comment about not meeting with Baker on behalf of any client and, then, hiding it when he helped the FBI kill the story later in the week. And Berkowitz did even more to show the changing nature of Baker’s statements about the meeting over time.

Those threads were hard to write and I’m sure even more painful for people who are friends of one or both men to read. The story Berkowitz told was how, through the relentless grind of Republican blowhards and the Trump DOJ’s politicized investigations, Baker came to “remember” testimony that could put his friend, Sussmann, someone who had tried to get him a job when he was at a really bad point in his life, in prison.

I suspect it likely that Sussmann’s team will point out that Durham is choosing to prosecute just the people whose story doesn’t match the one that Durham wants to tell. It’s not just Baker whose testimony to Durham is inconsistent with provable facts, but Durham is not prosecuting any of the witnesses who are saying what he wants them to.

With all that as background I want to point to something subtle that I suspect will become part of that theme. Ostensibly to address materiality — Baker’s belief, one he shared with Congress in 2018 but contradicted under coaching by Durham on the stand — that if you have a national security tip you need to feel free to come to the FBI. Baker tweeted it out on June 13, 2019. 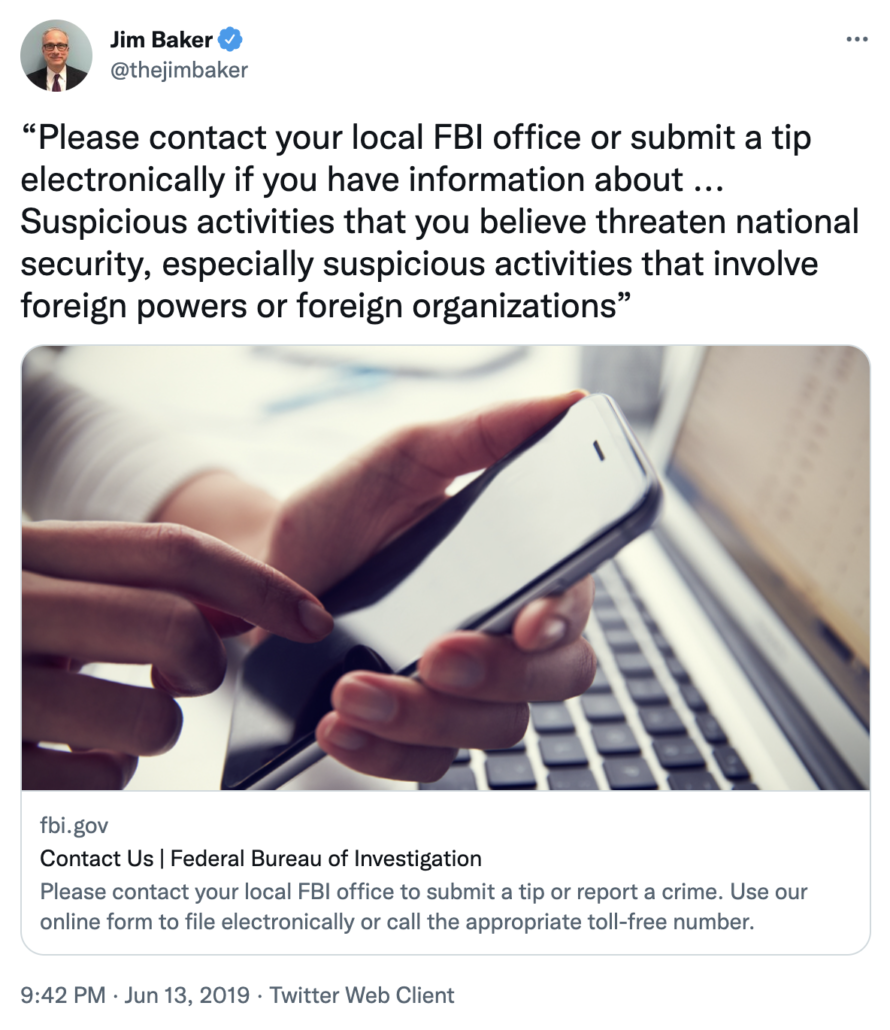 This would have been posted weeks after Durham was appointed, which — Baker testified — led Baker to expect he’d be under criminal investigation again.

Q. And you, sir, were aware that Mr. Baker was — I mean, Mr. Durham was reappointed as special counsel, correct, in or around 2019?

A. For this matter?

Q. And when that happened, you were concerned, were you not?

A. Concerned about what?

Q. That Mr. Durham might come and investigate you more?

A. I wasn’t concerned about it. I expected it.

Q. All right. You expected to be investigated further by Mr. Durham. Correct?

After having laid out how Baker had been investigated by Durham as part of a leak investigation for years, Berkowitz even introduced a text that Baker sent Ben Wittes the day after Durham was appointed saying, “now I get to be investigated for another year or two by John Durham. Lovely.”

But the tweet about going to the FBI wasn’t about Durham and it wasn’t random.

Rather, it was a response to something Trump said in an interview with George Stephanopoulos, between the time Mueller wrapped up his investigation, in part, of Trump’s request, “Russia, are you listening,” in 2016 and the time Trump asked Volodymyr Zelensky, “but first, I would like you to do us a favor.” On the same day Baker encouraged people to go to the FBI if they had evidence, ABC posted an interview in which Trump said,

“It’s not an interference, they have information — I think I’d take it,” Trump said. “If I thought there was something wrong, I’d go maybe to the FBI — if I thought there was something wrong. But when somebody comes up with oppo research, right, they come up with oppo research, ‘oh let’s call the FBI.’ The FBI doesn’t have enough agents to take care of it. When you go and talk, honestly, to congressman, they all do it, they always have, and that’s the way it is. It’s called oppo research.”

I’m not precisely sure how Sussmann’s team is going to use this tweet, beyond the materiality question, materiality about precisely this situation, whether someone should share information with the FBI after their opponent solicited help from a hostile foreign government.

But it sure seems to be evidence of more than just materiality.

The Methodology of Andrew DeFilippis’ Elaborate Plot to Break Judge Cooper’s... That Clinton Tweet Could Lead To a Mistrial (or Reversal on Appeal)