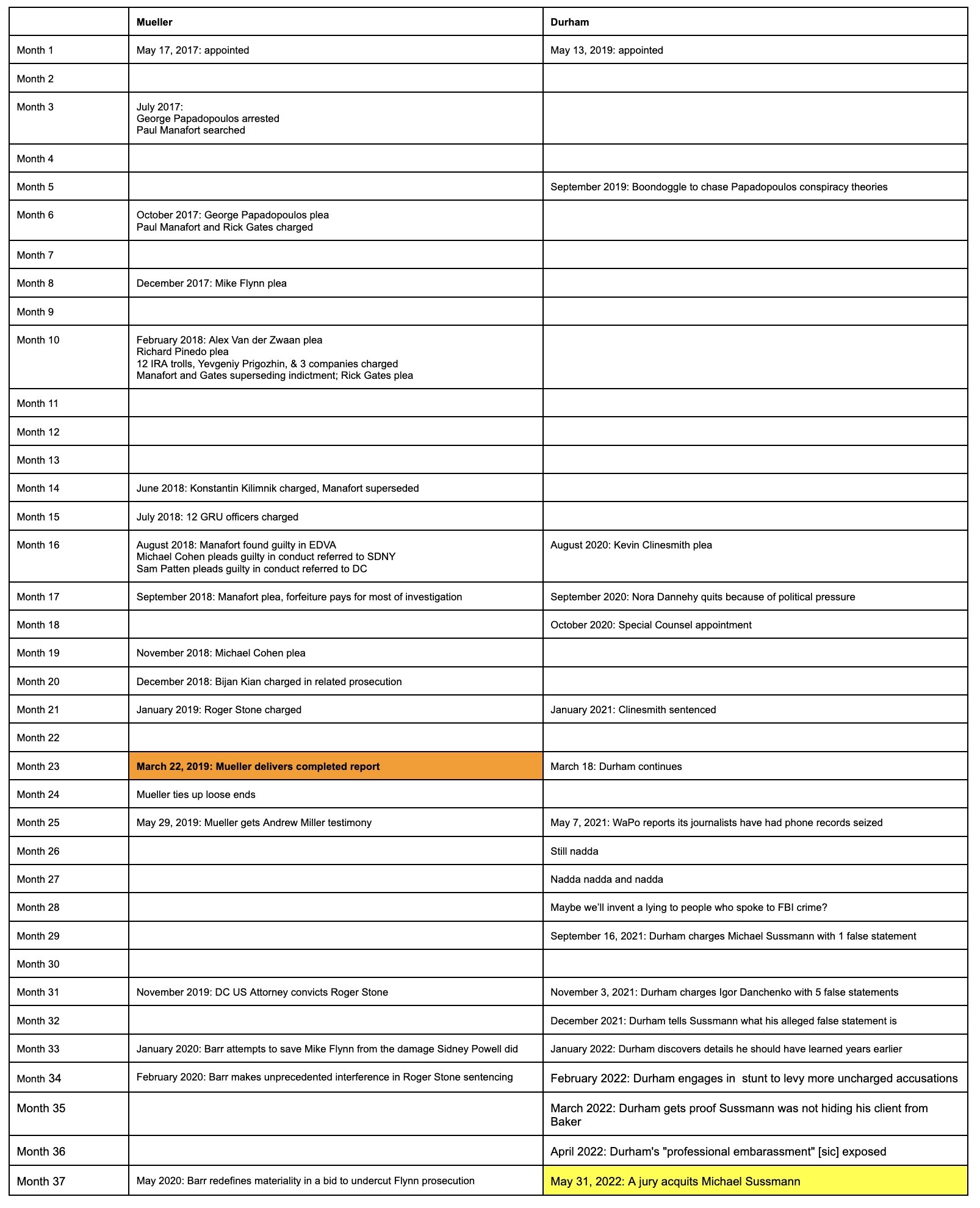 Michael Sussmann was acquitted of lying to the FBI.

The jury deliberated for six hours. This morning, they asked for exhibits that include the taxi receipts showing that Sussmann did not bill the Hillary campaign for the meeting with the FBI. They also asked whether they all had to agree on the elements of the offense, suggesting some people believed Durham had not proven some aspects (such that Sussmann had lied or that he did so intentionally) whereas others believed Durham had not proven other parts (such as that it was material — remember that FBI largely proceeded as if this were a tip from the Hillary campaign).

While we are disappointed in the outcome, we respect the jury’s decision and thank them for their service. I also want to recognize and thank the investigators and the prosecution team for their dedicated efforts in seeking truth and justice in this case.

I have a few thoughts to share, now that trial has ended.

First, I told the truth to the FBI, and the jury clearly recognized that with their unanimous verdict today.

I am grateful to the members of the jury for their careful and thoughtful service. Despite being falsely accused, I am relieved that justice ultimately prevailed in this case.

As you can imagine, this has been a difficult year for my family and me. But right now, we are grateful for the love and support of so many during this ordeal, and I’m looking forward to getting back to the work that I love.

Finally, I want to thank my legal team at Latham & Watkins—Sean Berkowitz, Michael Bosworth, Natalie Rao, & Catherine Yao. They are the finest lawyers, and they worked tirelessly on my case.

The statement from his attorney, Sean Berkowitz, is more interesting.

We have always known that Michael Sussmann is innocent and we are grateful that the members of the jury have now come to the same conclusion.

But Michael Sussmann should never have been charged in the first place. This is a case of extraordinary prosecutorial overreach. And we believe that today’s verdict sends an unmistakable message to anyone who cares to listen: politics is no substitute for evidence, and politics has no place in our system of justice. 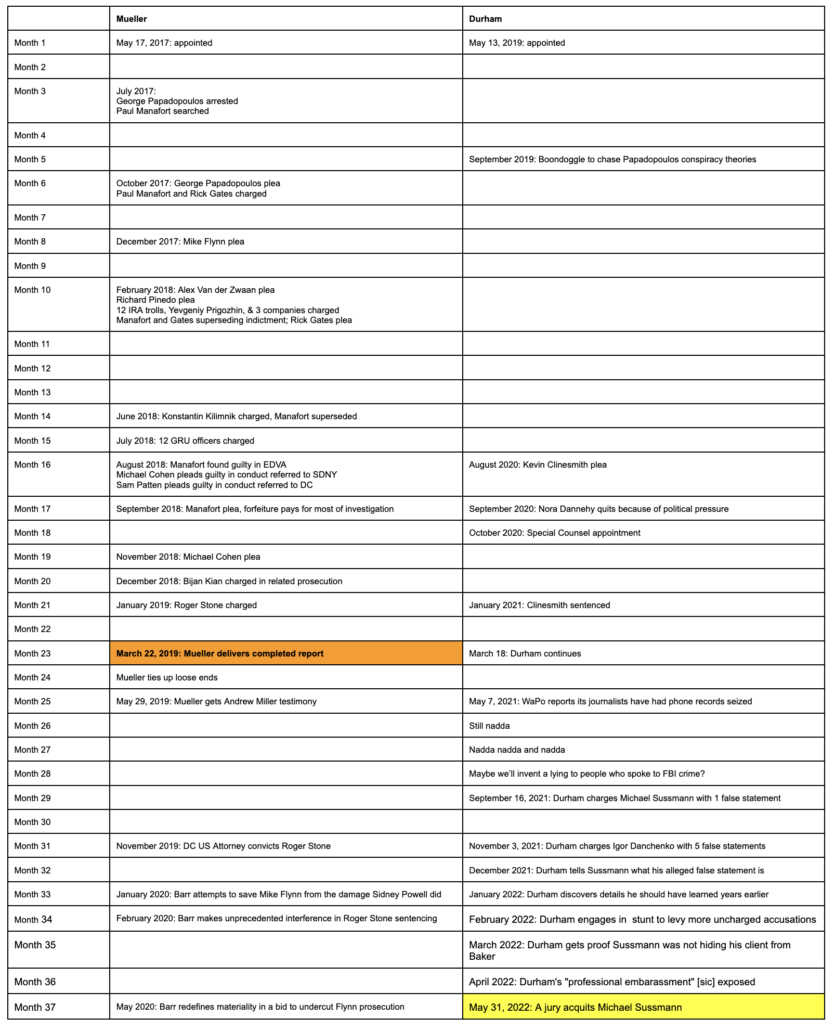 Update: Here’s what happened with the jury’s two questions from the end of the day on Friday.

The jury is present and deliberating. We received two notes at the very end of the day on Friday, which I will read for the record. Two questions in the same note.

The first question: “To deliver a verdict does the jury need to have consensus on each element (the 5 elements of offense) or just consensus on the verdict?”

And then second, they say they seem to be missing two government exhibits, 306 and 403.

So as to the first question, the Court has printed out a proposed response as follows:

I think that directly answers the jury’s questions, unless there are any comments or suggestions.

MR. BERKOWITZ: No comments from us. I think that’s correct, Your Honor.

MR. DeFILIPPIS: No, Your Honor.

THE COURT: All right. So we will send that back. Our records do not have Government Exhibits 306 or 403 even being referenced, let alone admitted. Do you folks have a different recollection of that?

MR. DeFILIPPIS: Your Honor, we don’t have a different record. That’s, I think, our record as well.

MR. BERKOWITZ: I think one of the exhibits is also a defense exhibit, 436. I don’t know if they have that one, but I’m assuming they have them available, if they’re in evidence.

THE COURT: Okay. We will just let them know that those exhibits are not admitted into evidence.

MR. DeFILIPPIS: No objection, Your Honor.

THE COURT: Okay. (Discussion off the record)

THE COURT: Okay. Well, we’ll just leave it at 436 and not comment on the other one.

Update: Corrected table — I’ve lost track of the end of May.

“The Bell Can Never Be Unrung” … The Many Times Durham’s... FBI’s Russian Hack-and-Leak Investigation as Disclosed by the Sussmann...