As I have noted previously, Congress requires the Defense Department to provide status reports on the situation in Afghanistan twice a year. The scheduling of these reports appears to be entirely random. The first report in 2012 was in April, but since there was an election in the US in November, it appears that the Defense Department and the Obama administration managed to delay the next report for several months, so that it was published in December instead of October. The next report in this series has now been released (pdf), about seven and a half months after the December 2012 report was released. So much for that “semi-annual” requirement from Congress. The next interval will have to be significantly shorter than six months if there are to be two reports in 2013.

I am still taken aback each time I open one of these reports, since the title is always “Progress Toward Security and Stability in Afghanistan”. Aside from the fact that even with Afghans self-reporting their own troop strength, the Defense Department can only report an overall ANSF force size of 333,368 as of January, 2013, well short of the fabled 352,000 overall ANSF force size that the Obama administration and media spout regularly. But the abject failure displayed in how these Afghan troops have been deployed as they take over primary responsibility for security in the country is staggering.

We have heard anecdotal reports in the media for some time now about how individual bases and small outposts in Afghanistan have been abandoned during the process of handing over security responsibility. One figure in the Defense Department report, however, drives home just how widespread the process of abandoning facilities has become: 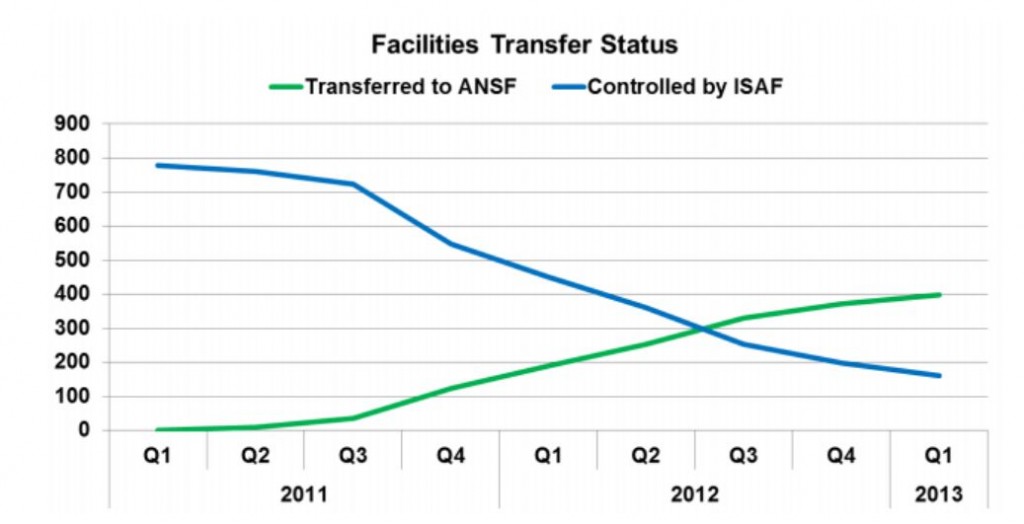 Many bases are being abandoned in Afghanistan as Afghans take over primary security responsibility.

Note that ISAF starts off with more or less 800 facilities at the beginning of 2011. At the end of the graph, ISAF appears to be in charge of only about 175 facilities and yet the ANSF has only taken over 400 facilities. That leaves between 200 and 225 facilities abandoned, presumably because the ANSF cannot defend them. In other words, of the over 600 facilities ISAF has withdrawn from, less than two thirds of them can be defended or maintained by Afghan forces.

And keep in mind that this is not a problem of number of personnel. In fact, ANSF force size, at least as reported by Afghanistan and ISAF, is more than twice the troop size ISAF has ever had in-country: 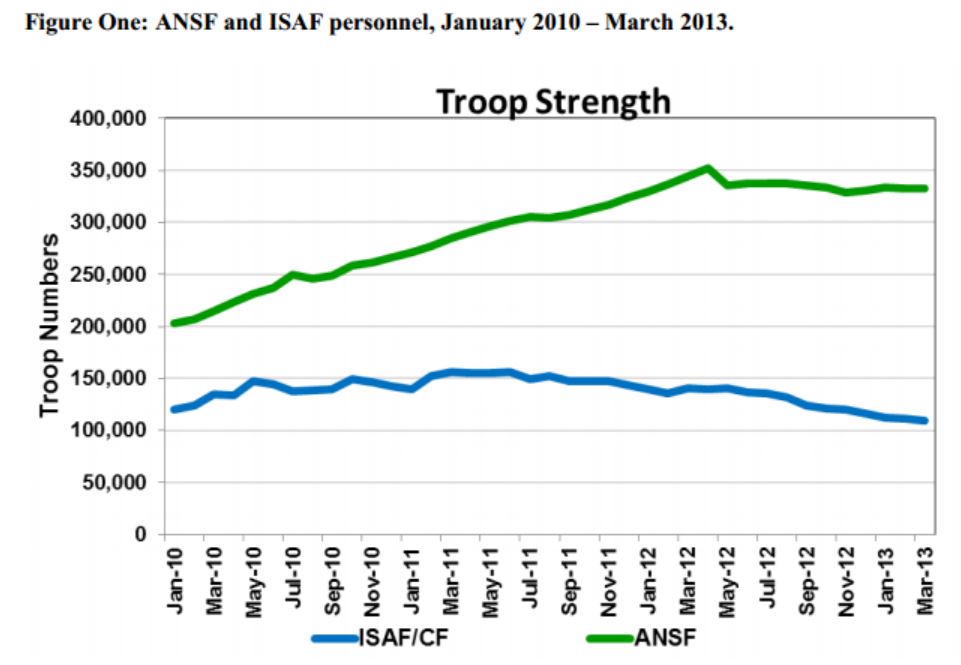 Afghanistan has more than twice as many troops as ISAF, and yet it can maintain only about two thirds of the facilities that ISAF is exiting.

How can the Defense Department continue to claim “progress” in Afghanistan when the large force it has trained is not capable of maintaining ISAF-established facilities with more than twice as many troops? And with the number of bases going down by at least a third, how can Afghanistan be expected to provide anything near the level of security that ISAF provided?

Here is the text that was provided with the figure where it is clear that many bases are disappearing:

Yup, abandoning over 200 bases would indeed qualify as “not all” of those ISAF has exited being transferred to ANSF control.

Postscript: I chose a really bad time to take a few days off. While I was gone, this Defense Department report, the latest SIGAR quarterly report on Afghanistan and the latest UNAMA report on civilian casualties all came out. I will try to dig through this report more thoroughly as well as the other reports over the next few days.