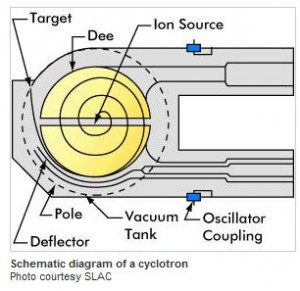 In a cyclotron, the magnetic "dees" accelerate ions to very high speeds in an outwardly spiraling path before they hit the target. (Diagram from the SLAC National Accelerator Laboratory)

Radioactive sodium-22 has been found in a bag checked at Moscow’s Sheremetyevo airport that was headed for Tehran. The earliest reports on this finding were quite misleading, as the initial statement from Russia indicated that the material “could only have been obtained as the result of the work of a nuclear reactor“.

The problem with the Russian statement is that sodium-22 is in fact produced in a device called a cyclotron and not in the type of nuclear reactor containing uranium that most folks think of when they hear that term. Cyclotrons work by using very strong magnetic fields to accelerate ions (atoms stripped of one or more electrons so that they have an electric charge) to very high speeds before they are slammed into a target. The name “cyclotron” derives from the fact that the path traveled by the ions is circular (more accurately spiral).  In the case of sodium-22, the ions are deuterons. Deuterons are ions of heavy hydrogen, known as deuterium, which contain one proton and one neutron (and thus have a net charge of plus one), rather than just the solitary proton found in normal hydrogen.  When deuterons are accelerated to very high speeds and then made to slam into a target of magnesium, the normal magnesium-24 atoms absorb a deuteron and then quickly eject an alpha particle (a helium nucleus with two protons and two neutrons), turning into sodium-22.

Sodium-22 emits both a positron (this is the antimatter form of an electron, or an electron with a positive rather than a negative charge) and high energy gamma ray (like an X-ray), with a half-life of 2.6 years. It can be used in biological experiments as a “tracer”, buts its most common use in medical technology appears to be for calibration of an instrument known as a gamma probe.

The earliest reports on this story only included the Russian statement that the radioactive material only could have come from a nuclear reactor, but later reports are clearing up parts of the misleading nature of that statement. For example, at the time of this writing, the Reuters story, which has been evolving rapidly, characterizes sodium-22 as “an isotope that is used in medical equipment but has no weapons use”. Further, the story says:

Sodium-22 can be used for calibrating nuclear detectors and in medical equipment, nuclear experts said.

“There is no weapons aspect to this (material),” said Research director Lars-Erik De Geer of the Swedish Defense Research Institute.

It is not clear at all why Iran would need sodium-22 from an outside source, since Iran has registered a cyclotron with the IAEA (pdf, see page 167) that is stated to be used in the production of medical-related isotopes and is capable of producing high energy deuterons. Since Iran does have over 100 nuclear medicine departments, it would be reasonable to expect that there is demand for sodium-22 in calibration of equipment.

The sodium-22 in the luggage was in steel containers:

It is also not clear why this material would be shipped in airline baggage rather than through normal medical/industrial channels. Since sodium-22 is not used in weapons work, it would seem that there would be no prohibition on its importation into Iran. Reuters notes that the passenger shipping the luggage was an Iranian national and left Russia, presumably on the flight for which the bag was checked.  Russia has started a criminal investigation.

Update:  Here is Iran’s side of the story, from Mehr News:

Iranian ambassador to Moscow has said that Russian customs officers’ decision to temporarily hold an Iranian dental student at one of Moscow’s main airports was the result of a misunderstanding.

According to Reuters, Russia’s customs service said on Friday it had seized radioactive sodium-22, an isotope that is used in medical equipment but has no weapons use, from the luggage of an Iranian passenger planning to fly from Moscow to Tehran.

The material triggered an alarm in the airport’s radiation control system and a luggage search led to the discovery of 18 pieces of the radioactive metal packed in individual steel casings, the report claimed.

“Over a month ago, a dental student in Moscow, (before) flying to Iran, was (found) in possession of a material related to his work, which caused a misunderstanding for customs officials. Later, it turned out that it was not a special case, and the student continued his trip,” Ambassador Reza Sajjadi said.