As a number of people have observed, in last night’s debate, Donald Trump not only refused to condemn white supremacist terrorists, but seemed to call on them to stand by to support him.

President Donald J. Trump: (42:18)
Proud Boys, stand back and stand by. But I’ll tell you what somebody’s got to do something about Antifa and the left because this is not a right wing problem this is a left wing.

He named the Proud Boys explicitly.

Today, I noted that the reason why Randy Credico took Roger Stone’s threats seriously — the reason the witness tampering charge merited the full enhancement — was because of Stone’s ties to the Proud Boys. Credico confirmed that by posting a picture of Stone with his gang. 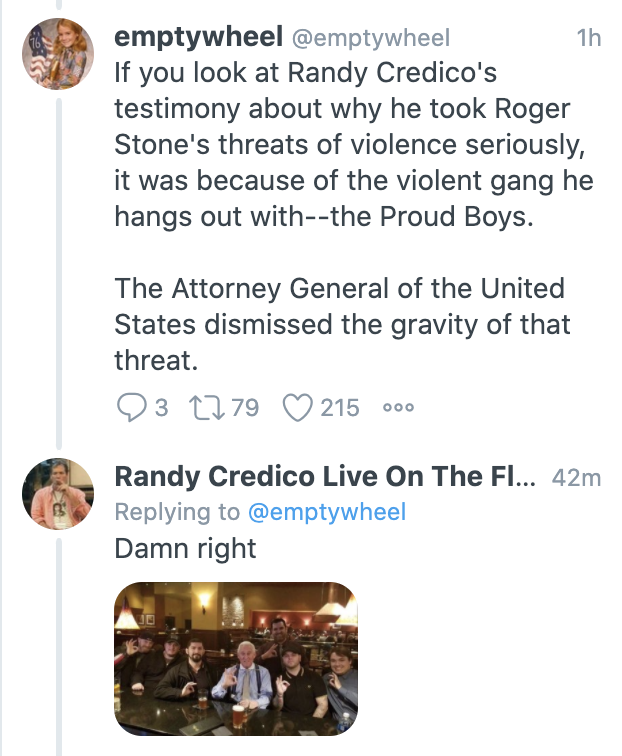 It’s not just Credico. When ABJ held a hearing to consider a gag on Roger Stone, she first got him to explain how his associates — whom he first declined to identify but then, when pressed by prosecutor Jonathan Kravis, named Proud Boys members Jacob Engles and Enrique Tarrio — had been working with him on that post but he couldn’t really describe who had picked the image of Judge Jackson with the crosshairs on it.

Amy Berman Jackson. How was the image conveyed to you by the person who selected it?

Stone. It was emailed to me or text-messaged to me. I’m not certain.

Q. Who sent the email?

A. I would have to go back and look. I don’t recognize. I don’t know. Somebody else uses my —

THE COURT: How big is your staff, Mr. Stone?

THE DEFENDANT: I don’t have a staff, Your Honor. I have a few volunteers. I also — others use my phone, so I’m not the only one texting, because it is my account and, therefore, it’s registered to me. So I’m uncertain how I got the image. I think it is conceivable that it was selected on my phone. I believe that is the case, but I’m uncertain.

THE COURT: So individuals, whom you cannot identify, provide you with material to be posted on your personal Instagram account and you post it, even if you don’t know who it came from?

THE DEFENDANT: Everybody who works for me is a volunteer. My phone is used by numerous people because it can only be posted to the person to whom it is registered.

Jonathan Kravis. What are the names of the five or six volunteers that you’re referring to?

Stone. I would — Jacob Engles, Enrique Tarrio. I would have to go back and look

When she imposed a gag on Stone, she explained that his Instagram post amounted to incitement of others, people with extreme views and violent inclinations.

What concerns me is the fact that he chose to use his public platform, and chose to express himself in a manner that can incite others who may feel less constrained. The approach he chose posed a very real risk that others with extreme views and violent inclinations would be inflamed.

The defendant himself told me he had more than one to choose from. And so what he chose, particularly when paired with the sorts of incendiary comments included in the text, the comments that not only can lead to disrespect for the judiciary, but threats on the judiciary, the post had a more sinister message. As a man who, according to his own account, has made communication his forté, his raison d’être, his life’s work, Roger Stone fully understands the power of words and the power of symbols. And there’s nothing ambiguous about crosshairs.

Then, again at the sentencing hearing, ABJ talked about the risk that, “someone else, with even poorer judgment than he has, would act on his behalf.

Both Credico and ABJ, then, pointed to the white supremacist gang that Roger Stone hangs out with to explain why Roger Stone’s threats must be taken seriously.

And Bill Barr dismissed the seriousness of both those threats — the threats Roger Stone makes that might lead one of his associates to take violent action — when he undermined the sentencing recommendation on Stone.

Trump’s invocation of the Proud Boys is no idle threat. Because the Proud Boys have already been used to intimidate those holding Donald Trump accountable.