If I had my way, President Obama would defend his investments in alternative energy by saying something like this:

In 1945, a great Democratic President sealed an alliance with our Saudi allies that cemented our energy security for the next half a century. While our commitment to the Saudis has come with setbacks over the years, it nevertheless provided the foundation for unprecedented American power and strength.

It’s in the same spirit of proactively ensuring America’s future greatness that my Administration set out to–and succeeded–in doubling our production of alternative energy. My Republican opponents, however, have sought to turn efforts to ensure America’s future greatness into a petty political issue. Doing so risks leaving America unprepared to compete in the future.

Never mind the problems FDR’s commitment to oil in 1945 brought about. Never mind overselling the importance of his 1945 meeting. Both are details Republicans will never point out.

More importantly, by posing Republican opposition to alternative energy as a refusal to take care of America’s future, it would turn GOP favoritism for oil into a national security weakness. As it really is.

But Obama won’t say that (or at least he hasn’t yet, and he’s had over a year of Solyndra attacks in which to do so).

So I hope when Mitt brings up the A123 bankruptcy tonight, Obama is at least prepared to call it what it is: capitalist consolidation just like the kind that Mitt has built his quarter billion fortune on. And this one is probably a net win for the US all around.

A123, one of the more innovative battery companies, announced this morning that it will file for bankruptcy. Mitt is likely to bring it up because A123 received energy stimulus funds for battery plants in MI.

But not only is A123 in negotiations to sell the rest of its business areas, it has already announced Johnson Controls (disclosure: I own stock) will purchase it auto related holdings–the stuff that benefitted from stimulus dollars.

A123 this morning said that it has agreed to sell its automotive business assets, including facilities in Livonia and Romulus, Michigan, its manufacturing facilities in China and its stake in the joint venture Shanghai Advanced Traction Battery Systems Co., to Johnson Controls for $125 million.

A123 said it “continues to engage in active discussions regarding strategic alternatives for its grid, commercial, government and other operations, and has received several indications of interest for these businesses.”

Say what you will about diminishing competition in a field where competition really serves innovation. But as far as stimulus dollars goes, this represents a consolidation. JCI–which received multiple energy grants itself, including for a battery factory in Holland, MI–has gotten expanded facilites at a discount. It will also benefit from the money the Chinese have invested in A123.

One more neat part to this: JCI is headquartered in Milwaukee, WI. They’re not in Paul Ryan’s district, but they do bleed into his WI ideological home, Waukesha. So when Mitt attacks the A123 investment, he will ultimately be attacking his running mate’s neighborhood.

It’s likely Mitt will bring up the A123 bankruptcy tonight. If he does, I hope Obama is prepared to use it to flip GOP attacks back on Mitt.

Update: The Department of Energy is talking about consolidation too.

In an emerging industry, it’s very common to see some firms consolidate with others as the industry grows and matures. END_OF_DOCUMENT_TOKEN_TO_BE_REPLACED 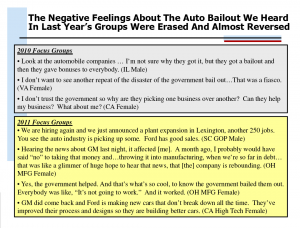