Since it’s fashionable to debate whether the FISA Court is a rubber stamp or not, I wanted to point to this document, released to EFF under FOIA yesterday. Is is an August 7, 2006 order from Colleen Kollar-Kotelly for additional briefing on whether the government can retain the Post Cut Through Dialed Digits collected as part of a pen register. In this release, the government has redacted the date. We know the date — and the general circumstances of the request — from documents released in 2014 and another earlier EFF FOIA. I covered it here.

During this period, on August 7, 2006, Colleen Kollar-Kotelly ordered briefing in docket PRTT 06-102 on how FBI was fulfilling its obligation, apparently under the 2002 DOJ directive FBI maintained did not apply to FISA, not to affirmatively use PCTDD for any investigative purpose.  PDF 39-40

Judge Kotelly has ordered the FBI to submit a report no later than September 25 (2006). This report must contain:

(2) an explanation of what procedures are in place to ensure that the Court is notified, as required pursuant to the Courts Order in the above captioned matter, whenever the government decides to make affirmative investigative use of post-cut-through digits that do not constitute call dialing, routing, addressing or signaling information in order to prevent an immediate danger of death, serious physical injury, or harm to the national security.

At the time, at least some of FBI’s lawyers believed that for FISA Pen Registers, FBI retained all the PCTDD. PDF 38

This report — dated September 25, 2006 — appears to be the report Kollar-Kotelly requested. It implores her not to follow [redacted], which  is a reference  Texas decision.

That report is followed by this one — which was submitted on November 1, 2006 — which appears to propose new procedures to convince her to permit the FBI to continue to collect and retain PCTDD.

This new document, the briefing order, adds almost nothing to the discussion.

Except for this: it reveals that FISC — not DOJ — raised Stephen Smith’s opinion. 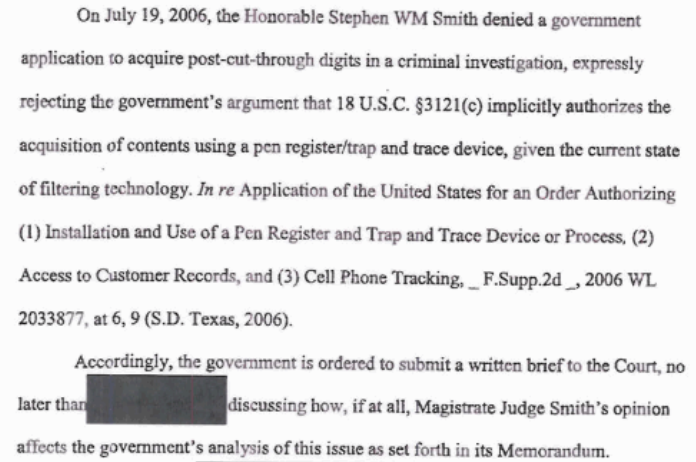 This is why I defend the FISC against claims it’s a rubber stamp. It has, on at least some occasions, done the work an adversary would normally do. And for at least 3 years, DOJ has tried to hide that FISC had to do so here.

Note what has happened in the interim? The government didn’t release this in FOIA in 2013-2014, though it was responsive to those earlier FOIA requests.

It did, however, release it now.

In the interim, DOJ gamed the new FISCR fast-track process, so as to be able to get an appellate decision approving the broader retention that Kollar-Kotelly first questioned back in 2006. Now, with that FISCR decision in pocket, DOJ has all of a sudden decided this order is no longer too classified to release (even while it still hides the timing of it).

The FISC is not perfect. But when weighing whether the FISC or DOJ (saddled, perhaps, with incomplete disclosure from NSA) has more often resulted in questionable decisions, I would almost always blame DOJ and NSA over the FISC. 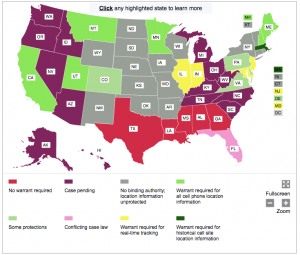 As I noted the other day, I’m working through documents submitted in EPIC’s FOIA for PRTT documents (see all of EPIC’s documents on this case here).

In addition to the documents released (the reports to Congress, the extensive reporting on the Internet dragnet), the government submitted descriptions of what appear to be two (possibly three) sets of documents withheld: documents pertaining to orders combining a PRTT and Section 215 order, and documents pertaining to a secret technique, which we’ll call the Paragraph 31 technique. In this post I’ll examine the “combined order” documents.

The Vaughn Index for this FOIA made it clear that a number of the documents Withheld in Full (WIF) pertained to orders combing the Pen Register and Section 215 (Business Record) authorities, as does this list from David Hardy’s second declaration.

Footnotes 3, 4, and 5 all note that these documents have already been successfully withheld in the EFF’s FOIA for Section 215 documents, and by comparing the page numbers in that Vaughn Index in that case, we can guess with some confidence that these orders are the following documents and dates:

As I’ll show, this correlates with what we can glean from the DOJ IG Reports on Section 215.

I’m less certain about Document 12. Both the EFF and ACLU Vaughn Indices show a 10/31/06 document (it is 82C in the EFF Vaughn) that is the correct length, 4 pages, that is linked with another 10/31/06 document (see 82B and 84, for example). For a variety of reasons, however, I think we can’t rule out Document 89S which appears only in the EFF FOIA (but not the ACLU FOIA), which is dated December 16, 2005 (intriguingly, the day after NYT exposed Stellar Wind), in which case the withheld portion might be the relevant 4 pages of a longer 16 page order.