The right wingers who insist on calling any attack by a Muslim “terrorism” — who insist on tying the San Bernardino attack to ISIS, even in the absence of evidence — do it to prioritize the fight against Islamic terrorists over all the other ills facing America: over other gun violence, over climate change, over the persistent economic struggles of most Americans. Theirs is a profoundly unpatriotic effort to put war over every other policy priority, even far more pressing ones. That stance has led to a disinvestment in America, with real consequences for everyone not getting rich off of arms sales.

It is this type of attack that we saw at Fort Hood in 2009; in Chattanooga earlier this year; and now in San Bernardino.

And he lectured Muslims to reject any interpretation of Islam that is “incompatible” with “religious tolerance.”

That does not mean denying the fact that an extremist ideology has spread within some Muslim communities. This is a real problem that Muslims must confront, without excuse. Muslim leaders here and around the globe have to continue working with us to decisively and unequivocally reject the hateful ideology that groups like ISIL and al Qaeda promote; to speak out against not just acts of violence, but also those interpretations of Islam that are incompatible with the values of religious tolerance, mutual respect, and human dignity.

Not only does this give too little credit for the condemnation Muslims have long voiced against terrorist attacks, but it holds Muslims to a standard Obama doesn’t demand from Christians spewing intolerance.

It was a horrible speech. But this line struck me.

I know that after so much war, many Americans are asking whether we are confronted by a cancer that has no immediate cure.

In context, it was about terrorism.

I know we see our kids in the faces of the young people killed in Paris. And I know that after so much war, many Americans are asking whether we are confronted by a cancer that has no immediate cure.

Well, here’s what I want you to know: The threat from terrorism is real, but we will overcome it

We have a cancer, but it’s not terrorism. And it’s not just exhibited in all our shootings. It is equally exhibited in our growing addiction rates, in the increasing mortality in some groups. Obama gave the speech, surely, to quiet the calls from those who demand he address terrorism more aggressively than he address the underlying cancer.

Obama’s horrible, flatly delivered speech made me think — even as I was watching of it — of that far more famous malaise speech, delivered by Jimmy Carter, 36 years ago.

Carter’s malaise speech, after all, was offered at the moment so much of the current malaise, the cancer, started. Inflation-adjusted wages for the middle class had already peaked, 6 years earlier. That was the moment when the rich and the super-rich started running off with greater and greater portion of the benefits of America’s productivity. 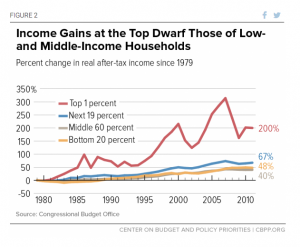 And the overthrow of our client dictator in Iran months earlier would set off our decades-long dance with Islamic extremists. Indeed, just 12 days before Carter delivered what would be dubbed the malaise speech, he authorized covert support for what would become the mujahadeen in Afghanistan. Our entanglement with the Saudis — and with it our refusal to ditch our oil addiction — has disastrously governed much of our foreign policy since, even while the petrodollar delayed the recognition that our economy isn’t working anymore, not for average Americans.

Carter correctly diagnosed his moment. After making an effort to hear from Americans from all walks of life, he recognized that people believed — correctly, we now know — that the future might bring decline, not progress.

The erosion of our confidence in the future is threatening to destroy the social and the political fabric of America.

The confidence that we have always had as a people is not simply some romantic dream or a proverb in a dusty book that we read just on the Fourth of July.

It is the idea which founded our nation and has guided our development as a people. Confidence in the future has supported everything else — public institutions and private enterprise, our own families, and the very Constitution of the United States. Confidence has defined our course and has served as a link between generations. We’ve always believed in something called progress. We’ve always had a faith that the days of our children would be better than our own.

Our people are losing that faith, not only in government itself but in the ability as citizens to serve as the ultimate rulers and shapers of our democracy. As a people we know our past and we are proud of it. Our progress has been part of the living history of America, even the world. We always believed that we were part of a great movement of humanity itself called democracy, involved in the search for freedom, and that belief has always strengthened us in our purpose. But just as we are losing our confidence in the future, we are also beginning to close the door on our past.

In a nation that was proud of hard work, strong families, close-knit communities, and our faith in God, too many of us now tend to worship self-indulgence and consumption. Human identity is no longer defined by what one does, but by what one owns. But we’ve discovered that owning things and consuming things does not satisfy our longing for meaning. We’ve learned that piling up material goods cannot fill the emptiness of lives which have no confidence or purpose.

The symptoms of this crisis of the American spirit are all around us. For the first time in the history of our country a majority of our people believe that the next five years will be worse than the past five years.

He saw the gap growing between Washington’s policy wonks and the people they purportedly served.

Looking for a way out of this crisis, our people have turned to the Federal government and found it isolated from the mainstream of our nation’s life. Washington, D.C., has become an island. The gap between our citizens and our government has never been so wide. The people are looking for honest answers, not easy answers; clear leadership, not false claims and evasiveness and politics as usual.

What you see too often in Washington and elsewhere around the country is a system of government that seems incapable of action. You see a Congress twisted and pulled in every direction by hundreds of well-financed and powerful special interests. You see every extreme position defended to the last vote, almost to the last breath by one unyielding group or another. You often see a balanced and a fair approach that demands sacrifice, a little sacrifice from everyone, abandoned like an orphan without support and without friends.

36 years ago, Carter saw that the nation was at a turning point, a moment where it could choose to continue down the path it was (and remains on) or come together again.

We are at a turning point in our history. There are two paths to choose. One is a path I’ve warned about tonight, the path that leads to fragmentation and self-interest. Down that road lies a mistaken idea of freedom, the right to grasp for ourselves some advantage over others. That path would be one of constant conflict between narrow interests ending in chaos and immobility. It is a certain route to failure.

All the traditions of our past, all the lessons of our heritage, all the promises of our future point to another path, the path of common purpose and the restoration of American values. That path leads to true freedom for our nation and ourselves. We can take the first steps down that path as we begin to solve our energy problem.

There are parts of Carter’s speech that grate, now. Given his singular focus on energy independence, he pushed hard for coal and shale oil exploitation. Carter’s endorsement of saying something nice about America dismisses the possibility some introspection about America’s mistakes was in order.

Moreover, some areas of strength, the areas where Carter believed America would endure, have not.

I do not mean our political and civil liberties. They will endure. And I do not refer to the outward strength of America, a nation that is at peace tonight everywhere in the world, with unmatched economic power and military might.

We still have unmatched military might and the largest economy, but that hasn’t brought us peace or respect for civil liberties. Instead, the monster Carter and his advisor Zbignew Brzezinski first unleashed led us to double down on our own malaise, one which led, after many years, to Obama’s cancer speech.

And while the initial response to the speech was quite positive, Carter squandered the value of the speech.

Obama was, in my opinion, wrong to capitulate to those who want to focus singularly on terrorism rather than on America’s problems more generally. Because both here and abroad, our failure to address the malaise Carter identified decades ago remains the more critical problem.