Tag Archive for: The Dead 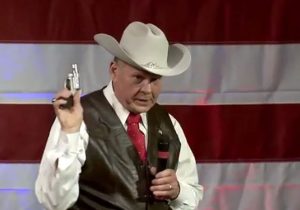 It is 2017 and here we are. Yep, the greatest country ever. The face of humanity. Elected leaders won’t even admit global warming, much less try to fix it. Hell, they don’t even want the gays to have wedding cakes. “Creative” book schemers like Elon Musk are considered brilliant. But, hey, that is where we are.

No reason to ignore the truth. Unless you are Alabama.

Thirty two teeth in a jawbone
Alabama cryin’ for none
Before I have to hit him
I hope Roy’s got the sense to run.

Reason those poor young girls love him
Promise them anything
Reason they believe him
He wears a big diamond ring (and a little toy gun).

It used to be our little weekend Trash Talk was an escape. From politics. From war. From torture. From the idiocy. There is no escape now.

Welp, at least we know that Alabama football is totally clean and good. And that good old Nick Saban purity will have a test today against Mississippi State in Davis Wade Stadium. Starkville can be tough. It is hard to see anybody slowing the Tide’s roll, but this may be the best shot. Michigan State at the the Horseshoe and the Buckeyes should be really interesting. Not the blockbuster it once could have been, but still a huge game. A sleeper may be Oklahoma State at Iowa State. The best game though is Notre Dame at Miami. The Hurricanes have not had a game like this in a long time. Two storied programs, only one can win, both in effective dumpster fire mode for a long time. I’ll take the Canes. The other huge game is TCU’s Horned Frogs at Oklahoma. I wish FreePatriot were here for this. In his honor, I’ll take Baker Mayfield and the Sooners.

Now for the Pros. Roger Goodell versus the hick Simpson’s like looking villain Jerry Jones. Who do you root for there? Is there some way they can off each other in mutually assured destruction? That would be optimal.

The Cards lost their season on their home turf (yes, it is real grass) here Thursday night. Strange game, with injuries everywhere. Ugly. From there, can the Jaguars hold off the Bolts at home? Seems like a throwaway game, but it is really an interesting one. I have no clue, it is a toss up. There is no reason the Pack at Soldier Field should matter, but it kind of does. Same for Saints at Bills in Buffalo. And ditto for Vikes at Washington.

Vikes are fairly quietly 6-2. Sam Bradford may be fragile, but he is a pretty decent QB if he is on the field. But he is not, Case Keenum is piloting the ship, and doing so very well. Teddy Bridgewater may be back, but this is Keenum’s team right now. Probably I am a dope, but I like the Skins for the home upset win.

This weekend is the Brazilian Grand Prix. Like the Italian, there is just too much history to ever take your eye off the Brazilian. Ham has the Drivers, and Mercedes has the Constructors. What started as a real battle has turned into a yawner. That is not good for fans, and it is not good for F1. For now though, it is what it is. But Ham crashed out in qualifying, and teammate Valteri Bottas is on pole at Interlagos. With Vettel right behind. The Circus may have been decided for the year, but a very fun race may be on tap.

Okay. That is Trash for yet another week. Dumpster dive in with gusto. There is great music this week from both Honey Honey Band and the Dead. Killer tracks, give them a try. Or else I will send the guy with the short fingers and his friend with the little toy gun after you.