On Strategy, Drones, and Climate Change 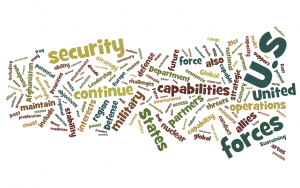 Open up the new Defense Strategic Guidance DOD released today. Hit Ctrl-F. Type in “drone.” Count how many times the word appears in the strategic document that is supposed to guide us through 2020.

Now do the same, Ctrl-F, “Climate change.” Count the mentions of the phenomenon that will cause accelerating amounts of instability between now and 2020.

The number of appearances, for both phrases, is zero.

DOD just rolled out new strategic guidance without once mentioning the fancy new toys that are a cornerstone of their new-and-improved small footprint strategy or the phenomenon that will serve as significant a disruptive force as terrorism, China, and cyberwar in the next 8 years, all things that show up in this defense strategy.

And all that in a defense strategy that basically forswears large scale stability operations (AKA Iraq and Afghanistan).

Mind you, the defense strategy doesn’t ignore stability–which it mentions ten more times than it does drones or climate change. But in a thoroughly Rumsfeldian manner, it seems to just believe stability … happens.

All in a time when America’s neoliberal economic policies (“commerce,” “prosperity,” and “economic growth”–at 2, 4, and 1–also show up more times than drones or climate change) also contribute to instability and where more and more countries seem to be falling as states.

Now, partly, the defense strategy forswears large scale stability operations, because this entire strategy is an effort to pretend it’s cutting $487 billion over ten years when it’s really just ending two expensive wars, refocusing from Europe to Asia, and assuming we’ll make do with things like Special Forces and those drones the strategy doesn’t mention. To a significant degree, this new defense strategy is a pre-emptive (and thoroughly successful, from the looks of things) attempt to convince the press that DOD is suffering under the same rules of austerity the rest of us are, while really only moving some shells around on a card table.

I suspect the defense strategy also forswears large scale stability operations–AKA nation building–because we suck at it, and no President wants to embrace something we’ve failed at for ten years straight, no matter how important for our security. (Note, it does say it will retain the ability to “regenerate”–like a lizard’s limb–stability operations if the need arises. How we’re going to regenerate something we never had, I don’t know.)

So rather than explaining what we’re going to do with all the countries we destabilize with drone campaigns (AKA Pakistan) or what we’re going to do as Bangladesh and North Africa and the Horn of Africa and much of Southeast Asia increasingly suffer from droughts or floods, setting off catastrophe and migration and more failing central governments, we’re just going to assume stability … happens.

It’s a nice strategy (and an even neater trick, convincing journalists that an increase in defense spending equates to a cut). I’m all in favor of ending these big land wars. But the whole thing also seems to be a strategy for fostering instability as much as one to prevent it. And it doesn’t even consider two of the most destabilizing forces on the horizon in the next 8 years.