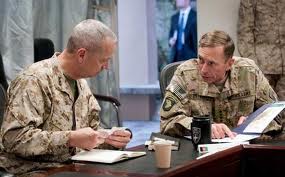 There are too many tentacles, evolving too quickly, to go too deep on all the facts that have rolled out even in the last twelve hours. But the General Allen/Jill Kelley bit is fascinating. Remember, the handful of emails Paula Broadwell sent to Kelley reportedly did not mention Petraeus by name. This latest report at least raises the possibility Broadwell was referring to an inappropriate relationship between Kelley and Allen, and not Kelley and Petraeus. I am not saying such is the case, but it is also arguably consistent with the currently known substance of Broadwell’s emails to Kelley, so the question is valid to be raised.

A couple of other data points to note. First, Broadwell’s father made a somewhat cryptic comment yesterday that may be being explained now:

“This is about something else entirely, and the truth will come out,” he told the Daily News.

“There is a lot more that is going to come out … You wait and see. There’s a lot more here than meets the eye.”

He said that his daughter, who’s at the center of the controversy that prompted CIA director David Petraeus to resign from his post, is a victim of character assassination, and that there’s something much bigger lurking behind the curtain.

Second, as I noted early yesterday morning, Jill Kelley has hired some of the most astoundingly powerful criminal defense and PR help imaginable:

They hired Abbe Lowell, a Washington lawyer who has represented clients such as former presidential candidate John Edwards and lobbyist Jack Abramoff. And the couple are employing crisis PR person Judy Smith, who has represented big names like Monica Lewinsky, Michael Vick and Kobe Bryant.

Now, let’s be honest, an innocent recipient of a handful of crank non-threatening emails, as Kelley was commonly portrayed when her name first came out, does NOT need that kind of heavy hitter professional service. Seriously, Abbe Lowell is not only a great attorney, he is as preeminent a counsel as exists for spook and national security defense cases. No one in their right mind pays for that unless they need it, especially 1,000 miles away from his office.

Another oddity occurred last night: The North Carolina home of Paula Broadwell was searched for nearly four hours by a full on execution team from the FBI. From the New York Times:

On Monday night, F.B.I. agents went to Ms. Broadwell’s home in Charlotte, N.C., and were seen carrying away what several reporters at the scene said were boxes of documents. A law enforcement official, speaking on condition of anonymity because the case remains open, said Ms. Broadwell had consented to the search.

The key word in that quote that strikes me is “consensual”. Broadwell has lawyered up too, having hired prominent Washington DC defense attorney Robert F. Muse. If an attorney feels his client is the target of a proposed search, he does not consent, he makes the officers get a warrant and search for only what a court orders and nothing else. You have to wonder what was being searched for that Broadwell and her counsel were not more worried about?

It is still early in the Allen portion of this mess, but it sure does cast the entire matter in a new light. Seriously, 30,000 pages of communications between Allen and Kelley in two years? That is 41 pages a day. When in the world did Allen find time to make war? And keep in mind, Kelley had already been stated to be regularly (up to once a day) emailing Petraeus for some of that period…she must be getting carpal tunnel syndrome.

There is also the pressing question of exactly what the methods and means were for discovering and extracting these 30,000 some odd pages of communications between General Allen and Jill Kelley, and how that came to pass when she was supposedly and innocent victim of Paula Broadwell. There were already great questions in this regard about Broadwell and Petraeus. I will leave that for later, I suspect Marcy may have something to say on those issues.

Four-star generals. Two of them wrapped up in one salacious scandal. The Stones may need to modify their lyrics ever so slightly.