Shanghai Culls Poultry as H7N9 Spreads, But Relevant US Research Remains Suspended Due to Security Theater 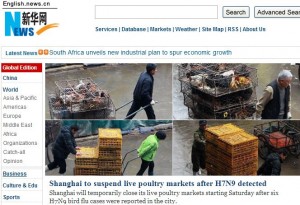 Partial screen capture of the home page of the Chinese news agency Xinhua (http://www.xinhuanet.com/english/), showing the culling of poultry in Shanghai.

Yesterday saw a number of developments in the ongoing story of the emerging H7N9 virus in the Shanghai region of China, as the virus was identified in pigeons being sold at a meat market and the culling of all poultry at that market was initiated. One close associate of an infected person still is being monitored in isolation after developing possible symptoms of the virus and might turn out to be the first case of person to person transfer of the virus. Meanwhile, the CDC already has started work in the US that could lead to a vaccine.

As I pointed out yesterday, key questions to be addressed in understanding how dangerous this virus will be revolve around the issue of how the virus jumps from one host to another and whether it acquires the ability to transfer from one person to another. Sadly, the most directly relevant research in the US on these questions remains suspended due to a cowardly display of security theater by the National Science Advisory Board for Biosecurity. Back in late 2011, I wrote about this board asking two prominent scientific journals to censor work that had been approved for publication. The work eventually was published, but only after a hiatus of about six months. As I pointed out at that time, the fears expressed by NSABB were then shown to be entirely unfounded.

In their report online today on the latest developments in the H7N9 emergence, CNN provided a link at the bottom of their story to this story they published back in January, with the headline “Bird flu research resumes — but not in U.S.” From that report:

Drama surrounding research on the deadly H5N1 avian flu continues, as 40 scientists urge work on the virus to continue in countries that have established guidelines on the safety and aims of the research. The United States is not among them.

This new correspondence, a letter from researchers published Wednesday in the journals Science and Nature, comes after a “voluntary pause” in the research, which scientists announced in January 2012.

In many countries, those objectives have been achieved, according to the letter, and researchers who have permission from their governments to continue this research should do so.

Ah, but the US never misses out on an opportunity to over-play its hand when it comes to security theater, so the work hasn’t restarted here:

But the United States has been unclear about how long it will be before it issues official guidelines for conditions under which H5N1 transmission research can continue, the letter says. As such, laboratories in the United States and facilities abroad that receive U.S. funding should not proceed with their transmission studies.

Back when the NASBB first proposed to censor the work that had been done, I had this to say (emphasis added):

However, in the case of the bird flu version of influenza virus, the basic flu virus is found worldwide and undergoes rapid changes. The fact that flu virus changes rapidly suggests that, as mentioned in the snippet above from ScienceInsider, a version similar [to] that developed in the controversial experiment could even arise naturally. Those who would suppress publication of details on how Fouchier’s group developed the pathogenic virus would prevent responsible researchers repeating the work in order to develop an effective treatment for the virus.  Since the virus could arise naturally, preventing work on a treatment is completely irresponsible.

In the CNN article, we have this from one of the scientists whose work has been put on hold (emphasis added again):

“It’s so easily mutated, so the risk exists in nature already, and not doing the research is really putting us in danger,” Kawaoka said at a press conference Wednesday.

While NSABB was busily subjecting us to needless security theater, nature produced what could be the virus for which scientists were trying to prepare us. They were working with the H5N1 virus to address the very questions of host-jumping and person to person transmission that now lie at the heart of the H7N9 emergence. In the best of all worlds, H7N9 will turn out not spread quickly enough to turn into a deadly pandemic. In that good scenario, H7N9 will serve as a wake-up call to once again free the hands of researchers to carry out work that is vital to understanding deadly bird flu virus outbreaks. The alternative is too terrible to consider. If we see widespread death from H7N9, we will be left to wonder how many of those deaths could have been prevented if this important research had not been suspended.