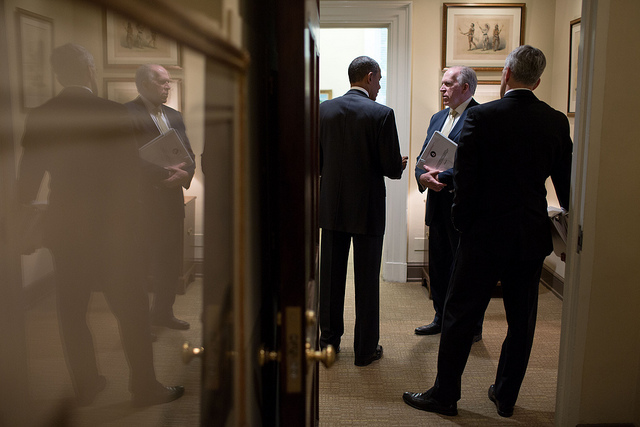 In a piece that gets at some of the points of leverage between the White House and CIA over torture, Mark Mazzetti describes George Tenet’s effort to “challenge” the torture report.

It suggests Brennan’s close ties to Tenet — Brennan was once Tenet’s Chief of Staff — led the CIA Director to reach out to Tenet to lead pushback. It describes how Brennan’s close ties to Obama Chief of Staff Denis McDonough from when he served as White House Counterterrorism Czar led McDonough to intervene when Dianne Feinstein tried to require any CIA review to take place in Senate Intelligence Committee space.

All that’s beside the real source of CIA’s power over the White House — the fact that torture operated as a Presidentially-authorized covert op for years, as has the drone program, which means CIA has the ability to implicate both George Bush personally (and Obama, in illegal drone strikes), as well as the Office of the President more generally.

My favorite detail, however, is that Cofer Black has also been involved in this pushback campaign.

Just after the Senate Intelligence Committee voted in April to declassify hundreds of pages of a withering report on the Central Intelligence Agency’s detention and interrogation program, C.I.A. Director John O. Brennan convened a meeting of the men who had played a role overseeing the program in its seven-year history.

The spies, past and present, faced each other around the long wooden conference table on the seventh floor of the C.I.A.’s headquarters in Northern Virginia: J. Cofer Black, head of the agency’s counterterrorism center at the time of the Sept. 11 attacks; the undercover officer who now holds that job; and a number of other former officials from the C.I.A.’s clandestine service. Over the speakerphone came the distinctive, Queens-accented voice of George J. Tenet.

Over the past several months, Mr. Tenet has quietly engineered a counterattack against the Senate committee’s voluminous report, which could become public next month. [my emphasis]

According to Ken Dilianian’s version of the same story, Black will not be allowed to preview the report — he’s probably among the dozen people who thought they could review it but recently learned they would not be able to.

About a dozen officials were called in recent days and told they could read the executive summary at a secure room at the Office of Director of National Intelligence, as long as they agreed not to discuss it, four former officials said.

Then, on Friday, CIA officials called them and told them that due to a miscommunication, only former CIA directors and deputy directors would be given that privilege. Former directors Michael Hayden, Porter Goss and George Tenet have been invited to read it, as have former acting directors John McLaughlin and Michael Morell.

Black’s involvement, of course, should be a story unto itself.

According to the CIA’s official version of torture, it got authorized under the September 17, 2001 Finding by language authorizing the capture and detention of top Al Qaeda officials. But they didn’t start considering torture until they picked up Abu Zubaydah at the end of March in 2002. They didn’t start torturing, the official story goes, until DOJ gave them the green light in August 1, 2002.

Why, then, would Black need to be involved in the torture pushback?

He left the Counterterrorism Director spot in May 2002, well before the torture started — at least according to the CIA version, but not the personal experience of Ibn Sheikh al-Libi and Binyam Mohamed, both of whom got tortured before Black’s departure. In his book Jose Rodriguez claims, falsely, the torture program started in June, and he led it. If this official CIA chronology is correct, Black should have had no role — and no personal interest — in the torture program.

And yet there he is with the other torturers, leading pushback.

Even in their pushback effort, then, the CIA proves that they’ve been lying for years.