The Blame the Media Movement 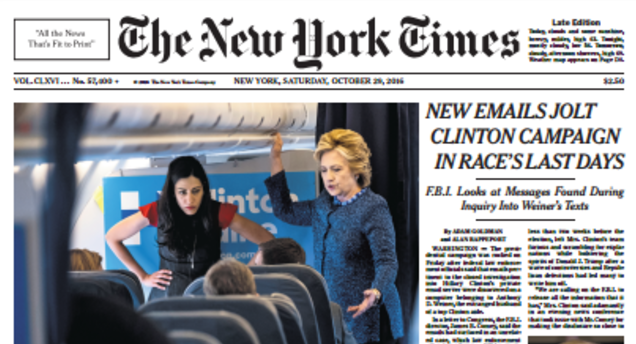 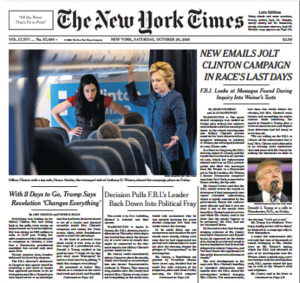 There was an odd moment yesterday on Twitter when a bunch of people were RTing screen caps of NYT’s front page the day after Jim Comey’s October 28 letter, blaming the media for Hillary’s loss.

I think the idea behind their complaints is that because the media — as embodied by the NYT — spent so much time focusing on Hillary’s emails, she lost.

I agree that “the media’s” focus on Hillary’s email contributed significantly to the loss. But the way in which people were complaining about it betrays a lack of understanding of the problem.

First, consider what they were complaining about. The NYT’s print edition had a topline story that “New emails jolt Clinton campaign in race’s last days.” That is almost exactly the Hillary camp’s preferred explanation for why they lost, that the Comey announcement roiled her campaign right at the end. The NYT also focused on Comey’s inappropriate behavior. And also reported what Trump said about the emails — again, reporting what the opposing candidate actually said.

Here’s how Media Matters — which because of close ties between the campaign and the organization, should be considered a house organ for the campaign — dealt with this treatment in real time.

Over the past two days, The New York Times has devoted five of its six above-the-fold articles to FBI director James Comey’s letter to congressional leaders indicating that the Bureau is reviewing additional “emails that appear to be pertinent to the investigation” of Democratic presidential nominee Hillary Clinton’s use of a private server as secretary of state. By providing such prominent coverage, the Times has indicated that the letter is news of the highest possible significance — in spite of the Times’ own reporting that FBI agents have yet to read the emails and determine if they are significant and the letter “did not reopen” the investigation.

In his October 28 letter, Comey wrote that the FBI has “learned of the existence of emails that appear to be pertinent to the investigation” while investigating an unrelated case and is taking “appropriate investigative steps designed to allow investigators to review these emails to determine whether they contain classified information, as well as to assess their importance to our investigation.” He added that the “FBI cannot yet assess whether or not this material may be significant, and I cannot predict how long it will take us to complete.”

Despite the paucity of information Comey indicated was available, the letter triggered a firestorm of speculative media coverage.

The Times, which has both a responsibility as the leading national newspaper to put the story in appropriate context, and a long history of applying excessive and disproportionate scrutiny to news about Bill and Hillary Clinton, led the media’s feeding frenzy.

On Saturday, the entirety of the Times’ front page above the fold was dedicated to three separate articles about Comey’s letter. The lead story declared, “New Emails Jolt Clinton Campaign In Race’s Last Days; FBI Looks at Messages Found During Inquiry.” But as that article noted, it is not clear whether the emails are “new” or duplicates of emails previously reviewed by the FBI; the FBI “had not yet examined” the emails.

The front page also featured articles on Trump’s response to the news and on Republican and Democratic lawmakers’ criticism of Comey in light of the letter.

The Times front page drew criticism for providing such prominent coverage before it was clear whether the emails in question were even relevant to the investigation.

The MM piece does raise two absolutely fair content complaints: that the NYT said FBI “reopened” the investigation (though I’m not sure the distinction is as important as they make out, especially since the FBI had at least one other open investigation during this period), and that the headline said the emails were new when that was not yet clear.

MM is also absolutely obsessed with the way NYT has emphasized this on their front page. You know? A dead tree front page? Not just any dead tree, but the NYT’s dead tree?

Of the 100,000 or so people who decided this election, how many of them get their news from the NYT, much less the dead tree version of the NYT? In both the rural and urban areas where Hillary lost MI, you’d have to go to a store, and even then the Sunday Times might be the only thing you could get in dead tree form in timely fashion. I’m sure it’s easier to get the dead tree NYT in Philly, but not in Erie, PA, two other places where Hillary lost this election. So while the NYT’s coverage surely matters, its relative placement on the dead tree is not the thing you should focus on.

You want to track what caused the undue influence of the Comey letter on the election? A far better place to focus is on Bret Baier’s claim, a few days later, that two sources had told him with 99% certainty that Hillary was going to be indicted. MM did cover that, for several days straight, including showing that Fox kept reporting on the claim even after Baier retracted it. 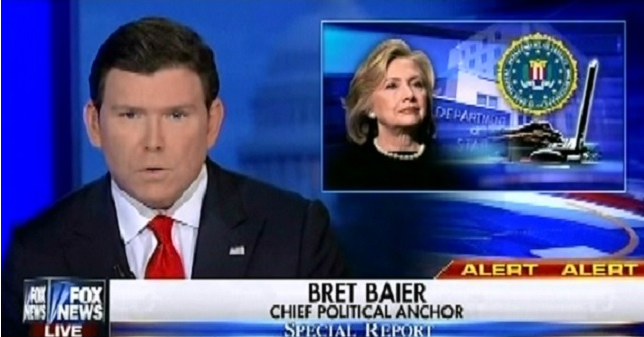 But that’s not the other thing you need to track.

Particularly given that the rural areas where Hillary underperformed have often lost their local press (which might otherwise have exposed them to the AP version) you also need to account for social media. It would be bad enough if that consisted solely of people consuming the conspiracy theories their buddies pass on. But, as has increasingly been discussed both during and since the election, those have been hijacked.

On both, people — even some without any stake in the election, such as kids in Macedonia — created false claims to generate clicks to make money.

“This is the news of the millennium!” said the story on WorldPoliticus.com. Citing unnamed FBI sources, it claimed Hillary Clinton will be indicted in 2017 for crimes related to her email scandal.

“Your Prayers Have Been Answered,” declared the headline.

For Trump supporters, that certainly seemed to be the case. They helped the baseless story generate over 140,000 shares, reactions, and comments on Facebook.

Meanwhile, roughly 6,000 miles away in a small town in the former Yugoslav Republic of Macedonia, a young man watched as money began trickling into his Google AdSense account.

Most of the posts on these sites are aggregated, or completely plagiarized, from fringe and right-wing sites in the US. The Macedonians see a story elsewhere, write a sensationalized headline, and quickly post it to their site. Then they share it on Facebook to try and generate traffic. The more people who click through from Facebook, the more money they earn from ads on their website.

“People in America prefer to read news about Trump,” said a Macedonian 16-year-old who operates BVANews.com.

BuzzFeed News’ research also found that the most successful stories from these sites were nearly all false or misleading.

Far more troublingly, Facebook’s algorithm that influences what news people see not only doesn’t sort out fake news, but they purposely avoided fixing the problem during the election because that would have disproportionately affected conservative “news.”

Gizmodo has learned that the company is, in fact, concerned about the issue, and has been having a high-level internal debate since May about how the network approaches its role as the largest news distributor in the US. The debate includes questions over whether the social network has a duty to prevent misinformation from spreading to the 44 percent of Americans who get their news from the social network.

According to two sources with direct knowledge of the company’s decision-making, Facebook executives conducted a wide-ranging review of products and policies earlier this year, with the goal of eliminating any appearance of political bias. One source said high-ranking officials were briefed on a planned News Feed update that would have identified fake or hoax news stories, but disproportionately impacted right-wing news sites by downgrading or removing that content from people’s feeds. According to the source, the update was shelved and never released to the public.

It’s unclear if the update had other deficiencies that caused it to be scrubbed.

“They absolutely have the tools to shut down fake news,” said the source, who asked to remain anonymous citing fear of retribution from the company. The source added, “there was a lot of fear about upsetting conservatives after Trending Topics,” and that “a lot of product decisions got caught up in that.”

A similar effect is happening as we speak, spreading the false claim that Trump won the popular vote.

We actually don’t know what the media diet of the average person who normally would have voted Democratic is — I sincerely hope it’s something we get a handle on. But we need to understand that we would be lucky if the dead tree NYT is what we need to worry about.