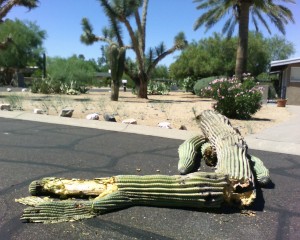 Despite the wall to wall coverage, not just on NBC and MSNBC, but all the networks, the hand wringing, the eulogizing, the lionization, the body lying in state at the Kennedy Center, and the funeral worthy of royalty, not enough has been said about the recent passing of a giant. Probably because all that bleating was about Saint Tim of Russert. I am talking about a different giant. A giant in my own family has passed. Granpa Pricky.

Granpa Pricky was our 24 foot tall saguaro cactus that majestically guarded the east entrance to Casa de bmaz since at least several decades before Casa de bmaz was built, and our house is almost fifty years old. Just woke up one morning and there it was, keeled over into the road. Saguaros are truly 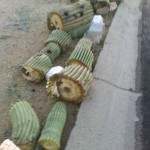 grand and majestic entities, standing tall as the guardians of the Sonoran desert. Granpa Pricky was not just a centurion, he was a home as well. There are now a couple of homeless woodpeckers. Actually these peckars don’t even peck wood that much. They like to perch on my chimney and wail on the metal vent cover on the top. Sounds like a freaking machine gun or jackhammer in the house. Very annoying. Metalpeckers.

At any rate, an autopsy was conducted. Any and all of these photos can be enlarged by clicking on them.

The whitish material in the center is very squishy. There is simply a ton of moisture in saguaros. And we don’t even have the cacti on drip systems; all they get is rain water, and it does not rain that much here. It is kind of fibrous 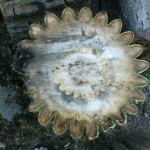 pulp like stuff. People trying to survive in the desert desperate for water cut up that pulp and put chunks in their mouth to suck the water (and there is a lot) out. The cactus does produce a red, bulbous, pretty sweet fruit that is fully edible and not bad. Granpa Pricky died on June 5. Here is a photo just taken of the same cross section depicted above.

Note how the pulp is shrinking as opposed to the outer shell and especially the spine. The spine is the circle of dowel like looking things in the middle. When you tap on the outer surface of the pulp, which has hardened, you can tell from the sound that there is still simply a ton of water in there. It has been really hot here lately (112 degrees today), this thing is dead and cut up into pieces; yet it still holds that much water. Pretty remarkable. Saguaros 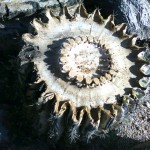 have a relatively long life span. They take up to 75 years to develop a side arm. Granpa Pricky had three arms. The arms themselves are grown to increase the plants reproductive capacity (more apices equal more flowers and fruit). The growth rate of saguaros is strongly dependent on local precipitation patterns, and saguaros in drier western Arizona grow only half as fast as those in and around Tucson, Arizona. The night blooming flowers appear April-May and the sweet, ruby-colored fruit matures by late June. Each fruit can contain up to 2,000 seeds. Saguaro flowers are self incompatible and require a pollenizer to supply viable pollen. For more information, see here and here.

Well, that is the end of the desert discussion for today. If you are interested in knowledge of the desert ecosystem and all it’s different species, as well as some other Southwest, Pacific and Pacific Northwest ecologies, please visit the site of the Center for Biological Diversity. The center was founded decades ago by a friend, Dr. Robin Silver, and it really is a remarkable organization, the EFF or ACLU of Southwest ecology. Their website is also a superb resource of information. 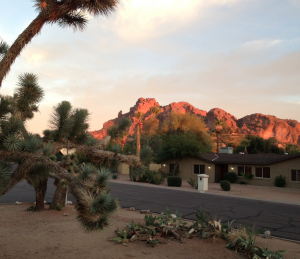 In closing, a photo of Camelback Mountain Western Camel Head’s Face/Praying Monk Rock, taken from close to the exact spot of ground where Granpa Pricky once stood guard. In the previous Sunset Musings post, I was forced to use a picture culled from the web that was actually taken at sunrise. This is the real deal taken during "golden hour". Last week was fast, furious, and a bitter disappointment. We got some incredible and fascinating substantive work in this weekend thanks to Marcy’s Ghorbanifar Meetings Timeline post. But I also wanted to do a couple of general, and lighter, things to give everybody a chance to vent, decompress, and recharge their batteries. So, the same rules from yesterday’s The Sun Always Rises post are in effect. Chat and comment away on any of the things we do or you want. If there was/is stuff in the news that is noteworthy, give a link and let’s discuss it (I haven’t even done my daily reading yet). Tomorrow, it is back to the war. FISA is not a done deal until the Senate sends it out in a form that Bush signs. But our backs are to the wall, and the road steeply uphill from here. Got some more effort left in you? I do.