The St. Louis Cardinals are your 2011 World Series Champs, and man game 7 sure was a big letdown after the scintillating game 6. But now it is on to football and Formula One, where the heart of this blog truly lies. And Charlie Brown has more than the Great Pumpkin going for him this weekend, there is absolutely great football too.

Let’s start with the NCAA. Perhaps the most interesting game is tonight’s matchup of the Stanford Tree visiting USC’s Tommy Trojan. The Tree is 7-0 and 6th ranked, but the Trojans are an under the radar 6-1, and the only loss being to ASU in Tempe, which is nothing to be ashamed of. Andrew Luck is all world, and they are even letting him call some of his own plays tonight ala Peyton Manning. Matt Barkley is no slouch either though, in fact his stats are a near match with Luck’s. The difference really is, surprisingly, that Stanford has a far superior running game to the Trojans, who are usually known for that. USC is also weaker in the D-secondary. Those two factors should provide a win for the Tree, but it should be a good game and USC has the potential for a big upset here if Monte Kiffin can coach up the Troy defense beyond expectations.

Another late game, Clemson at the Ramblin Wreck of Georgia Tech also looks to be quite good. Clemson and star QB Tahj Boyd have been a real surprise this year. Tech (along with South Carolina later) is one of the few remaining obstacles between the Tigers and a legitimate shot at the BCS Championship game. I have a hard time believing it, but I think that just may happen and they start the push tonight by edging out Tech. The other game to keep an eye on is Baylor v. Oklahoma State. OSU is 3rd ranked and an offensive powerhouse, but Baylor and their mad good QB Robert Griffen III have some juice too. If this game were in Waco, I would smell upset; but it is in Stillwater, so OSU should prevail. Honorable mention games are Boomer Sooner at Bill Snyder’s Kansas State and the on a roll Spartans of MSU at the Cornfuskers.

It is also a fine slate of games in the pros, headed up, of course, by the TEBOWL! That’s right, any game Tim plays in IS the TeBowl. Sunday’s version involves the Deetroit Kitties coming to meet Baby Jesus at Mile High. Kitties are smarting from two losses in a row and need some steam heading into next week’s game against the Bears. But Stafford has a bad ankle and the running game is hurting without Jahvid Best. The Lions should win this, but they better get down on one knee and Te-Bow in prayer they do. The real top game is, of course, the Patsies at the Stillers. Bieber v. Big Ben. One shaky defense versus another suddenly shaky defense. Both teams have superb passing games and solid enough running games to get the job done. So, it comes down to the D’s. This would normally be a gimme for Pittsburgh, and indeed their passing defense is still somehow top rated in spite of other cracks in the Steel Curtain. But Tom Brady owns the Stillers and Bill Bel has had a bye week to coach up his defense. Bieber wins another tough game. Honorable mention to ‘Boys at Iggles and Skins at Bills. 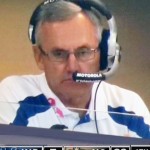 Oh, I want to mention one little piece of schadenfreude lost in last weekend’s bender, the debut of the new super duper coaching staff member for the woebegone Indianapolis Colts. Yep the ‘ole Cheatin Sweater Vest himself, Jim Tressel (Photo Credit to NBC sports via SportsByBrooks screencap). The Vest worked his usual magic in helping the Peytons to a hard fought 62-7 not-quite-victory.

Also on tap is the inaugural Grand Prix of India. Qualifying went off very early this morning, with Sebastian Vettel taking his 13th pole of the year. Dude is just too good and his equipment is superior to boot. Vettel is followed by WEbber, Alonso and Button on the starting grid. Hamilton was fast in qualifying, and would have been P2 but for a 3 spot penalty for his assholey driving in previous competition. I got my first look at the course during the qualifying. Looks like a fast and possibly interesting track, but fairly ugly surroundings. We shall see after the first real race. By the way, in some stunning F1 news this week, our old buddy Chris Christie has helped lead an effort that has resulted in F1 coming to the streets of New Jersey. This could really be a fun setup done right. Credit where due.