How Did Investigators Find the Victims?

There’s one more thing I’ve been trying to understand from the Sandusky presentment: How did the grand jury find the victims described in the presentment?

For some of the victims, the answer is clear. The mother of Victim 1 (the boy who Sandusky met at his high school) for example, told his school and the school, in turn, told the cops. That’s what set off this investigation.

From there, they would have quickly found Victim 6 (the boy whose mother called the University cops), because there was a lengthy report on what happened between him and Sandusky in 1998. And it seems that Victim 6 may have led investigators to contact Victims 5 and 7, both of whom he knew (he also alerted investigators to a B.K. who was also allegedly abused; the grand jury couldn’t subpoena him because he is serving in the military overseas).

And it’s always possible that a victim or a witness came forward after the first reports of the grand jury investigation were made public this spring.

But for some of the kids, it seems much more likely that an insider–someone from Penn State’s Football program–alerted the grand jury. This is particularly true for Victims 2 (the boy McQuery witnessed being raped in 2002) and 8 (the boy a janitor witnessed being fellated in 2000), since their identities remain unknown to the grand jury.

Here’s a summary of the victims with a description of any obvious way by which they would come to the attention of the grand jury. 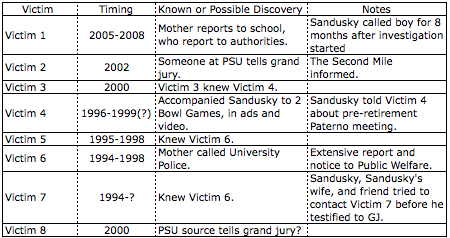 Here’s one possible–speculative–scenario for how the investigation moved forward and how new victims were discovered.

The investigation started at least by November 2008. Victim 1’s mother contacted her son’s school about Sandusky, who was then a full time volunteer football coach. The school alerted authorities. In addition to the victim, investigators spoke to at least a high school wrestling coach, the assistant principal, and another kid who had witnessed Sandusky and the victim together (Sandusky touched the other kid inappropriately, too). In addition, the state tracked almost 120 calls, over 19 months, from Sandusky to Victim 1 as the boy stopped contact with him and the investigation started.

The investigation associated with Victim 1 would presumably have led to Victim 6, the boy whose mother had alerted the University Police to inappropriate contact in 1998. The authorities did an extensive report on that incident, which they would have found quickly. Additionally, it is likely that Victim 6 alerted authorities to Victims 5 and 7, both of whom he knew through Sandusky from that same time period. Note that Sandusky, his wife, and a Sandusky friend called Victim 7 in the period before he testified before the grand jury, though he did not return the calls. [Update] Note: I sort of assume the investigation got to Victims 5, 7, and B.K. within the last year, because had they done so earlier, B.K. would presumably have returned from deployment, giving them a chance to interview him.

Here’s where I wonder whether the grand jury started looking into why Sandusky was ousted in 1999, a year after the incident with Victim 6, and in a period (they would have presumably discovered) that he had also allegedly molested two or three other boys.

And that may have led them to Victims 4, and through him, to Victim 3, who knew him.

Victim 4 is the boy whom Sandusky brought to two consecutive Bowl Games, the 1998 Outback Bowl (which was held January 1, 1999) and the 1999 Alamo Bowl (December 28, 1999). In addition Sandusky gave Victim 4 the most elaborate gifts of any of the victims–things like a snowboard, golf clubs, and ice hockey equipment. And Victim 4 accompanied Sandusky to many public events, sharing his hotel room or siting at the coaches table with him. Victim 4 showed up in a video Sandusky made and in a Sports Illustrated article on Sandusky. In other words, almost alone of the victims, those close to the football program would have reason to know precisely who he was. And given that sexual abuse with Victim 4 happened in both private (hotels) and public spaces (the football sauna), it is possible people suspected the relationship was more than just a fatherly one.

(Note, I wondered whether Victim 4 could be the boy the janitor saw being fellated by Sandusky in 2000; that’s unlikely, since one of the witnesses thought the boy was between 11 and 13, and Victim 4 would have been 16 by 2000. But it’s not impossible.)

The presentment describes that after Paterno told Sandusky he would not be the Head Coach, Sandusky came to Victim 4 to complain.

Victim 4 remembers Sandusky being emotionally upset after having a meeting with Joe Paterno in which Paterno told Sandusky he would not be the next head coach at Penn State and which preceded Sandusky’s retirement.

Given that this hint that Sandusky might have been forced out is tied to Victim 4, I now wonder whether it was this more public relationship, on top of the incident with Victim 6, that led Paterno to push Sandusky out, if that’s what happened.

In other words, I’m wondering whether the investigators started to look into why Sandusky was pushed out in 1999. And in the process of asking questions to someone from the program, found out about Victim 4. Note, if someone from PSU tipped off the investigators to this boy, it probably wasn’t McQueary, as these events all seem to have occurred during the window–1997 to 2000–when McQueary was away from State College pursuing a pro career.

Which leaves Victims 2–the unknown boy who was anally raped in 2002–and Victim 8–the unknown boy whom Sandusky allegedly fellated in 2000. It’s pretty clear that someone at Penn State had to have told investigators about these boys, as the boys haven’t been identified.

Now, two different janitors testified about Victim 8 (and more knew about him), though the primary witness suffers from dementia and did not testify. But it’s possible any one of the other janitors working that night (the two witnesses appear to still work at Penn State) heard of the investigation and alerted investigators.

But I also wonder whether there’s someone who knew of all of these stories: Victim 4’s rather public tie to Sandusky, Victim 2, whose plight was discussed 5 ranks up the chain to Spanier, and Victim 8, whom the night janitors learned of?

If so, that person probably came forward fairly late in the investigation. Mike McQueary testified before the grand jury in December 2010; Tim Curley and Gary Schultz both testified on January 12, 2011. (It also appears that the head of The Second Mile, Jack Raykovitz, testified this year, because the charity says the Attorney General’s office first contacted them early this year).

tweets from our circle
emptywheel@emptywheelThis sounds like a job for Mike Flynn. twitter.com/pbump/status/1…21 minutes ago22 May 2022
bmaz@bmazGood. Although Oklahoma should be shunned too over their hideous anti-women policies. Oklahoma is a disgrace to the… twitter.com/i/web/status/1…2 hours ago22 May 2022
RayneToday@raynetodayLOL Perhaps the mythical "single server" the right-wing wanted turned over after the DNC was hacked already resides… twitter.com/i/web/status/1…6 hours ago22 May 2022
Ed Walker 🍞🌹💉💉@MasaccioEWRT @espinsegall: Good morning. So Ginny Thomas was paid for many years to lobby against the ACA while Clarence Thomas on several occasions…10 hours ago22 May 2022
Ed Walker 🍞🌹💉💉@MasaccioEWRT @Artemesia44: We have a SC that is almost entirely right wing Catholic and is trying to impose its Opus Dei, handmaiden cult views on th…10 hours ago22 May 2022
Jim White@JimWhiteGNVWe feast tonight! The butts cooked faster than expected., but will hold safely wrapped in foil and in a cooler unti… twitter.com/i/web/status/1…1 day ago21 May 2022
RayneToday@raynetodayRT @darth: i know this is completely unrelated but imagine spending nine fuckin hours with that guy2 days ago21 May 2022
Jim White@JimWhiteGNVWho’s ready for baseball at the end of the rainbow? pic.twitter.com/QWJZZK5LpC2 days ago20 May 2022
Jim White@JimWhiteGNVMore than fifty folks from the church are signed up to eat pulled pork in my back yard tomorrow evening. Fortunatel… twitter.com/i/web/status/1…2 days ago20 May 2022
RayneToday@raynetodayRT @wyatt_privilege: Not a mind blowing observation but the game now is to send crazy shit upstairs to scotus and invite them to remold, sc…4 days ago19 May 2022
RayneToday@raynetoday~ding-ding-ding~ Accurate. twitter.com/robinmarty/sta…4 days ago18 May 2022
Carrier Classic, Veterans, Lions and Huskers Trash Talk Jets, Pats & Other Pro Trash
Scroll to top