Marja Serves as Microcosm of Military Failure in Afghanistan, But Failure is Country-Wide 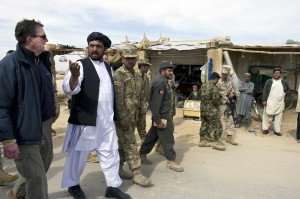 But even though we are supposed to believe the offensive worked in Marja and the Taliban were routed, there was this from DoD on actions from April 15 of this year:

A combined force detained several suspects while searching for a Taliban leader in the Nad-e Ali district of Helmand province. The leader oversees Taliban operations in the province’s Marjah district, including roadside-bomb and other attacks against Afghan and coalition forces. He also attempts to impose Taliban law on Afghan civilians.

Yup, despite our “success” in Marja, the Taliban still have a leader who “oversees Taliban operations” in the region, and he seems to be eluding capture even though we seem to know who he is.

And Marja was back in the news over the weekend, as the US base in Marja saw its second green on blue killing of the year (is this incident less isolated since it’s the second one here?) and a significant number of Taliban forces were killed in the region on Friday and Saturday.

Couple the Marja failure with other bad news coming from Afghanistan and we see just how the entire effort there is crashing into disarray.

We learned Saturday that the planned site for a US consulate in Mazar-e Sharif, in the north of Afghanistan (Marja is in the south) has now been abandoned (after signing a ten year lease and spending $80 million) because it is too risky to have a US presence there.

The leaders of the House and Senate intelligence committees said Sunday they believe that the Taliban has grown stronger since President Obama sent 33,000 more U.S. troops to Afghanistan in 2010.

The pessimistic report by Sen. Dianne Feinstein (D-Calif.) and Rep. Mike Rogers (R-Mich.) challenges Obama’s assessment last week in his visit to Kabul that the “tide had turned” and that “we broke the Taliban’s momentum.”

Feinstein and Rogers told CNN’s “State of the Union” that they aren’t so sure. The two recently returned from a fact-finding trip to the region, where they met with Afghan President Hamid Karzai.

“President Karzai believes that the Taliban will not come back. I’m not so sure,” Feinstein said. “The Taliban has a shadow system of governors in many provinces.”

When it comes to McChrystal’s government in a box, it seems that US likes to put the Afghans back in the box now and then. One of Obama’s claimed recent successes was the agreement handing over control of the prison system in Afghanistan, including the huge Parwan prison. It turns out, however, that the US has maintained the real decision-making power, and has completely bypassed Afghan authorities with its program of secretly releasing key insurgents through negotiations aimed at pacifying certain regions.

With only two weeks to go until the Chicago NATO summit, I expect the Obama administration and Department of Defense to completely ignore Feinstein and Rogers. They will insist their plans are still working and that no changes are needed for this summer’s “fighting season”. This is a huge gamble for Obama, as he does not want to enter the November election trying to defend a failed surge strategy. However, with even key members of Congress now openly disputing Obama’s claims, there is a strong possibility that the “success” narrative will have taken many more hits by November.