Trained in America; Clothed in China 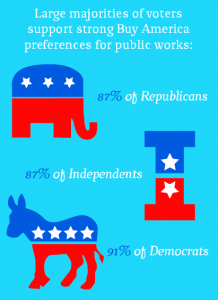 When ABC reported last week that the $1,400-$1,900+ uniforms Ralph Lauren won the contract to provide to Olympic athletes were made in China, Sherrod Brown not only pushed the US Olympic Committee to try to rectify the issue by the Winter 2014 Olympics, but he introduced a bill to require Federal uniforms to be made in the US (currently, they must be 51% US made).

But the news–which came out just before the Alliance for American Manufacturers released their yearly poll showing near unanimous support for what could be called an industrial policy to support US manufacturing–had a more interesting public relations effect.

For example, after CNN posted a list of US manufactured clothes in response to the uniform news, the sales of Lawson Nickol’s Ohio company, All American Clothing Company, skyrocketed to 14 times what they normally would be.

Brown had a conference call with Nickols (whose company is located outside of Dayton) and Youngstown native Nanette LePore (whose clothes are manufactured in the US, though of foreign–usually Italian–cloth) to talk about efforts to bring back clothing manufacture to the US.

Both make a profit–though not the same margins they’d make if they outsourced to China. LePore noted that Ralph Lauren spends his money on advertising rather than manufacturing. Nickols claimed his jeans last longer, which helps to offset the somewhat four times higher costs. But ultimately they were both sacrificing some profit to keep manufacturing close. For Nickols, it seems like a quality and patriotic issue. It’s patriotic for LePore, too, but manufacturing in midtown Manhattan also gives her much more direct control over her line.

And both mentioned things that would help bring clothing manufacturing back to the US–much of it pertaining to sourcing for lower cost runs.

At this point, we’re largely talking about symbolic gestures: Olympic uniforms, Federal uniforms, jeans made 6 hours away. But the underlying message seems to be (and AAM’s poll backs this up abstractly) that people will seek out things made in the US.