What Does Dunford’s Confirmation Hearing Tell Us About the Path Forward in Afghanistan? 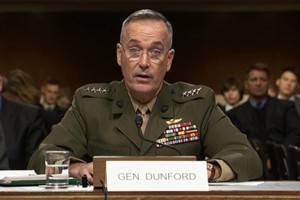 Dunford at the hearing.

Yesterday, both Marcy and I discussed significant events that could have a tremendous impact on what lies ahead for the role of the US in Afghanistan. Marcy found that for the first time, the Treasury Department has named a Taliban figure in Afghanistan as a narcotics trafficking drug kingpin. That means, as Marcy points out, that “We’ve got the Global War on Drugs in Afghanistan now” and could have cover for staying on indefinitely in order to cut the flow of drugs. I pointed out that the negotiations have just begun on developing a Status of Forces Agreement which will define the conditions under which US troops could remain in Afghanistan beyond the scheduled handover of security responsibility to the Afghans at the end of 2014. The US wants to keep a number of troops in place, but only if full legal immunity can be conferred on them. The US failed to achieve an immunity agreement in Iraq and subsequently withdrew all troops. With two years remaining before the handoff deadline, look for the negotiations to go very slowly.

Yesterday also saw the confirmation hearing for General Joseph Dunford, who has been nominated to replace General John Allen in charge of US and NATO troops in Afghanistan. The hearing had been scheduled jointly for Allen’s promotion as head of NATO, but his involvement in an email scandal with Jill Kelley has put that hearing on hold. I was unable to watch the hearing and the video archive of the hearing at the Senate Armed Services Committee website has not yet gone live. (I’ve also been unable to find a transcript. If anyone runs across one, please post the link in comments.)

One key issue revolves around what the recommendation will be for how fast troops should be drawn down leading up to the handoff of security responsibility at the end of 2014. Of course, as mentioned above, the not-yet-negotiated SOFA will dictate whether and how many troops will remain beyond that date, but there still is the strategic question of how quickly combat operations will be drawn down and whether that includes actual troop withdrawals.

Perhaps because Dunford was not nominated for the position until early October, we learned in the hearing that he has not been present during any meetings at which General Allen has been preparing his recommendation for the drawdown plan:

Gen. Joseph Dunford, President Obama’s pick to take command of the Afghanistan war within months, revealed in Senate testimony on Thursday that he has not been included in Gen. John Allen’s highly-anticipated war recommendations currently being deliberated in the White House and Pentagon.

Dunford, under pointed questioning by Sen. John McCain, R-Ariz., said he has been kept in the dark, during his confirmation hearing before the Armed Services Committee.

“Do you know what those recommendations are?” McCain asked.

“Sir, I have not been included in those conversations,” Dunford replied.

“Boy, that’s — that’s interesting to me,” McCain remarked. “The guy that’s going to take over the command has not even been included in those conversations. Do you feel prepared to assume these responsibilities?”

It appears to me that Dunford plans his own review and I would not be surprised if the Obama administration uses the change in leadership as an excuse to delay any decisions on the drawdown plan until Dunford’s recommendation has been completed. The Defense Department’s summary of the hearing included this on Dunford’s planned review:

If confirmed, Dunford said, he will evaluate current plans for drawing down the remaining 68,000 troops in Afghanistan. Weighing that against conditions on the ground and the Afghan national security forces’ capabilities, he said, he hopes to gauge exactly what type and size force the United States will need to meet its objectives.

“As I make a recommendation, I will look at the strength of the enemy,” he said. “I will look at the capabilities and capacities of the Afghan national security forces, judge the capability and capacity of the coalition forces and then make a recommendation on what our force contribution ought to be between now and 2014, and then beyond as we go into the decade of transformation.”

Dunford’s comments here, at least in the Defense Department write-up, appear in the overall context of the capabilities of the Afghan National Security Forces. Training and capability of this force has been one of my major focus areas, so of course I want to take a careful look at what Dunford says here:

Reporting on his recent visit to Afghanistan, Dunford said he was impressed by the impact of NATO Training Mission Afghanistan in developing the Afghan national security forces. “I really believe over the last 18 months that their performance has significantly improved as a result of the training being provided by NTMA,” he said.

The timeline for growing the force to 352,000 members has slipped slightly, but the general said all the troops have been recruited and many trained. “My expectation, based on my recent visit, is that training will be completed by early 2013,” he said.

Dunford said he found the transformation among these troops encouraging, noting that they now provide security for 76 percent of all Afghans. “We have actually had corps-level operations in Regional Command South, planned and executed by the Afghans alone,” he said. “From my perspective today, the Afghans have the capability, with the support we are providing, to provide security.”

With this progress, and continued coalition support, “I believe the Afghan national security forces will be able to meet the security requirements in Afghanistan,” he said.

There is a very interesting, but subtle, change from the DoD’s previous statements on ANSF training here. Dunford now is distinguishing between forces merely being recruited and being fully trained. Dunford says that recruiting for a force size of 352,000 has been completed but that the timetable for them being full members of the force, and fully trained, “has slipped slightly”. What doesn’t appear here is any reference to the massive outbreak of green on blue killings that disrupted the training process completely. I have stated many times that I expect this training disruption, and the accompanying re-screening of recruits, to eventually result in the 352,000 force size to be reduced greatly, perhaps to as low as 250,000, simply because there is no way that the larger figure can be achieved in a “fully trained” status, even with the way DoD games the description of training.

Finally, as Spencer Ackerman pointed out, Dunford’s remarks come from a basic position that the US is more or less never going to leave Afghanistan:

During his confirmation hearing to take command in Kabul, Marine Gen. Joseph Dunford told the Senate Armed Services Committee on Thursday that the U.S. needs to present a “clear and compelling narrative of commitment” to Afghanistan, beyond the 2014 timeframe for turning over security to the Afghans. Step one is to negotiate the contours of a post-2014 U.S. force in Afghanistan, to “create momentum for that narrative that I was alluding to.”

Ackerman points out how the Obama administration has made many public claims that the US will be getting out of Afghanistan at the end of 2014. Could Dunford wind up getting his wish to stay on long beyond that deadline? Well, there is precedent for generals manipulating Obama to get what they want. Here’s Michael Hastings on Petraeus getting his Afghanistan surge:

Petraeus was so convincing on Baghdad that he manipulated President Obama into trying the same thing in Kabul. In Afghanistan, he first underhandedly pushed the White House into escalating the war in September 2009 (calling up columnists to “box” the president in) and waged a full-on leak campaign to undermine the White House policy process. Petraeus famously warned his staff that the White House was “fucking” with the wrong guy.

Stay tuned. The fight for whether and how long we will keep fighting in Afghanistan is just getting started. At least Ackerman found that some who usually favor any war they can get may be finally getting their fill:

Senators on the panel did not sound convinced. A frustrated Sen. John McCain (R-Ariz.), one of the war’s biggest congressional supporters, called Dunford a “blank slate” and made the surprising statement that if the U.S. “can’t accomplish the mission, I’m not sure why we should stay.” Sen. Susan Collins (R-Maine) said the “lack of progress [and] the surge in insider attacks paint a rather bleak picture.” Sen. Lindsey Graham (R-S.C.) mused about cutting off funding for the war if the U.S. withdraws too many troops to perform the residual missions Dunford outline. The panel’s chairman, Sen. Carl Levin (D-Mich.), however, encouraged Dunford to “present the positives” in Afghanistan and swiped at the media for emphasizing the negatives.