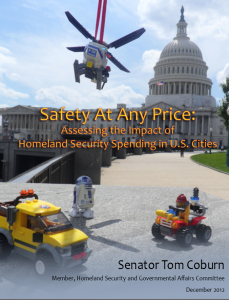 I tell you, if Tom Coburn just stuck to shutting down the most egregious Homeland Security fearmongering boondoggle abuses rather than shutting down government itself, I might grow to love the man.

His latest effort (for which some of his staffers appear to have staged a very fun photo shoot) takes on the stupid things localities bought under the $7.1 billion Urban Area Security Initiative, which was originally intended to help likely terrorist targets (like NYC) prepare against an attack, but which turned into a big boondoggle for towns unlikely to be targeted.

The describes how Keene, NH (home of the Free State Project) tried to use a grant to buy its 40-cop police department–which has faced just one murder in the last two years–an armored vehicle to protect its annual pumpkin festival. Keene was not alone; the report has several pages dedicated to the graft Lenco Armored Vehicles has been conducting selling governments in Waukesha, WI and Santa Barbara, Carlsbad, Escondido, and Fontana, CA BearCats they have no need for using sole source bids.

The report attacks Pittsburgh for having bought an LRAD–which it used during the G-20–as “a kinder and gentler way to get people to leave.” It also describes how San Diego County used an LRAD to protect a speaking event with Darrell Issa, Duncan Hunter, and Susan Davis. 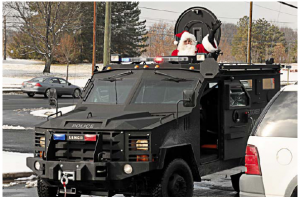 But the centerpiece of the report is the description of how first responders used grant money to attend a training session in a San Diego resort at which they were entertained by a Zombie Apocalypse simulation billed as “a very real exercise, this is not some type of big costume party.”

One notable training-related event that was deemed an allowable expense by DHS was the HALO Counter-Terrorism Summit 2012. Held at the Paradise Point Resort & Spa on an island outside San Diego, the 5-day summit was deemed an allowable expense by DHS, permitting first responders to use grant funds for the $1,000 entrance fee. Event organizers described the location for the training event as an island paradise: “the exotic beauty and lush grandeur of this unique island setting that creates a perfect backdrop for the HALO Counter-Terrorism Summit.

The marquee event over the summit, however, was its highly-promoted “zombie apocalypse” demonstration. Strategic Operations, a tactical training firm, was hired to put on a “zombie-driven show” designed to simulate a real-life terrorism event.92 The firm performed two shows on Halloween, which featured 40 actors dressed as zombies getting gunned down by a military tactical unit. Conference attendees were invited to watch the shows as part of their education in emergency response training. Barker explained that, “the idea is to challenge authorities as they respond to extreme medical situations where people become crazed and violent, creating widespread fear and disorder.”93

According to the firm’s public relations manager, the exercise was brought about “utilizing Hollywood magic,” and setup in a “parking lot-sized movie set [with] state-of-the-art structures, pyrotechnic battlefield effects, medical special effects, vehicles and blank-firing weapons.”94 Barker added, however, “”This is a very real exercise, this is not some type of big costume party.”95

The report also criticizes the way cities scramble to define themselves as high risk, focusing particularly on Thousand Oaks-Oxnard, but also calling out his own state’s Tulsa for its recent UASI grants.

As per usual, DHS can’t justify much of this spending. Of particular interest, however, the report reveals that FEMA refused to give Coburn’s staffers data on how cities were defined as risks under the Bush Administration.

A fuller explanation of the reasoning for including 14 new jurisdictions in FY2008 was not given, however, and the risk scores for the FY2004-FY2008 DHS uses to award funds is neither public nor was it made available to staff upon request.69

And the whole report is prefaced by some very sound remarks about security.

The balancing act between liberty and security has been tenuous throughout the history of our nation, founded upon basic freedoms granted by our Creator and protected from government infringement within the Bill of Rights of our Constitution. But a new element has been added to this equation over the past decade that threatens to undermine both our liberty and security— excessive government spending and insurmountable debt.

Yeah, Coburn is being a fiscal miser. But in this case, he’s absolutely right: this pork does nothing to keep us safe, it militarizes totally safe cities, and makes a bunch of corrupt contractors rich in the process.