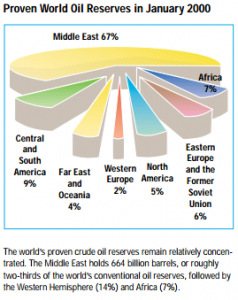 See Juan Cole and Tomas Young (who will shortly die from wounds suffered in the Iraq War) for an accounting of that cost.

But there has been far too little accounting of the cost of Dick Cheney’s strategic choices.

Dick Cheney spent the first several months of the Bush Administration assessing where the US would get its energy in future years and how that would sustain our hegemonic role in the world. In his autobiographical novel, published in 2011, he had this to say about his Energy Task Force.

The report is one I am very proud of. I commend it to anyone looking to understand America’s energy challenges still today.

The environmental groups that criticized the report are all too often, in my experience, opposed to any increase in the production of conventional sources of energy. They don’t want to drill anyplace. They don’t want to mine coal anyplace. They seem to believe we can depend on alternative sources of energy, such as solar or wind. It’s my view — and it’s the view reflected in the report — that while we should develop alternative sources, in the final analysis, we can’t effectively address our energy problems in the near term nor can we remain competitive in the global economy unless we also produce more energy from conventional, domestic sources.

Right now, none of the alternative sources of energy can compete economically with petroleum and coal and other conventional sources. It’s also the case that time and time again, we have found that developing alternative sources has undesirable, unanticipated consequences. The push for ethanol fuel produced from corn, for example, resulted in driving the price of a bushel of corn up significantly. This had a huge impact on people who used corn for purposes other than fuel — purposes that weren’t subsidized. Cattleman, for example, were suddenly faced with significantly higher feed prices. [my emphasis]

While Cheney’s report did have a chapter on “Nature’s Power,” (which is not, interestingly, one of the two he accused critics of having not read), just one paragraph on any alternative source of power but hydropower shows up on the chapter on “Energy for a New Century.”

Never mind that Cheney’s understanding of the competitiveness of alternatives by 2011, particularly with coal, which the report boosted aggressively, was badly mistaken.

He argued in 2011 — 10 years after 9/11 and 7 years after the Iraq War had descended into a clusterfuck — that alternative energy has some nasty unintended consequences (he might have a point if he talked about how Ethanol contributed to increase food insecurity for actual human beings, which contributes to political instability, but apparently he sees feeding Americans cheap grain fed beef to be a higher priority).

And of course, the nasty unintended consequence that is climate change did not show up in this discussion in the least.

On May 16, 2001, Dick Cheney released a report declaring (based partly on a shortage in CA artificially caused by Enron) an energy crisis, and proposing recommendations to bring more fossil fuels online quickly, as well as nuclear power.

America in the year 2001 faces the most serious energy shortage since the oil embargoes of the 1970s.

This imbalance, if allowed to continue, will inevitably undermine our economy, our standard of living, and our national security.

Present trends are not encouraging, but they are not immutable. They are among today’s most urgent challenges, and well within our power to overcome. Our country has met many great tests. Some have imposed extreme hardship and sacrifice. Others have demanded only resolve, ingenuity, and clar­ ity of purpose. Such is the case with energy today.

We submit these recommendations with optimism. We believe that the tasks ahead, while great, are achievable. The en­ergy crisis is a call to put to good use the re­sources around us, and the talents within us. It summons the best of America, and offers the best of rewards – in new jobs, a healthier environment, a stronger economy, and a brighter future for our people.

Four months later, 19 Arabs, 15 of whom were Saudis, destroyed the World Trade Center and damaged the Pentagon. All of them were motivated, in part, by America’s increasing presence in the Middle East.

The Bush Administration would suppress a good deal of evidence showing that not just those 15 Saudi hijackers but some highly placed members of the Saudi elite had ties to the attack. And while occasionally Bush Administration figures would suggest the Iraq War would enable Iraq to serve as a counterpoint to the Saudis and their ties to terror, the real reason was oil.

We went to war in Iraq because long before Bush won office, Cheney and his friends decided the US needed to put Iraqi production in hands more amenable to American wishes. And that unexamined decision prevented Cheney from seeing just how short-sighted such a policy would be.

In the decade since Dick Cheney decided to go to war in Iraq because renewable resources were too expensive and had some nasty unintended consequences, the US has spent $2 trillion on that war. Along the way, we have created an entire generation of new enemies, partly because of the incompetence and arrogance with which the war was waged.

We remain as reliant on our Saudi allies as we were at the start of the Iraq War.

That’s true, in part, because our foreign policy continues to be dominated by dangerous plans — this time, some way to put Iranian oil resources in friendlier hands — to get more oil.

And throughout the 12 years since Cheney’s energy report, throughout the 10 years since he decided to go to war against Iraq rather than invest all that treasure into more effective solutions, we have been inching closer and closer to the tipping point at which climate change will spiral out of control.

Cheney was absolutely right to reevaluate where and how the US gets its energy in 2001. But he came to all the wrong conclusions from that reevaluation, and he pursued the worst possible strategy to deal with it.

He bears utmost responsibility for all the lives wasted. But he also needs to be held responsible for the opportunities wasted as well.