The CNET “Bombshell” and the Four Surveillance Programs 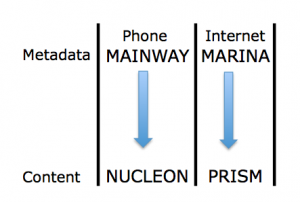 Thus, we are effectively just talking about two programs, and not two that intersect via targeted technology, as MAINWAY would with NUCLEON and MARINA with PRISM. So, while there are a slew of other possibilities for what Mueller might mean by “another question,” one big one is “how may an analyst access NUCLEON information if she had MAINWAY data”?

And, as Sanchez notes in his piece, the way 702 is supposed to work (and indeed, would have to work for the claims made about PRISM’s role in thwarting the Najibullah Zazi attack to be remotely true) is that US person information comes up along with targeted foreign targets. Indeed, as I noted last year during the FISA Amendments Act debate, in an effort to defeat this amendment prohibiting effectively what Sanchez has laid out, Sheldon Whitehouse said that getting US content without a warrant was the entire point.

He referred back to his time using warrants as a US Attorney, and said that requiring a warrant to access the US person communication would “kill this program,” and that to think warrants “fundamentally misapprehends the way in which this program operates.”

The possibility that the government would do this kind of thing has been raised repeatedly since Russ Feingold did so in 2009 during the FISA Amendments Act debates, speaking specifically about the content of calls to people overseas.

It may be that, discussed in isolation, the government can avoid talking about what Feingold and Wyden and others have called a backdoor. Which is probably why they don’t want us to “confuse” (that is, understand the relationship between) the business records and content access.