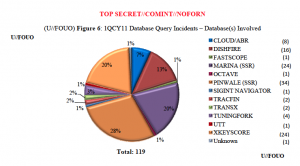 Update: as Mindrayge notes, Marina appears in NSA slides as Internet, not phone metadata (and that’s how Ambinder refers to it here). There are some oddities, then, but I am changing this post accordingly.

As I noted in this post, the May 3, 2012 audit of NSA’s violations falsely suggests “roamer” problems were the cause of an increase in incidents, rather than database query errors, transit collection, and detask problems.

Database query errors are basically when an analyst collects too much data because she doesn’t exclude data that should be excluded, she ran a query believing it was appropriate because she had too little information on it, or she ignored standard operating procedures.

In other words, a fifth of the database query errors in the first quarter of 2012 were on the US  Internet record dragnet database — the one the government has been claiming is so carefully guarded.

[If Mainway is just Internet metadata, then we don’t know the number of queries.]

Update: LAT’s Ken Dilanian, who listened to a conference call NSA just had, just tweeted this:

NSA’s DeLong will not say how often NSA makes privacy errors when it queries US phone records database. But less than 30%, he says.

Less than 30%?!?!? That suggests it is probably far higher than even I imagined. Even if it was 8% it would be unacceptably high. But if it’s at the higher end of the possible range, it is unbelievably high.

Update: Ron Wyden and Mark Udall have issued a statement on this. Among other statements, they emphasize that Americans need to know about the phone and Internet dragnet violations.

Americans should know that this confirmation is just the tip of a larger iceberg.

In particular, we believe the public deserves to know more about the violations of the secret court orders that have authorized the bulk collection of Americans’ phone and email records under the USA PATRIOT Act.

Given the potential numbers of phone dragnet violations, I should say so.