Why Did DoD Wait Over Three Months to Issue Records Preservation Order After SIGAR Request? 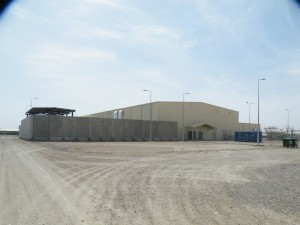 The $34 million building without a use. (SIGAR photo)

Back in July of last year, SIGAR issued an alert (pdf) regarding what SIGAR head John Sopko termed “a potentially troubling example of waste that requires your immediate attention”. That statement was in Sopko’s cover letter to Defense Secretary Chuck Hagel, Head of Central Command Lloyd Austin and ISAF Commander Joseph Dunford. It would appear that the folks in the Department of Defense missed that key word “immediate”, as the subsequent responses from the Defense Department have been both troubling and, at least on the most important move, slow.

First, to set the stage on the evidence of wasteful spending in constructing a building that had no use at Camp Leatherneck in Helmand province. From the alert letter linked above:

I was told by senior U.S. military officials that the recently completed Regional Command-Southwest (RC-SW) Command and Control Facility, a 64,000 square feet building and related infrastructure with a contract award value of $34 million that was meant to serve as a command headquarters in Helmand to support the surge, will not be occupied. Based on documents provided to SIGAR, it appears that military commanders in Afghanistan determined as early as May 2010 that there was no need for the facility, yet the military still moved ahead with the construction project and continued to purchase equipment and make various improvements to the building in early 2013. Based on these preliminary findings, I am deeply troubled that the military may have spent taxpayer funds on a construction project that should have been stopped.

In addition, I was told that U.S. military officials expect that the building will be either demolished or turned over to the Afghan government as our military presence in Afghanistan declines and Camp Leatherneck is reduced in size. Both alternatives for how to resolve this issue are troubling—destroying a never-occupied and never-used building or turning over what may be a “white elephant” to the Afghan government that it may not have the capacity to sustain. Determining all of the facts on how we reached this $34 million dilemma and what can be done to prevent it from happening again is the reason for sending this management alert letter to you.

Even though the Camp Leatherneck Commander determined in May, 2010 that the building was not needed, construction began anyhow after February of 2011. Ironically, Sopko notes in his letter that this may well be the best-constructed building he has toured in his many inspections in Afghanistan, even though it was known before construction began that there would be no use for the building.

Sopko’s letter continues, citing information collected that the building can accomodate 1200 to 1500 staff but that at the time of writing, only 450 people were available to use it. Furthermore, there was nobody on the base qualified to maintain the expensive HVAC system. But it gets even worse:

According to a senior U.S. military official, as the footprint of Camp Leatherneck decreases, the building could be outside the security perimeter, thereby making it unsafe for the U.S. military to occupy it. This leaves the military with two primary options—demolish the building or give it to the Afghan government.

However, to make it usable for the Afghan government, the building would require a major overhaul of existing systems, including the expensive heating, ventilation, and air conditioning systems. A high-ranking, senior U.S. military official also advised me that the facility was built to U.S. construction standards rather than Afghan standards. For example, the power runs at U.S. 60 cycles versus Afghan 50 cycles and U.S. 120 volts versus Afghan 220 volts. Therefore, it would not be easy to transfer the building to the Afghan government. These were some of the reasons why the U.S. military officials we spoke with believe the building will probably be demolished.

It appears that the Defense Department reacted to Sopko’s letter, because Sopko states in a subsequent letter that he was informed that an investigation was underway and that his questions would be answered. But that process seems to have directly contradicted earlier work from DoD. Sopko wrote a new letter (pdf) to the same recipients on November 27 of last year:

In my letter dated July 8, 2013, I requested information about the unoccupied 64,000 square foot building at Camp Leatherneck originally intended to serve as a command headquarters in support of the troop surge in Helmand Province. Nearly five months later, I have yet to receive a formal response to my questions.

Following delivery of my July letter, I was advised that an investigation into the facts and circumstances surrounding construction of the building was ongoing, and upon its completion answers to my questions would be forthcoming. Accordingly, I delayed my investigation of this matter assuming a speedy and fulsome review by your staff.
While I still have not received a response to the questions posed in my July letter, I have received the results of your most recent Army Regulation (AR) 15-6 investigation of the 64,000 square foot building, signed by Major General James M. Richardson, Deputy Commander-Support, U.S. Forces-Afghanistan (USFOR-A). Unfortunately, Gen. Richardson’s report raises additional questions, and has prompted my decision to restart SIGAR’s investigation.

Gen. Richardson’s report does not respond to my initial inquiry, nor does it fully address the issues associated with the 64,000 square foot building. On November 14, 2013, DOD’s Director of Congressional Investigations emailed a partial copy of Gen. Richardson’s report to my staff. This copy does not include the numerous exhibits and enclosures referenced in the report, lacks transparency, contains a number of unsupported statements, and fails to adequately explain its key findings and recommendations. Frankly, this does not instill confidence that a thorough and candid review was conducted of this matter.

In addition, Gen. Richardson’s report fails to address the underlying conditions that resulted in the construction ofthis $36 million building that apparently no one wanted or needed. Without identifying and correcting these deficiencies it is almost certain that similar wastes of taxpayer dollars will occur.

But the real kicker is that DoD had prepared an AR 15-6 report just a few months earlier (and just prior to Sopko’s July 2013 letter) that came to the exact opposite conclusion:

My concerns are magnified by the Army’s conflicting reports on this building. The Army’s first AR 15-6 investigation (in May 2013) found that the building was neither wanted or needed, and suggested that it could be converted to a gymnasium and movie theatre so that it would not be a total loss. Now, only six months later, Gen. Richardson’s new AR 15-6 investigation finds that it was needed after all, and recommends that more money be spent to complete the building and that someone should be ordered to “occupy and use [it] for its original purpose.”

Sopko was obviously concerned by such a strange and rapid change in position by DoD concerning the building. It seems especially suspicious to me that they would reverse themselves seemingly in response to questions being asked. Perhaps that occurred to Sopko, as well, as his letter contains a new series of questions relating both to the decisions to build the building and to how the subsequent AR-15-6 reports were generated. His letter also contains this very important request:

To aid our investigation, please take immediate action to retain and preserve all records, including documents, information, and data stored electronically or otherwise, related to issues surrounding the planning and construction of this building, as well as all records related to the May 2013 AR 15-6 investigation and the AR 15-6 investigation conducted by General Richardson. I also request that you direct all DOD active duty, civilian, and contractor employees not to delete or alter any such records. This request includes all pre-decisional material and applies to both on- and off-site computer systems and removable electronic media.

There is very interesting reading further down in the pdf file containing Sopko’s November 2013 letter. Immediately after the letter, we get a very useful timeline of events (hooray for timelines!). But after the timeline is the most interesting reading yet. DoD, via its Office of General Counsel has issued a memorandum that calls for preservation of records in this investigation. Great, you say, they responded positively to Sopko’s request for record preservation. The problem, though, is that this notice for preservation of records is dated March 17, 2014, more than three months after Sopko’s November 27, 2013 request.

I wonder how many documents or other records conveniently were misplaced or destroyed during those three months. Of course, the cynic in me worries that ending the period for which documents have to be preserved at the November 27, 2013 date of Sopko’s letter exempts documents generated as part of DoD’s response plan, but the dates covered by the records preservation notice are sufficient to address the concerns that SIGAR has identified if those records still exist.

[Aside: I was at first concerned about the date on the records preservation notice memo being stamped, but it appears after further investigation that multiple government entities use such a format for documents that may have taken some time  for which multiple sign-offs are needed before they become effective. See, for example, this NOAA document (pdf). I have also confirmed on background with SIGAR that they received the document electronically and the stamp is not receipt date stamp they generated.]

I will keep an eye out for further developments on this investigation.