It has now been five days since we learned that Thomas Duncan, who came to Dallas from Liberia, tested positive for Ebola. His condition has been downgraded to critical, but so far none of his contacts have come down with Ebola symptoms. Because those most likely to have been infected by him are now under close observation and have limited contact with others, it seems quite likely the disease will not spread in the US beyond the small handful of people under close monitoring.

By contrast, the US is in the midst of an ongoing outbreak of a virus that has put many children into intensive care units with severe respiratory illnesses. A handful of children in Colorado initially having respiratory illness have progressed to paralysis of some limbs and have tested positive for the virus. Four children who died from severe respiratory illness have tested positive for the virus but the CDC states that the role of the virus in these deaths is not yet known. Late yesterday, a medical examiner in New Jersey stated that the virus was the cause of death for a four year old boy.

These are some of the smallest and simplest viruses known. The viral particle contains only a single piece of RNA. Inside the host cell, this RNA is turned into a single protein that then is capable of chopping itself into the four smaller proteins found on the viral coat. There is no membrane around the virus and the particles are stable at acid pH, so inactivation is best achieved with bleach or other disinfectants whose label say they are active against non-enveloped viruses.

From mid-August to October 3, 2014, CDC or state public health laboratories have confirmed a total of 538 people in 43 states and the District of Columbia with respiratory illness caused by EV-D68.

EV-D68 has been detected in specimens from four* patients who died and had samples submitted for testing. The role that EV-D68 infection played in these deaths is unclear at this time; state and local health departments are continuing to investigate.

The difficulty for healthcare providers with this virus is that symptoms for those infected can range from very mild to severe. As also seen with poliovirus, only a small fraction of those infected get the most severe form of the disease. In the current outbreak, a very high proportion of the children with the worst respiratory symptoms already suffered from asthma:

Of the 19 patients from Kansas City in whom EV-D68 was confirmed, 10 (53%) were male, and ages ranged from 6 weeks to 16 years (median = 4 years). Thirteen patients (68%) had a previous history of asthma or wheezing, and six patients (32%) had no underlying respiratory illness.

Of the 11 patients from Chicago in whom EV-D68 was confirmed, nine patients were female, and ages ranged from 20 months to 15 years (median = 5 years). Eight patients (73%) had a previous history of asthma or wheezing.

Parents and school administrators are being encouraged to monitor children with asthma more closely during this outbreak and to be especially vigilant about measures to prevent spread.

Transmission of the virus, according to CDC:

You can get exposed to the virus by—

If you then touch your eyes, nose, or mouth before washing your hands, you can get infected with the virus and become sick. 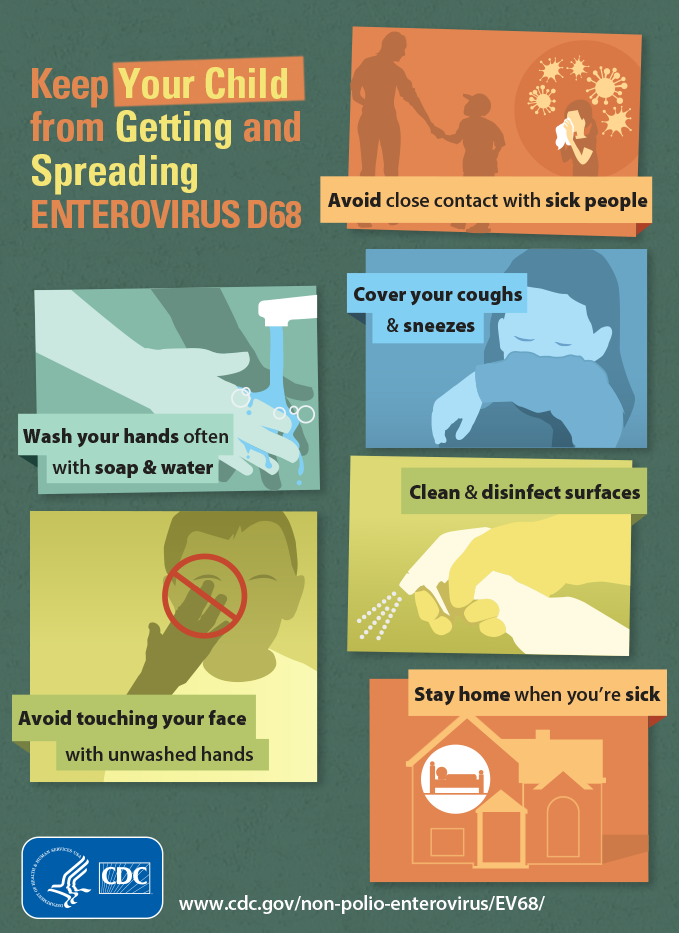 Of special concern is the outbreak of paralysis among children affected by the virus. From CNN last week:

Health officials are looking for the cause of a neurologic illness that’s affected 10 children in Colorado.

The children were hospitalized between August 9 and September 28 with muscle weakness in their limbs, according to the Centers for Disease Control and Prevention.

Something is affecting the children’s motor nerves, causing weakness primarily in their shoulders, triceps, biceps and hips, says Dr. Joyce Oleszek, a pediatric rehabilitation specialist at Children’s Hospital Colorado. Doctors are also seeing some weakness in the neck and facial muscles in these patients.

“It seems to be attacking the spinal cord and brain stem,” Oleszek said at a press conference Monday.

Tests of the children’s cerebrospinal fluid came back negative for enteroviruses and West Nile virus. But a test of their nasal passages found enterovirus in six out of eight patients who were tested.

The CNN story also notes that five similar cases were seen in California between August 2012 and July 2013.

While health officials are watching asthma patients particularly closely for the worst respiratory effects of this virus, it should be noted that only two of the ten paralysis patients in Colorado had a history of asthma, so even though these children reported respiratory infections an average of a week before the onset of neurological symptoms, asthma history does not single out the patients at risk for neurological complications.

As with most virus infections, there are no known treatments for this virus and a vaccine has not been developed. That means that information from CDC about preventing exposure is relatively generic, as also seen in the graphic above.

Finally, there is a very interesting set of contrasts between Ebola and enteroviruses. Note from the information above that infection with enteroviruses is quite widespread and most cases are believed to be asymptomatic or to have only very mild symptoms. In contrast, Ebola patients almost all get extremely ill and a very high fraction of them die. Ebola, however, doesn’t spread nearly as easily as enteroviruses. This graphic from NPR illustrates that on average, one Ebola patient only infects two more patients while most other viral diseases result in more infections per infected person. We don’t have information on the number of others infected by each person infected with Enterovirus D68, but the closely related polioviruses produce 5 to 7 new infections resulting from each infected person.