The Sterling Closing Arguments: Who Is the Hero, Who Is the Storyteller? 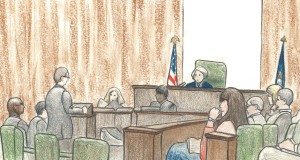 “They are patriots,” prosecutor Jim Trump ended his remarks, speaking of the many CIA officers the jury had heard from. “They do their work without accolades.” He then compared Sterling with those patriots. “Sterling is not a patriot,” he described after accusing Sterling of betraying the CIA and his colleagues. “He is the defendant, he is guilty.”

Defense attorney Barry Pollack spoke in different terms — of the government’s insurmountable burden to present actual evidence that Jeffrey Sterling leaked national defense information to James Risen. Pollack warned of what a tragedy it would have been had the jury used the circumstantial evidence, presented by the government, that the word “Merlin” appeared on a computer Sterling used for 2 years to convict Sterling, when it turns out the word probably got there from its prior owner’s review of a piece of software called Merlin. “It would have been a tragedy” had the jury convicted Sterling based on that evidence, Pollack ended his presentation.

But along the way Pollack reminded whose story this is: James Risen’s, not Jeffrey Sterling’s, and the choices about how he presented Sterling, Bob S, and Merlin were made by him. The government, which pursued Risen’s testimony for 9 years, today presented the reporter as a mere vehicle for Jeffrey Sterling, a non-entity. Of course, no mention was made of Risen’s clear argument, in both the chapter (which the jurors will read) and the rest of the book (which jurors cannot read) that there were real reasons to be worried about CIA’s actions with respect to WMDs in both 2003 and still in 2006.

The government did a lot of good for their case in their closing arguments. Prior to today, their case was a mess, with their last witness, FBI Agent Ashley Hunt, admitting she had not even tried to gather evidence from some of the other possible sources for Risen, and had not succeeded for others. Olshan’s focus on citations from Sterling’s performance review was particularly compelling that Sterling had a role — albeit one that might have involved sharing entirely unclassified information — in Risen’s story.

Pollack did his best work pointing out that the evidence in CIA cables — particularly the timeline of meetings just before Merlin went to Vienna — suggested Merlin’s explanation for how a key letter appeared in Risen’s book did not make any sense. “There’s one problem [with Merlin’s story],” Pollack claimed. “It’s not true.” CIA cables showed that Merlin had not met alone with Sterling at the time he claimed he had, so it was impossible for Sterling to have gotten a copy of the letter in the way Merlin claimed he had. Pollack also took the government’s own narrative of Sterling’s calls with Risen, and showed where they had omitted the events in Sterling’s long-running equal opportunity and publication fights with the CIA, a perfectly innocent explanation for his calls with Risen.

There was almost no room in either story for challenging these narratives of heroism and betrayal. After all, if nuclear weapons are as serious as Olshan reminded the jury they are, then perhaps the concern about giving nuclear blueprints to Iran was itself a grave concern. Perhaps whoever leaked this story to James Risen as the country went to war in the name of WMDs that didn’t exist was him- or herself a hero. That was not submitted to the jury as a possibility.

Ultimately, though, it will come down to the story the jurors themselves craft to explain how a chapter that adopts a strong narrative voice — Risen’s voice — came to be, and whether they believe the government has presented enough evidence to prove Sterling was one of the many characters in the story of how investigative reporter James Risen publicized what the government claims was one of its closest held secrets.

Before this close, I would have guessed that there was no way the jury would find Sterling guilty; the government simply had not presented any evidence. It’s not clear their evidence is any more sound now, but they have told a story that may well resonate with the jury.