What Was the Anthrax Attack Targeting Patrick Leahy Doing in the Iraq NIE? 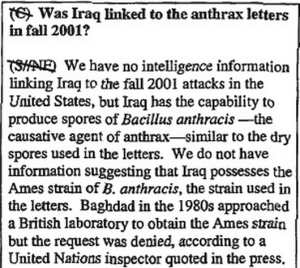 As Jason Leopold reports, the government recently released a newly declassified version of the 2002 NIE that justified the war with Iraq to Black Vault’s John Greenwald. Leopold has a useful overview of what the report includes. But I’m most appalled by this.

The NIE also restores another previously unknown piece of “intelligence”: a suggestion that Iraq was possibly behind the letters laced with anthrax sent to news organizations and senators Tom Daschle and Patrick Leahy a week after the 9/11 attacks. The attacks killed five people and sickened 17 others.

“We have no intelligence information linking Iraq to the fall 2001 attacks in the United States, but Iraq has the capability to produce spores of Bacillus anthracis — the causative agent of anthrax — similar to the dry spores used in the letters,” the NIE said. “The spores found in the Daschle and Leahy letters are highly purified, probably requiring a high level of skill and expertise in working with bacterial spores. Iraqi scientists could have such expertise,” although samples of a biological agent Iraq was known to have used as an anthrax simulant “were not as pure as the anthrax spores in the letters.”

Perhaps the inset discussing the US-developed anthrax used to attack two Senators and members of the media purports to respond to questions raised by anonymous sources leaking the previous year. But it basically does nothing but suggest the possibility Iraq might have launched the attack, even while providing one after another piece of evidence showing why that was all but impossible.

Moreover, by the time this NIE was completed in October 2002, that deliberate leak had been silent for a almost a year.

That the rumor appeared again, secretly, in the Iraq NIE really ought to raise questions about a whole slew of unanswered questions about the anthrax attack: about why Judy Miller got fake anthrax, about why the FBI scoped its investigation to find only lone wolves and therefore not to find any conspirators (and still almost certainly hasn’t found the culprit), about why the first person framed for the attack also happened to be someone who knew of efforts to reverse engineer Iraq’s purported bioweapon labs.

No. No, Iraq wasn’t linked to the anthrax letters in fall 2001. It’s a simple answer. But nevertheless, the question got treated as a serious possibility when Bush Administration was trying to drum up war against Iraq.