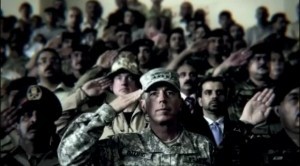 Never forget the ass-kissing little chickenshit who has been the driving force for most of the failed training of Iraqi troops.

In today’s New York Times, Rod Nordland speaks to a number of US troops currently deployed to Iraq yet again to train Iraqi troops. Shockingly, Nordland comes very close to explaining that the current deployment is likely to be meaningless since the repeated failures of earlier training make it likely that the current round of training also is likely to fail:

The current, woeful state of the Iraqi military raises the question not so much of whether the Americans left too soon, but whether a new round of deployments for training will have any more effect than the last.

The catastrophic demise of Iraq’s forces is staggering with the numbers Nordland presents. At its peak, the Iraqi military numbered 280,000. And yet once ISIS advanced, the melting away of multiple whole divisions of troops whittled Iraq down to a force that perhaps was as low as only 50,000. This current training effort, being carried out by 3000 US forces, is expected to add, at best, 30,000 Iraqi troops. Nordland admits, however, that the number is likely to be “far fewer”. Despite this depressing math, Nordland doesn’t get around to pointing out just how little impact such a small increase in Iraqi forces is likely to have even if their training somehow turned out to be successful.

But don’t despair. Our intrepid Speaker of the House is on duty to make sure that we continue repeating our training failures:

Boehner blamed “artificial constraints” on the 4,500 American trainers and advisers to the Iraqi army, suggesting that a slight increase in U.S. troops could occur if the Pentagon’s commanders suggested they were needed to help direct fighting against Islamic State forces. “They’re only there to train and advise the Iraqi army, and the fact is it’s just that – training and advising,” he said, dismissing fears that his proposal would lead to tens of thousands of additional U.S. troops locked in another bloody ground war.

“There’s more that we can do, with limited risk, and it wouldn’t require that many more people,” the speaker said.

“Please,” Boehner seems to be saying, “Let’s get back to a full war in Iraq, but without calling it war.” Presumably because the last one worked out so well.

Postscript: Marcy has been the one tracking maneuvers around the issue of an AUMF (even as recently as yesterday), but the Boehner quote above comes from a larger article about a possible new Iraq AUMF. Boehner is fighting Obama’s proposed AUMF. But he’s fighting it because he doesn’t want Obama to give back some of the unlimited war powers of the Executive:

“Until the president gets serious about fighting the fight, until he has a strategy that makes sense, there’s no reason for us to give him less authority than what he has today, which is what he’s asking for,” Boehner told a group of reporters Tuesday, following his trip with lawmakers to several Middle East hot spots during the congressional recess.

Take that, Mr. President. We won’t give you authority for this war until you ask for even more unfettered power than we already grant you!