He repeated the claim that the AP also idiotically parroted uncritically — that the government can only get three years of records for the culprits in the San Bernardino attack.

In the case of these individuals that conducted this attack, we cannot see any phone records for the first three years in which — you can only see them up to three years. You’ll not be able to see the full five-year picture.

Again, he’s ignoring the AT&T backbone records that cover virtually all of Syed Rizwan Farook’s 28-year life that are available, that 215 phone dragnet could never have covered Tashfeen Malik’s time in Pakistan and Saudi Arabia, and that EO 12333 collection not only would cover Malik’s time before she came to the US, but would also include Farook’s international calls going back well over 5 years.

So he’s either an idiot or he’s lying on that point.

I’m more interested in what he said before that, because he appears to have leaked a classified detail about the ongoing USA Freedom dragnet: that they’ve been issuing orders to a “large and significant number of companies” under the new dragnet.

There are large and significant number of companies that either said, we are not going to collect records at all, we’re not going to have any records if you come asking for them, or we’re only going to keep them on average of 18 months. When the intelligence community or law enforcement comes knocking and subpoenas those records, in many cases there won’t be any records because some of these companies already said they’re not going to hold these records. And the result is that we will not be able in many cases to put together the full puzzle, the full picture of some of these individuals.

Let me clear: I’m certain this fact, that the IC has been asking for records from “a large number of companies,” is classified. For a guy trying to run for President as an uber-hawk, leaking such details (especially in appearance where he calls cleared people who leak like Edward Snowden “traitors”) ought to be entirely disqualifying.

But that detail is not news to emptywheel readers. As I noted in my analysis of the Intelligence Authorization the House just passed, James Clapper would be required to do a report 30 days after the authorization passes telling Congress which “telecoms” aren’t holding your call records for 18 months.

This adds language doing what some versions of USA Freedom tried to requiring DNI to report on which “electronic communications service providers” aren’t hoarding your call records for at least 18 months. He will have to do a report after 30 days listing all that don’t (bizarrely, the bill doesn’t specify what size company this covers, which given the extent of ECSPs in this country could be daunting), and also report to Congress within 15 days if any of them stop hoarding your records.

That there would be so many companies included Clapper would need a list surprised me, a bit. When I analyzed the House Report on the bill, I predicted USAF would pull in anything that might be described as a “call.”

We have every reason to believe the CDR function covers all “calls,” whether telephony or Internet, unlike the existing dragnet. Thus, for better and worse, far more people will be exposed to chaining than under the existing dragnet. It will catch more potential terrorists, but also more innocent people. As a result, far more people will be sucked into the NSA’s maw, indefinitely, for exploitation under all its analytical functions. This raises the chances that an innocent person will get targeted as a false positive.

At the same time, I thought that the report’s usage of “phone company” might limit collection to the providers that had been included — AT&T, Verizon, and Sprint — plus whatever providers cell companies aren’t already using their backbone, as well as the big tech companies that by dint of being handset manufacturers, that is, “phone” companies, could be obligated to turn over messaging records — things like iMessage and Skype metadata.

Nope. According to uber-hawk who believes leakers are traitors Marco Rubio, a “large number” of companies are getting requests.

From that I assume that the IC is sending requests to the entire universe of providers laid out by Verizon Associate General Counsel Michael Woods in his testimony to SSCI in 2014: 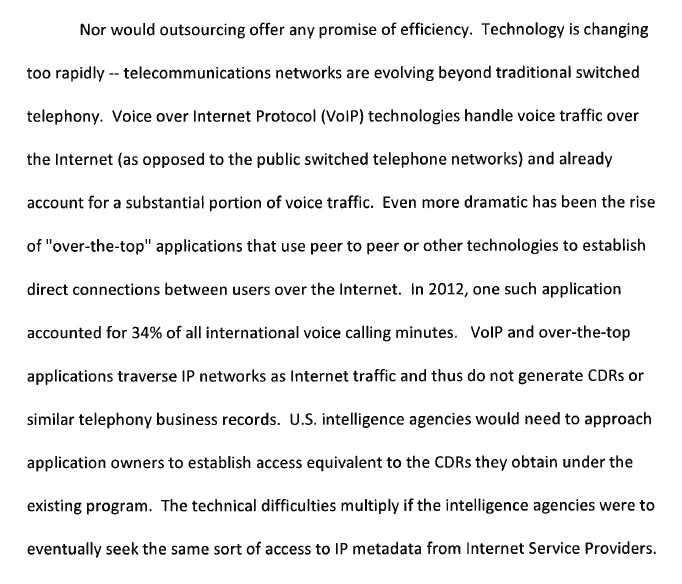 Woods describes Skype (as the application that carried 34% of international minutes in 2012), as well as applications like iMessage and smaller outlets of particular interest like Signal as well as conferencing apps.

So it appears the intelligence committees, because they’re morons who don’t understand technology (and ignored Woods) got themselves in a pickle, because they didn’t realize that if you want full coverage from all “phone” communication, you’re going to have to go well beyond even AT&T, Verizon, Sprint, Apple, Microsoft, and Google (all of which have compliance departments and the infrastructure to keep such records). They are going to try to obtain all the call records, from every little provider, whether or not they actually have the means with which to keep and comply with such requests. Some — Signal might be among them — simply aren’t going to keep records, which is what Rubio is complaining about.

That’s a daunting task — and I can see why Rubio, if he believes that’s what needs to happen, is flustered by it. But, of course, it has nothing to do with the end of the old gap-filled dragnet. Indeed, that daunting problem arises because the new program aspires to be more comprehensive.

In any case, I’m grateful Rubio has done us the favor of laying out precisely what gaps the IC is currently trying to fill, but hawks like Rubio will likely call him a traitor for doing so.