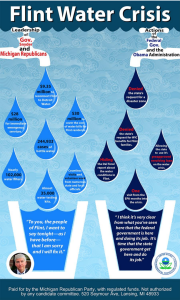 As I’ve noted repeatedly, when independent tests first publicized that decisions made by Governor Snyder’s hand-picked Emergency Manager were poisoning Flint’s children last October, he made a show of response, but it wasn’t until the Task Force he appointed laid into his Department of Environmental Quality and Detroit’s US Attorney revealed it was investigating the problem that Snyder ratcheted up his effort to appear to be responding.

But his actions since then have largely been an attempt to stall for time, presumably a hope that anti-corrosives in Flint’s pipes will bring lead levels down so that we can all move on and forget about it. True, he did get the state legislature to cough up $28 million, which will go to ramping up state agency involvement. He has asked for $30 million to alleviate some, but not all, of Flint residents’ water bills so they’re not paying for water they can’t use, but it’s not clear the legislature will fund it (and it’s just partial relief in any case).

But at the same time, he has asked for bigger funding chunks from the Federal government: $96 million under disaster funding for things including replacing a fraction of the lead pipes in the city, and the expansion of funding for WIC funding for Flint’s children until they’re 10 (which would have improved nutritional support for kids at risk of lead poisoning). The Feds denied both those requests. Snyder and the Republicans are now blaming Obama for denying these requests. Understand: Obama’s administration could only had approved them by violating the terms of these programs set by Congress. Snyder asked for something that, under the law, Obama could not give, and now Snyder is using that denial to try to pawn off responsibility onto Obama, rather than the appointed managers who created this mess and ignored it for over a year.

That leaves the lead pipes in the ground, still leaching toxic levels of lead four months after anti-corrosives were first added to the water to try to reverse the corrosion. Some houses in Flint still have so much lead in the water that filters cannot be trusted to remove the poison.

Michigan’s Senators, Debbie Stabenow and Gary Peters, tried to get $600 million added to a bipartisan energy bill to start the work of actually replacing those pipes. But even revising that request down to $200 million didn’t work, so Democrats filibustered the bill.

Hours later, during the debate, Hillary announced she’d do an appearance in Flint today, which ended a few hours ago.

I will be in Flint at the Mayor’s invitation on Sunday to get an in depth briefing about what is, and is not happening.

This is an emergency. Everyday that goes by that these people, particularly the children, are not tested so we can know what steps must be taken to try to remediate the effects of the poisoning that they have been living with is a day lost in a child’s life. I know from the work that I’ve done over so many years, lead, the toxic nature of lead can affect you brain development, your body development, your behavior.

I absolutely believe that what is being done is not sufficient. We need to be absolutely clear about everything that should be done from today to tomorrow, into the future to try to remedy the terrible burden that the people of Flint are bearing. That includes fixing their pipes, it includes guaranteeing whatever healthcare and educational embellishments they may need going forward, and I think the federal government has way where it can bill the state of Michigan. If Michigan won’t do it, there have to be ways that we can begin to move, and then make them pay for it, and hold them accountable.

Her appearance (which drew no national coverage) had some strong points: She reminded she had worked on lead (paint) issues in New York, she noted that many other cities are suffering from similar problems, she called to get Flint people working to replace the pipes.

She brought up the $200 million Democratic Senators are currently demanding.

I’m completely agnostic about whether this particular trip will hurt or help (it’s very clear that Hillary’s focus on Flint two debates ago helped draw attention, though of course that came months after the lead poisoning was first revealed in October).

It could be that next week Democrats in the Senate will be able to get Republicans to relent to their demand for Flint funding. But it could also be that Republicans will dig in, given that denying Flint funding becomes a way to deprive the presumptive Democratic nominee a win. That’s true, especially since John Cornyn already accused Democrats of trying to embarrass Republicans on this issue.

Republican Majority Whip John Cornyn of Texas called the Democrats’ sudden rejection of what had been bipartisan support for the energy bill “gamesmanship” and an effort to “embarrass Republicans” by making it seem they did not care about Flint.

He said state officials are trying to figure out how much a full infrastructure repair program in the city might cost — an estimate is expected next week — and to authorize full funding before that was “putting the cart before the horse.”

“The State of Michigan and the City of Flint don’t know what they need to do to fix the problem or how much it will cost,” Cornyn said. “The senators form Michigan come in here and say we don’t need to know … we want cash.”

It seems Republicans are stalling, hoping this will fade from view before some Republican legislature — either Federal or state — ends up funding a needed infrastructure program which will not only fix the water problem, but provide a Keynesian boost to a city Republicans would like to cure with more austerity. As months go on, this year’s Presidential and next year’s gubernatorial election will exert pressure of some sort. It may well be that Hillary can use her focus on Flint to showcase a call for more infrastructure funding that will tip some elections. It may also be that the prospect of Hillary on the ballot in November exerts pressure downticket on Republicans.

But for the moment, this seems like uncertain political gamesmanship that could leave Flint residents drinking from plastic bottles for months to come.

Update: I meant to include this quote from a Flint resident, which encapsulates my concern.

“It’s bad news to me,” said Arthur Woodson, a 46-year-old Army veteran who runs New Beginnings, a Flint-based nonprofit aimed at helping soldiers return to the community. “She’s turning it into a political football. The GOP won’t ever do anything now. They’re going to turn it into a partisan thing.”

“This is a water issue,” he continued. “It’s not a political issue. We got kids who are suffering. We don’t have time for this partisan stuff.”

Families and residents in Flint deserve better than being used as political pawns by a Presidential candidate. This visit is not an act of benevolence; it is a calculated campaign tactic – an attempt to grab headlines by a struggling campaign.

It is time to focus on solutions. As a candidate who proclaimed that the enemies she is most proud of are Republicans, I doubt that Hillary Clinton is here to contribute to the bipartisan effort to fix this crisis. The families in Flint deserve solutions, not a stunt that does nothing to help the city or the people who call it home.