Jim Comey, Poker Face, and the Scope of the Clinton Investigation(s) 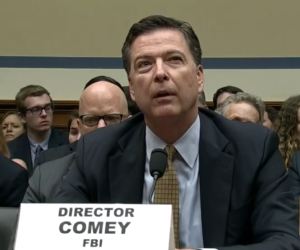 I write this post reluctantly, because I really wish the Hillary investigations would be good and over. But I don’t think they are.

First, understand how this all came about. After the existence of Hillary’s server became known, State’s IG Steve Linick started an investigation into it, largely focused on whether Hillary (and other Secretaries of State) complied with Federal Records Act obligations. In parallel, as intelligence agencies came to complain about State’s redactions of emails released in FOIA response, the Intelligence Committee Inspector General Charles McCullough intervened in the redaction process and referred Clinton to the FBI regarding whether any classified information had been improperly handed. As reported, State will now resume investigating the classification habits of Hillary and her aides, which will likely lead to several of them losing clearance.

This caused some consternation, early on in the hearing, because Republicans familiar with Clinton aides’ sworn testimony to the committee investigating the email server and Benghazi were confused how Comey could say that Hillary was not cleared to have her own server, but aides had testified to the contrary. But Comey explained it very clearly, and repeatedly. While FBI considered the statements of Clinton aides, they did not review their sworn statements to Congress for truth.

That’s important because the committee was largely asking a different question: whether Clinton used her server to avoid oversight, Federal Record Act requirements, the Benghazi investigation, and FOIA. That’s a question the FBI did not review at all. This all became crystal clear in the last minutes of the Comey testimony.

Chaffetz: Was there any evidence of Hillary Clinton attempting to avoid compliance with the Freedom of Information Act?

Comey: That was not the subject of our criminal investigation so I can’t answer that sitting here.

Chaffetz: It’s a violation of law, is it not?

Comey: Yes, my understanding is there are civil statutes that apply to that. I don’t know of a crimin–

Chaffetz: Let’s put some boundaries on this a little bit — what you didn’t look at. You didn’t look at whether or not there was an intention or reality of non-compliance with the Freedom of Information Act.

Having started down this path, Chaffetz basically confirms what Comey had said a number of times throughout the hearing, that FBI didn’t scrutinize the veracity of testimony to the committee because the committee did not make a perjury referral.

Chaffetz: You did not look at testimony that Hillary Clinton gave in the United States Congress, both the House and the Senate?

Comey: To see whether it was perjurious in some respect?

Comey: No we did not.

Comey: Again, I can confirm this but I don’t think we got a referral from Congressional committees, a perjury referral.

Chaffetz: No. It was the Inspector General that initiated this.

Now, let me jump to the punch and predict that OGR will refer at least Hillary’s aides, and maybe Hillary herself, to FBI for lying to Congress. They might even have merit in doing so, as Comey has already said her public claims about being permitted to have her own email (which she repeated to the committee) were not true. Plus, there’s further evidence that Hillary used her own server precisely to maintain control over them (that is, to avoid FOIA).

That said, there are two reasons why Hillary and her aides won’t be prosecuted for lying to Congress: James Clapper and Scott Bloch.

Clapper you all know about. The Director of National Intelligence — unlike Clinton — was not under oath when he spectacularly lied to Ron Wyden. Nor was he referred to DOJ for prosecution. But that recent lie will make FBI hesitate.

DOJ will hesitate even more given the history of Scott Bloch. bmaz has written a slew of posts about this but the short version is that the former Office of Special Counsel lied to this very committee and wiped his hard drive to obscure that fact. He ultimately pled guilty, but when the magistrate handling the case pointed out that the plea carried a minimum one month sentence, Bloch and DOJ went nuts and tried to withdraw his plea. bmaz and a bunch of whistleblowers who had been poorly treated by Bloch went nuts in turn. All to no avail. After DOJ claimed there were secret facts that no one understood, the court agreed to sentence Bloch to just one day in jail.

So FBI will investigate it. Comey might even refer, this time, for prosecution, because the evidence is actually far stronger that Hillary used her own server to avoid oversight (and that she was less than forthcoming about that to Congress). But that, too, won’t be prosecuted because you basically can’t prosecute lying to Congress after the Bloch case.

Which brings me to the funniest part of this exchange with Chaffetz (which, coming as it did in the last minutes of the hearing, has escaped most notice).

Chaffetz: Did you look at the Clinton Foundation?

Comey: I’m not going to comment on the existence or non-existence of any other investigation.

Chaffetz: Was the Clinton Foundation tied into this investigation?

Comey: I’m not going to answer that.

And for what it’s worth, the Clinton Foundation probably couldn’t have been part of the scope of this, given that this was only focused on four to five people (note, a Clinton Foundation investigation would better explain why FBI gave Brian Pagliano immunity, another topic on which Comey would not comment).

But when asked about the Clinton Foundation, he claimed he couldn’t say. All of a sudden, refusal to comment on existence or non-existence of investigation.

Now, I’m just going to say I don’t think anything will come of that, because I doubt FBI would clear Hillary on one issue but not the related one (plus, given SCOTUS’ ruling in the Bob McDonnell case, it probably became impossible to prosecute any Clinton Foundation violations). But Comey’s answer does make it clear that FBI considers questions about improperly handling classified information, avoiding FOIA and other oversight, lying about avoiding FOIA, and deals made with the Clinton Foundation to be different things.

I think that doesn’t change that Hillary won’t be indicted. But I do think she will continue to be investigated in conjunction with questions about what she did and said to avoid FOIA and other oversight.