The Released Trump Dossier Is Not the Complete Dossier

Update: Also note that these reports are not done in the same typeface, with variations between sans serif and serif fonts, changes to margins, and at least one report changing font size mid-report. I’ve marked those below as well, and will continue to work on margin size. I’ve been informed that this is a way the Brits track leakers, which means this copy should be identifiable to a particular leaker.

I want to return to a point I made here about the dossier — billed as an oppo research project — on Donald Trump’s ties to Russia.

This is not the complete dossier. It was selectively released.

The gaps are immediately identifiable from the report numbering, which (as released) goes like this:

You might think some of this is just about pages being out of order but someone — perhaps Buzzfeed? — wrote in page numbers by hand on the lower right.

So the reporting was frequent, sometimes more than daily. It must have started sometime in April, if not before (which explains how a project started by a Republican challenger to Trump ends up with a June 2016 report; we just don’t have the first 79 reports); it’s even possible the earlier reporting included more details on Hillary. Over that time, the reporting protocol changed (no longer identifying each source with a letter). And the reports continue into December, well past the election, and well past the time a Hillary supporter — ostensibly the funder for this project — might want to influence the election.

Reports 94 and 095 are especially weird, as it appears that the temporal sequences is broken. 095 reports on the general scope of the campaign against Hillary. 94 reports on meetings between Carter Page and Igor Sechin.

None of this explains why those gaps exist or what the oddness in reports 94 and 095 stem from. But it is a real reason to question the provenance of the copy BuzzFeed got.

Update: I’ve been informed that these kinds of typeface changes are a way the Brits use to track leakers.

So they may know who the leaker is here.

Here are two screen shots showing the justification and typeface change that happens at report 097. 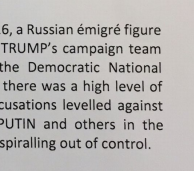 Here’s page one of report 100. The last line seems to extend beyond the right margin.

The next page of report 100 has noticeably smaller typeface and an apparently different left margin.

Report 101 is back to right justified sans typeface, but much smaller than the one used in report 097. These screen caps are both 100X100 pixels.

How Did the IC Allegedly Remain Unaware of a Dossier Widely Shopped in DC? The Trump Dossier Alleges DNC Insiders Were Involved in Anti-Clinton Operat...