When “They” Go Low, The WHCA Grovels In The Gutter With Them 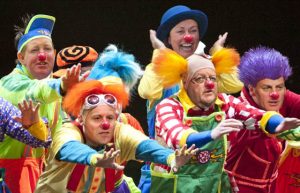 So, Trump accused the American press of being “enemies of the state”:

The White House on Friday barred news outlets — including CNN, the New York Times, Politico and the Los Angeles Times — from attending an off-camera press briefing held by spokesman Sean Spicer, igniting another controversy concerning the relationship between the Trump administration and the media.

Yes, it is so hard to tell, for the press, when all your love is in vain. But it is. From the WaPo:

President Trump will not attend the White House correspondents’ dinner this year.

Trump announced his decision on Twitter late Saturday afternoon. The dinner is scheduled for April 29.

Despite many people long advocating that the White House Correspondents Association get out in front of this, they, via their “leader”, Jeff Mason, remained cluelessly behind the Trumpian Eight Ball. The ostrich like action by Mason and the WHCA is almost comical, if not a total clownshow.

Here is the deal Mr. Mason, if you and the WHCA want to get your collective heads out of your asses, there are a LOT of people that would fund your scholarships at a LOT higher level that you do from your craven “Nerd Prom”.

So, does Jeff Mason and the WHCA continue on in the face of total humiliation, or do they do the right thing, cancel their yearly shitshow, and direct the resultant love to their precious scholarships?

I, personally, will be waiting to hear from the recalcitrant Jeff Mason. America wants to love the press. But not if they are unrepentant stenographer fools. So, Jeff Mason, what kind of leader of the WHCA are you? A stenographer, or a fool? Times have changed. If you cannot, you and the organization you purport to lead are dead fish.