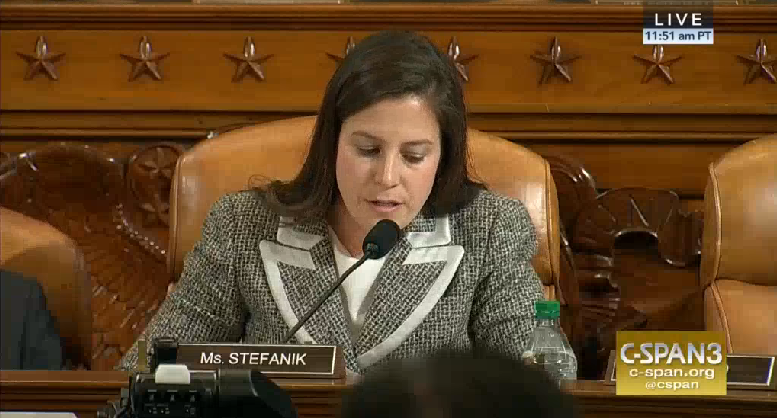 As every newspaper in town has reported, at today’s hearing into Russia’s hack of the DNC, Jim Comey confirmed that the FBI has a counterintelligence investigation into the hack that includes whether Trump’s associates coordinated with Russian actors. Along the way, Comey refused to join in James Clapper’s statement that there was no evidence of collusion between Trump’s aides and Russia. When the now retired Director of National Intelligence said that, Clapper had emphasized that his statement only extended through the end of his service, January 20; he warned that some evidence may have been discovered after that.

A far more telling detail came close to the end of the hearing, during NY Congresswoman Elise Stefanik’s questioning. She started by asking what typical protocols were for informing the DNI, the White House, and senior Congressional leadership about counterintelligence investigations.

Stefanik: My first set of questions are directed at Director Comey. Broadly, when the FBI has any open counterintelligence investigation, what are the typical protocols or procedures for notifying the DNI, the White House, and senior congressional leadership?

Comey: There is a practice of a quarterly briefing on sensitive cases to the Chair and Ranking of the House and Senate Intelligence Committees. The reason I hesitate is, thanks to feedback we’ve gotten, we’re trying to make it better. And that involves a briefing briefing the Department of Justice, I believe the DNI, and the — some portion of the National Security Council at the White House. We brief them before Congress is briefed.

Stefanik: So it’s quarterly for all three, then, senior congressional leadership, the White House, and the DNI?

Comey: I think that’s right. Now that’s by practice, not by rule or by written policy. Which is why, thanks to the Chair and Ranking giving us feedback, we’re trying to tweak it in certain ways.

Stefanik: So since in your opening statement you confirmed that there is a counterintelligence investigation currently open and you also referenced that it started in July, when did  you notify the DNI, the White House, or senior Congressional leadership?

Comey: Congressional leadership, sometime recently — they were briefed on the nature of the investigation and some details, as I said. Obviously the Department of Justice must have been aware of it all along. The DNI … I don’t know what the DNI’s knowledge of it was, because we didn’t have a DNI until Mr. Coats took office and I briefed him his first morning in office.

Stefanik: So just to drill down on this, if the open investigation began in July, and the briefing of Congressional leadership only occurred recently, why was there no notification prior to the recent — the past month.

Comey: I think our decision was it was a matter of such sensitivity that we wouldn’t include it in the quarterly briefings.

Comey: No. It’s usually the decision of the head of our counterintelligence division.

Stefanik: And just again, to get the details on the record, why was the decision not to brief senior congressional leadership until recently, when the investigation had been open since July, a very serious investigation. Why was that decision made to wait months?

Comey: Because of the sensitivity of the matter.

Stefanik then got Comey to reconfirm what the IC report says: that Russia had hacked numerous entities, he would later say over a thousand, including Republican targets.

Stefanik then turned to the Yahoo investigation. She asked whether the FSB officers involved conducted the hack for intelligence purposes — a question Comey refused to answer. He also refused to answer what the FSB did with the information stolen.

Stefanik: Taking a further step back of what’s been in the news recently and I’m referring to the Yahoo hack, the Yahoo data breach, last week the Department of Justice announced it was charging hackers with ties to the FSB in the 2014 data breach. Was this hack done, to your knowledge, for intelligence purposes?

Comey: I can’t say in this forum.

Stefanik: Press reporting indicates the Yahoo hack targeted journalists, dissidents and government officials. Do you know what the FSB did with the information they obtained?

Stefanik: Okay, I understand that.

This is important for a number of reasons, including the evidence that the FSB was hiding their hacking from others in Russia.

Stefanik then turned to the sanctions, asking if Comey had any insight into how the Obama Administration chose who got sanctioned in December — which included Alexsey Belan but not the FSB officers involved (one of whom, Dmitry Dokuchaev, was already under arrest for treason by the time of the sanctions).

Stefanik: How did the Administration determine who to sanction as part of the election hacking? How familiar are [] with that decision process and how is that determination made?

Comey: I don’t know. I’m not familiar with the decision-making process. The FBI is a factual input but I don’t recall — I don’t have any personal knowledge about how the decisions were made about who to sanction.

Again, her interest in this is significant — I’ll explain why in a follow-up.

Stefanik then asked what the intelligence agencies would do going forward to keep entities safe from Russian hacking. As part of the response, Mike Rogers revealed (unsurprisingly) that NSA first learned of FSB’s hacking of those many targets in the summer of 2015.

Finally, Stefanik returned to her original point, when Congress gets briefed on CI investigations. Comey’s response was remarkable.

Stefanik: It seems to me, in my first line of questioning, the more serious a counterintelligence investigation is, that would seem to trigger the need to update not just the White House, the DNI, but also senior congressional leadership. And you stated it was due to the severity. I think moving forward, it seems the most severe and serious investigations should be notified to senior congressional leadership. And with that thanks for your lenience, Mr. Chairman, I yield back.

Comey could have been done with Stefanik yielding back. But instead, he interrupted, and suggested part of the delay had to do with the practice of briefing within the Executive Branch  before briefing Congress.

Which seems to suggest one reason why the FBI delayed briefing the Gang of Four (presumably, this is the Gang of Eight) is because they couldn’t brief all Executive Branch people , and so couldn’t brief Congress without first having briefed the White House.

Which would suggest Mike Flynn may be a very central figure in this investigation.

Update: I’ve corrected my last observation to match Comey’s testimony that the delay had to do with keeping things on a close hold within the Executive Branch. That may be nothing, it may reflect the delay on confirming Dan Coats, it may be Flynn (if you normally brief the NSC, after all the National Security Advisor would be among the first to be briefed), but it also could be Jeff Sessions.

After Three Suggestions of Doctored Data, Alfa Bank Claims They’re Being... When a White Republican Gets Spied On, Privacy Suddenly Matters