Donald Trump has tweeted that he will nominate Christopher Wray, who worked in Bush’s DOJ, to head the FBI.

While most people are noting that Wray is Chris Christie’s personal lawyer in Bridgegate, I’m at least as interested in some of the things he did while at DOJ, as Assistant Attorney General for the Criminal Division.

Wray was on the border of a lot of torture decisions in 2004 — the ACLU database of torture documents is full of entirely redacted documents involving him. 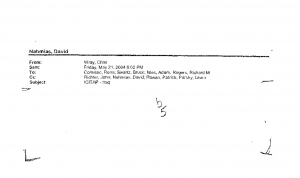 Wray was involved in one of the noted field trips to Gitmo to watch torture.

And he also charged David Passaro, the only CIA person (Passaro was a contractor training Afghans to be paramilitaries) ever charged for torture. DOJ seized a bunch of documents Passaro had which would have shown that CIA’s chain of command had approved torture. Whatever you think of Passaro, I strongly believe he was denied due process in a number of ways.

To Wray’s credit, he was the first to review Stellar Wind data for information that might need to be disclosed as discovery to defendants.

While Assistant Attorney General for the Criminal Division, Wray was involved in negotiations with lawyers for Chiquita (including Eric Holder) that resulted in Chiquita’s executives avoiding all penalties for materially supporting Colombian terrorists.

Finally and probably most importantly, also while AAG DOJ in the early days of the Plame investigation, Wray provided inappropriate briefings to John Ashcroft about what Ashcroft’s buddies had said during FBI interviews.

Among other things, the sources said, Ashcroft was provided extensive details of an FBI interview of Karl Rove, President George W. Bush’s chief political advisor. The two men have enjoyed a close relationship ever since Rove advised the Attorney General during the course of three of Ashcroft’s political campaigns.

The briefings for Ashcroft were conducted by Christopher Wray, a political appointee in charge of the Justice Department’s criminal division, and John Dion, a 30-year career prosecutor who was in charge of the investigation at the time. Neither Wray nor Dion returned phone calls seeking comment for this story.

The briefings raise questions about the appropriateness of Ashcroft’s involvement in the investigation, especially given his longstanding ties to Rove. Senior federal law-enforcement officials have expressed serious concerns among themselves that Ashcroft spent months overseeing the probe and receiving regular briefings regarding a criminal investigation in which the stakes were so high for the Attorney General’s personal friends, political allies, and political party. One told me, “Attorneys General and U.S. Attorneys in the past traditionally recused for far less than this.”

This is what led to Ashcroft’s recusal and the appointment, by Deputy Attorney General Jim Comey, of Patrick Fitzgerald as special counsel.

In short, it seems Wray is likely to ensure that highers up never see any consequences for their actions. And he sure seems likely to keep Trump in the loop on the investigation of Trump.

Update: Here’s a hearing in which Wray got questioned about inappropriate briefings. h/t NW

Update: LOLOL. DOJ released a list of endorsements for Wray, about which I’ll have more to say. But they included an endorsement from the guy who made Wray give him inappropriate briefings.

“Chris Wray is a man of integrity with a deep commitment to the rule of law. His substantial experience, particularly in serving on our Justice Department team fighting terrorism after 9/11, uniquely qualifies him to protect America as FBI Director.”
–Former Attorney General John Ashcroft

If We Have to Have FISA, Can We at Least Not Give It to Contractors? Dan Coats Just Confirmed He Signed the Section 702 Certificate without Even...