Why Is WikiLeaks Reading from ShadowBrokers’ Kaspersky Script?

A few weeks ago, when ShadowBrokers was telling the world they should pay attention to my journalism, I was noting that TSB’s complaints about the Intelligence Community claim it obtained NSA files from Kaspersky were bogus. TSB himself had made such insinuations early in the year.

TSB tries to claim that the Kaspersky stories are a US government attempt to explain how TSB got the files he is dumping. But as I have pointed out — even the NYT story on this did — it doesn’t make sense. That’s true, in part because if the government had identified the files the TAO hacker exposed to Kaspersky in spring 2016 as Shadowbrokers’, they wouldn’t have gone on to suggest the files came from Hal Martin when they arrested him. Mind you, Martin’s case has had a series of continuations, which suggests he may be cooperating, so maybe he confessed to be running Kaspersky on his home machine too? But even there, they’d have known that long before now.

Plus, TSB was the first person to suggest he got his files from Kaspersky. TSB invoked Kaspersky in his first post.

And TSB more directly called out Kaspersky in the 8th message, on January 8, just as the US government was unrolling its reports on the DNC hack.

The latter is a point fsyourmoms made in a post and an Anon made on Twitter; I had made it in an unfinished post I accidentally briefly posted on September 15.

Today, as part of its roll-out of a plan to release, in TSB fashion, the source code behind CIA’s hacking tools, WikiLeaks is similarly focusing on Kaspersky. WikiLeaks released the code for Hive, which it describes as,

a back-end infrastructure malware with a public-facing HTTPS interface which is used by CIA implants to transfer exfiltrated information from target machines to the CIA and to receive commands from its operators to execute specific tasks on the targets.

In its second tweet advertising the new dump, it focused not on the functionality of the code, but on CIA’s use of certificates appearing to be Kaspersky AV to exfiltrate its data. 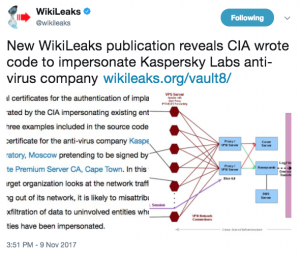 Digital certificates for the authentication of implants are generated by the CIA impersonating existing entities. The three examples included in the source code build a fake certificate for the anti-virus company Kaspersky Laboratory, Moscow pretending to be signed by Thawte Premium Server CA, Cape Town. In this way, if the target organization looks at the network traffic coming out of its network, it is likely to misattribute the CIA exfiltration of data to uninvolved entities whose identities have been impersonated.

The Kaspersky bit is nowhere near the most interesting thing about the release, but it nevertheless is a focus where it hadn’t been when WikiLeaks first introduced Hive.

It seems, then, that WikiLeaks is picking up where TSB’s most recent post left off — not just in dumping US intelligence community toys for others’ use, but to do so while using Kaspersky to confuse issues.

I find the move all the more interesting given the two references TSB made to WikiLeaks’ own dumps, as I laid out in March (at a time when it seemed TSB was done leaking). 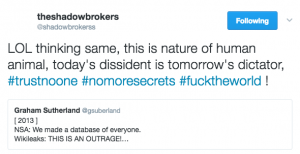 We seem to have come full circle since that moment, with WikiLeaks picking where TSB left off in his last post. Which raises real questions about what this conversation has been about for the last year.

Update: William Ockham notes that Trust No One is a reference to the X Files generally as well as one episode focusing on electronic surveillance.

Is There More to Trump’s Thumbs Up Picture? The Flynn-Turkey Deal Raises the Obstruction Stakes for the Preet Bharara F...