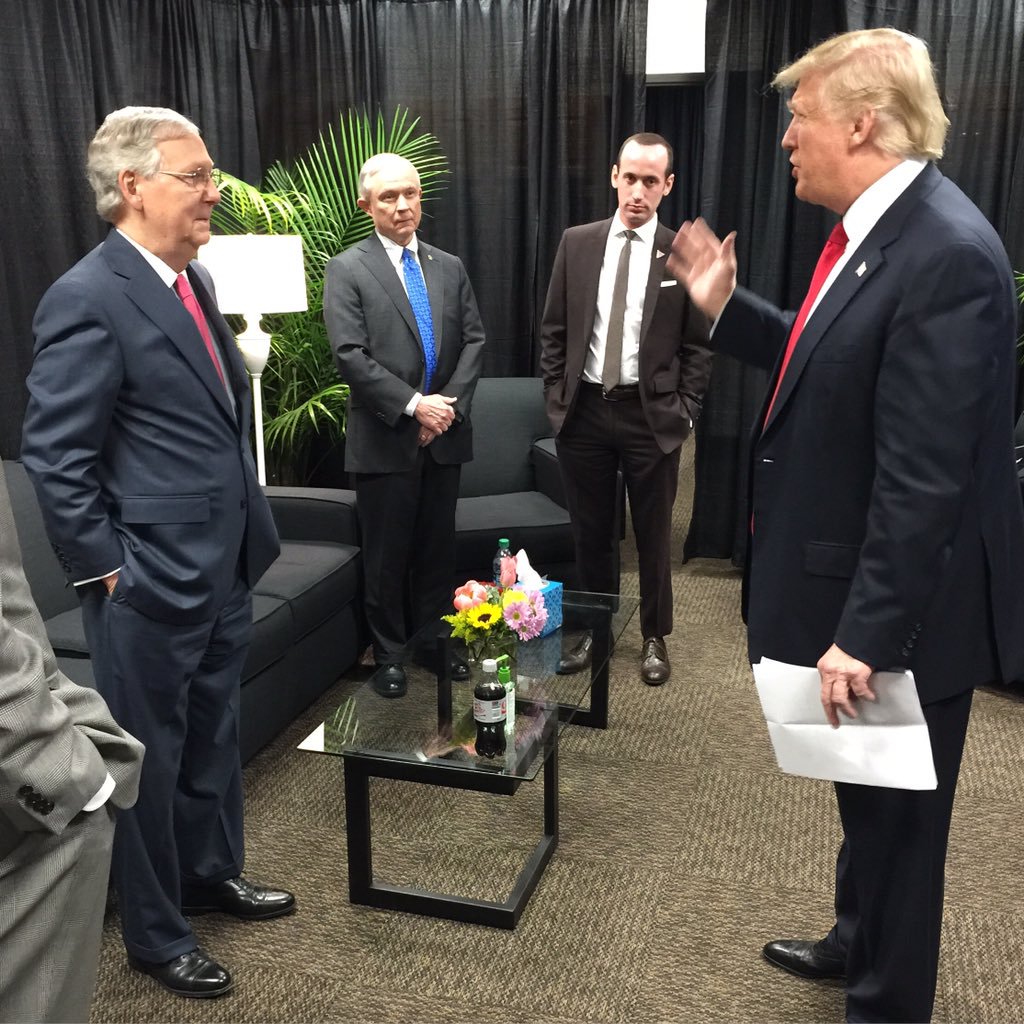 Following Dianne Feinstein’s release of a letter revealing the things Jared Kushner didn’t turn over to the Senate Judiciary Committee, the press has honed in on the things Kushner failed to disclose or lied about. Most interesting is an email chain involving a back channel meeting sought by mobbed up Russian, Aleksander Torshin. While that particular meeting didn’t happen, Don Jr did sit next to Torshin at the NRA convention held in Mitch McConnell’s home town, Louisville (he took the picture above).

An email chain described Aleksander Torshin, a former senator and deputy head of Russia’s central bank who is close to Russian President Vladimir Putin, as wanting Trump to attend an event on the sidelines of a National Rifle Association convention in Louisville, Kentucky, in May 2016, the sources said. The email also suggests Torshin was seeking to meet with a high-level Trump campaign official during the convention, and that he may have had a message for Trump from Putin, the sources said.

Kushner rebuffed the request after receiving a lengthy email exchange about it between a West Virginia man and Trump campaign aide Rick Dearborn, the sources said.

While Kushner told Dearborn and other campaign officials on the email not to accept Torshin’s offer, Torshin was seated with the candidate’s son, Donald Trump Jr., during a private dinner on the sidelines of an NRA event during the convention in Louisville, according to an account Torshin gave to Bloomberg. Congressional investigators have no clear explanation for how that came to be, according to sources familiar with the matter.

But I’m at least as interested in an AP story that may relate to other Kushner disclosures to Congress. It reports that in June of this year, two participants in the June 9, 2016 Trump Tower meeting, Rinat Akhmetshin and Ike Kaveladze met in Moscow.

Akhmetshin told congressional investigators that he asked for the Moscow meeting with Kaveladze to argue that they should go public with the details of the Trump Tower meeting before they were caught up in a media maelstrom. Akhmetshin also told the investigators that Kaveladze said people in Trump’s orbit were asking about Akhmetshin’s background, the person said.

Scott Balber, a lawyer for Kaveladze, confirmed that his client and Akhmetshin met over coffee and that the Trump Tower meeting a year earlier was “obviously discussed.”

Investigators wonder whether they met to orchestrate a limited hangout before the meeting otherwise came out.

Balber denied his client had been contacted by associates of Trump before he took the meeting with Akhmetshin, or had been aware of plans to disclose the Trump Tower gathering to the U.S. government.

Balber said the men did not discuss strategy or how to line up their stories, and did not meet in anticipation of the Trump Tower meeting becoming public and attracting a barrage of news media attention.

He said Akhmetshin did convey during coffee the possibility that his name could come out in connection with the Trump Tower meeting and cause additional, unwanted scrutiny given that he had been linked in earlier news reports to Russian military intelligence, coverage that Akhmetshin considered unfair. Akhmetshin has denied ongoing ties with Russian intelligence, but acknowledged that he served in the Soviet military in the late 1980s as part of a counterintelligence unit.

“That was the impetus,” Balber said of the men’s get-together. “It had absolutely nothing to do with anticipation of the meeting coming out in the press.”

There are three things the AP story doesn’t mention, however.

Previously, the leak of the June 9 meeting had been tied to document submission — by Jared Kushner and Paul Manafort — to Congress.

The Trump Tower meeting was not disclosed to government officials until recently, when Mr. Kushner, who is also a senior White House aide, filed a revised version of a form required to obtain a security clearance.

Mr. Manafort, the former campaign chairman, also recently disclosed the meeting, and Donald Trump Jr.’s role in organizing it, to congressional investigators who had questions about his foreign contacts, according to people familiar with the events.

That might explain why investigators would suspect the meeting was designed to arrange testimony: because it roughly coincided with the admission to the meeting by Kushner and Manafort.

The AP also doesn’t note that Scott Balber, Kaveladze’s (and the Agalarov’s) lawyer, represented Trump in a lawsuit in 2013 (the same year that Agalarov brought Trump’s Miss Universe contest to Moscow).

Nor does it mention that Balber has orchestrated at least two other stories about this meeting: First, an October blitz performing a limited hangout of the emails and oppo research that Natalia Veselnitskaya purportedly brought to the meeting (which, as I noted should have focused on Balber’s role in massaging Veselnitskaya’s story).

But here’s the bigger question. Why would an American lawyer who has previously represented Trump need to fly to Russia to meet with Veselnitskaya personally? This email chain and the talking points could very easily be sent — but weren’t. So why did Balber need to solidify stories with Veselnitskaya in person? And what is the provenance of the emails as presented, stripped of any forensic information?

So while it’s clear Trump’s former lawyer wants to change the spin around this story, it seems to me the takeaway should be,

BREAKING: LAWYER WITH PAST TIES TO TRUMP FLEW TO RUSSIA TO COORDINATE STORIES WITH NATALIA VESELNITSKAYA

Donald Trump Jr. has dismissed Mr. Goldstone’s emails as “goosed-up.” Mr. Balber blamed miscommunication among those arranging the meeting. “Mr. Agalarov unequivocally, absolutely, never spoke to Mr. Chaika or his office about these issues,” he said.

So orchestrating a meeting between Rinat Akhmetshin and Ike Kaveladze would make three attempts, on sometime Trump and current Agalarov lawyer Scott Balber’s part, to craft a story about the June 9 meeting.

There are other reasons I know of to suspect that Balber’s story is total crap, but they’ll have to wait.

Remember that in his telegraphed testimony, Don Jr claimed he couldn’t recall the presence of Akhmetshin.

I’m more interesting in the things the forgetful 39 year old could not recall. While his phone records show he spoke to Emin Agalarov, the rock star son of Aras Agalarov, who has been dangling real estate deals in Russia for the Trumps for some time, for example, he doesn’t recall what was discussed.

Three days later, on June 6th, Rob contacted me again about scheduling a time for a call with Emin. My phone records show three very short phone calls between Emin and me between June 6th and 7th. I do not recall speaking to Emin. It is possible that we left each other voice mail messages. I simply do not remember.

He also doesn’t recall whether he discussed the meeting, after the fact, with Jared, Manafort, or (the unspoken “anyone else” here is pregnant) Pops.

The meeting lasted 20-30 minutes and Rob, Emin and I never discussed the meeting again. I do not recall ever discussing it with Jared, Paul or anyone else. In short, I gave it no further thought

Once we find out he did discuss it with Pops and others, he can say he’s stupid and we’ll all believe him.

Most interesting, to me, is his claim to only recall seven participants in the meeting.

As I recall, at or around 4 pm, Rob Goldstone came up to our offices and entered our conference room with a lawyer who I now know to be Natalia Veselnitskaya. Joining them was a translator and a man who was introduced to me as Irakli Kaveladze. After a few minutes, Jared and Paul joined. While numerous press outlets have reported that there were a total of eight people present at the meeting, I only recall seven. Because Rob was able to bring the entire group up by only giving his name to the security guard in the lobby, I had no advance warning regarding who or how many people would be attending. There is no attendance log to refer back to and I did not take notes.

The unstated subtext here is even more pregnant. Don Jr accounts for seven of the participants in this meeting:

So what he really means to say is he doesn’t recall the presence of Rinat Akhmetshin, who has ties to Russian intelligence and a history of fending off accusations of hacking.

Finally, remember that Veselnitskaya was in touch with Agalarov in advance of the meeting, at the same time that Trump Jr was having phone calls — the substance of which he simply can’t remember — with the younger Agalarov.

All of which is to say that the efforts of the last month feel like a limited hangout — an attempt to avoid potentially more damaging revelations with new admissions about Magnitsky. That’s not to say the Magnitsky discussion didn’t happen. It’s to say the potential admissions — down to Veselnitskaya’s claim that, “I definitely don’t have!” information on Russian hacking and interference — have gotten far more damaging since when, in July, she claimed the election didn’t come up.

At the very least, it seems the players — particularly the Trump sponsor Agalarovs  are concerned about what Rob Goldstone has had to say to whatever investigative body — and are now trying to cement a different more damning one, yet one that still stops short of what they might admit to.

In either case, another thing seems clear: Veselnitskaya attempted to come to the country, using the same method she did when she actually used her presence to pitch Don Jr. After that meeting was denied, Trump went from suggesting he might meet with Putin to confirming that he plans to.

Earlier today, NBC reported that Rob Goldstone is preparing to come to the US (bizarrely showing willingness to come here rather than remain in Thailand where extraditions are possible but challenging) to meet with Mueller’s team.

From all this, I suspect that Jared’s delayed disclosures may hide other, far more damning ones.