War crimes are being committed on a daily basis in Yemen and the world barely takes notice. Consider this outdated report from the World Food Programme in August: 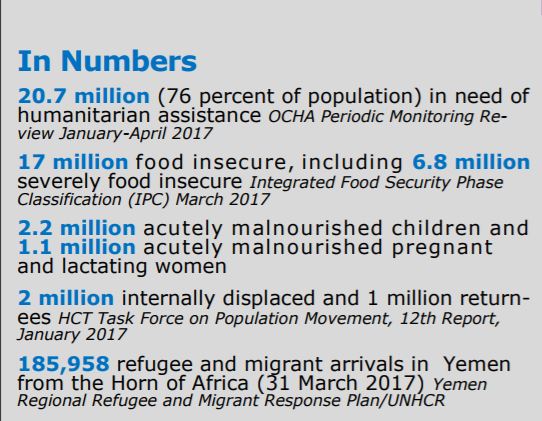 Back in August, fully 76% of the population, over 20 million people, were in need of humanitarian assistance. And that was before the first of two missiles were fired into Saudi Arabia from Yemen, prompting an even tighter blockade of aid by the Saudis. The outrageously sadistic, immoral and illegal bombardment of Yemen has now been going on for 1000 days. A large group of international figures has come together to note this sad milestone and to call for an end to the violence, but the world is not listening. A small note in The Hill has this description of the pitifully small number of US politicians who joined in the effort:

“The U.S., U.K. and France, as permanent members of the U.N. Security Council and major weapons suppliers to Saudi Arabia and the United Arab Emirates, bear a special responsibility to use the full extent of their leverage to press their partners in the region to end the crisis,” read the statement, dubbed “A global call to President Trump, Prime Minister May and President Macron.”

The usually war-loving Washington Post editorial staff also noted the atrocities a month ago, but to very little effect. A new effort, led by Ted Lieu, is aimed at getting the blockade lifted.

Although it is the Saudis who are doing the bulk of the bombing, the US and several EU countries are primary enablers of the atrocities. Here is Donald Trump in Saudi Arabia in May, signing a $100 billion military aid agreement with the Saudis: 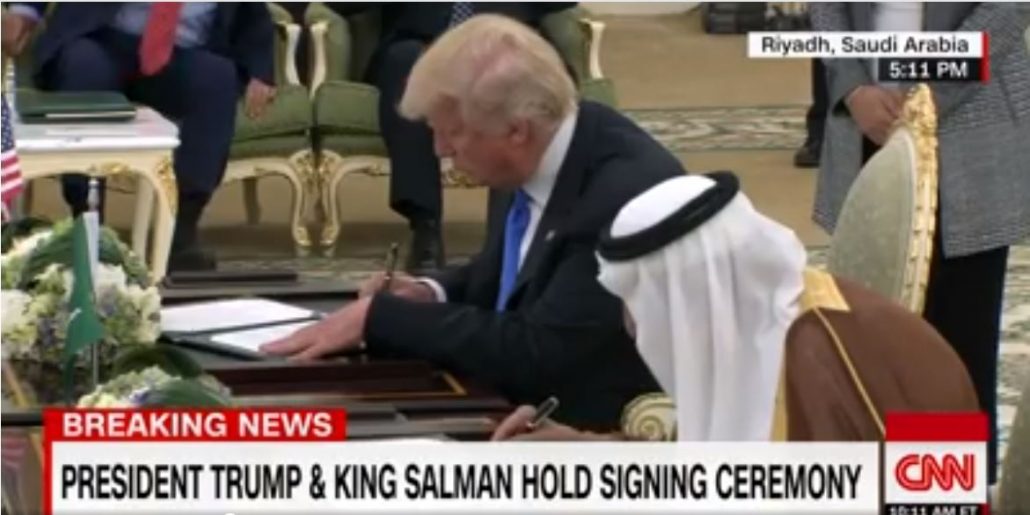 Those are American-made fighters dropping American-made bombs on defenseless Yemeni citizens every day. Reuters reported earlier this week that 136 Yemeni civilians died in air strikes in less than a two week period this month.

But deaths from bombs or starvation are not the only problems. Because the Saudis intentionally targeted infrastructure, including the water supply, cholera cases in Yemen have been reaching unprecedented levels. The disgusting milestone of one million cholera cases has now been reached.

Rather than helping the Yemenis, Trump is actively working to make the situation worse, with the US itself carrying out over 120 air strikes this year and even admitting to ground operations by US troops. Recall that our first ground operation there under Trump was a miserable failure:

In the first offensive operation personally approved by Trump, a Jan. 28 raid in Yemen resulted in the death of a Navy SEAL, the wounding of several other service members and the destruction of an MV-22 Osprey tilt-rotor aircraft.

And, of course, Trump and Nikki Haley see no irony in their massive over-response to the two missiles that have been fired into Saudi Arabia during this 1000 day Saudi and US blitzkrieg:

The U.S. has been providing intelligence and aerial refueling to the Saudis. Last week, United Nations Ambassador Nikki Haley used the charred remnants of a ballistic missile with Iranian markings as a backdrop to call on Iran to stop supporting the Houthis.

If you have any spare cash left over from your holiday shopping, please consider a donation to try to ease the widespread starvation in Yemen. Somehow, while there are still tens of billions of dollars in US weapons sales in play, I just don’t see any reason to think the Trump administration will take any action to back up their gentle calls for the Saudis to lift the blockade.

Fake Russian Metadata that Will Do Nothing to Prevent Nuclear War Congress Should Revert to Section 702 as Passed in 2008, If That’s What...